Observations And Notations During The Time Of Coronavirus

When I walked past No Man Lord's place this morning I noticed that he had spelled out Jesus alongside a huge cross, all made from slices of bread. Well, part of the upright beam on the cross wasn't made of slices, but of loaves of french bread. I don't know how many bags of bread that message had required. And why? Had someone given him stale bread that he didn't want to eat? Was it moldy? Did he have so much bread that he decided to make a sort of art with some? Was it a sacrifice? Was he casting his bread not upon the waters but on the front yard?
I do not know and I did not ask.
I just walked on thinking that this made as much sense as anything seems to right now.

I am truly stuck in some sort of fog. I cannot commit to any project. I honestly do not know what I do all day. I didn't get the bed made until one o'clock this afternoon. I did fill up the teen chicks' feeder and waterer and I knew I wanted to cut up some greens and grapes and make some scrambled eggs for all of the chickens and this took me half the day to finally get around to. The little chicks were not so impressed but the big ones were happy with the bounty from the human. 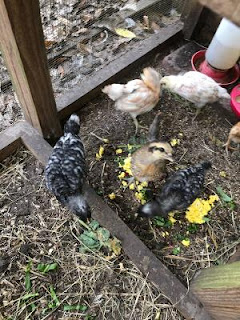 From what I'd read yesterday scrambled eggs are another thing that helps with paste butt and I figured- why not? And the little banties that I cleaned up yesterday seem to be fine, their butts nice and poop-free. I think they even look more energetic.

When I got in from my walk I entered the yard from the front gate and immediately saw this. 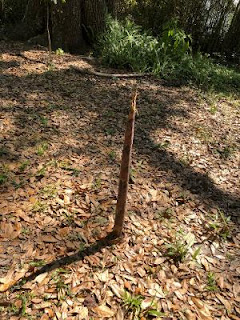 It was about three feet tall.
Oh shit, I thought. I hadn't checked, much less kicked any bamboo in days. 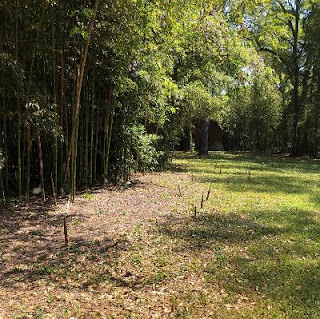 After I hung the clothes I went out to the side yard. I know it's hard to see but there must be dozens of shoots coming up from the one-inch size to the two or three foot size. I sighed with the perceived effort of doing what had to be done but I did it. I walked through my little office yard and it is in dire, dire need of weeding and pruning and tidying up and usually, that sort of project sort of excites me. It feels so good when I get it done. But right now, I just want to burn it all. Not really. That would be too much effort. I just want to hide my head in the sand and let the invasives take over.

I suppose my problem in general is that I want to hide my head in the sand. It would be one thing if it were just Mr. Moon and me but I have these children, these grandchildren to worry about and I can't really allow myself to think of Lily working at Publix, completely unable to keep a six-foot distance between her and customers, or of Jessie, working in the hospital. The reality of how contagious this virus is is way too frightening. The reality of people, even young people dying, is too much. And as these unavoidable facts become far more real every day, I seem to go deeper into a sort of dissociative fog.

I did get my sewing machine out of its case today. I ran a bobbin and started working on my dress, feeling guilty all the while because I am not making masks. The reality of that project seems too unbelievable to even contemplate. It's like my mother, telling me about "knittin' for Britain" during the war when women knit everywhere, even in dark movie theaters, making bandages for British soldiers. Are we really at this place where people are making masks for medical professionals out of our scraps?
Yes. Yes we are.
And this is another project that god knows I really should take on.

Two days ago I filed my nails.
My hair is relatively clean. I washed it yesterday when I got back from the stores. Psychological benefit only, I am sure. This is as much as I've accomplished in days. I am absolutely only doing the bare minimum to keep this house running, to keep us fed, to maintain at least some semblance of civilization.
My husband, meanwhile, is staying busy. He went crossbow turkey hunting this morning but he forgot to take his arrows. I think he really only wanted to get away to the woods. This is a good thing. He's been working in the garden all afternoon. 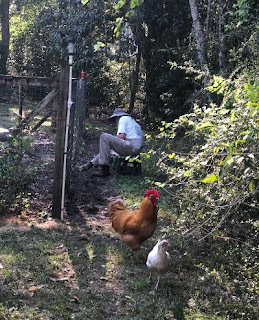 The mosquitos have been eating him alive. A week and a day after spring began and we are in summer.

Gibson called me a little while ago. He frequently butt dials me so I was sort of surprised when he was really on the line. He'd stepped on a tack and I think he needed some sympathy. I have him a lot of that, knowing exactly how that feels and the horror of realizing that a tack is stuck into your foot and knowing it must be pulled out. I also told him to wash it very, very well and to have someone put a little antibiotic ointment on it.
"Does antibiotic ointment sting?" he asked.
"No. It doesn't sting at all," I told him.
"Okay," he said. "Thank you, Mer."

And those few moments were the sharpest, clearest moments of my entire day.

Here's my poor little wild azalea that blooms so late and less profusely than all of the rest of them. 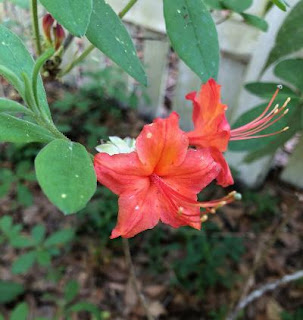 But it's a relatively rare one, orange instead of the usual ballerina pink and white and I cherish it.

And in an entirely unrelated matter, if you are panting for distraction, I recommend you watch Netflicks' newest documentary series, Tiger King. Murder, Mayhem, and Madness.
You may not feel good about yourself when you find that you are unable to turn away from the dump fire that it is, but I can almost guarantee that you'll be fascinated, even as you may become nauseous, creeped out, and stunned. Never a dull moment in this one!
Here's the trailer.


In case you haven't noticed, we live in a very strange world.
Now, of course, more than ever.

Still. We go on.
Thank god I can still cook.