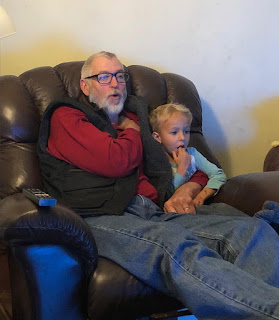 Last night was another enchanted evening. Like I said- I can't believe we went out two nights in a row but it just had to be done.
Factors:
1. I ALWAYS love to hear Lis and Lon playing. Always. I've never regretted going to see them, ever.
2. It was important to me that all of the L&L Super Fans (and there are many) know that I am always going to be there. Or, at least mostly. Because if the Moons didn't show up, it would just not be right.
3. I love many of the L&L Super Fans. Honest to god- it's always good to see them.
And last but not least:
4. Two weeks ago I ordered a dress that I had thought to wear on Valentine's but alas, it did not come before we left for Apalachicola. It is rather a fancy dress. Well, very simple and plain but black velvet. When we drove back to Lloyd yesterday Lis said, "Go by the post office and see if your dress got here." And I did.
And it had.
Therefore, knowing that if I didn't wear it last night I wouldn't have another opportunity until next winter, I simply had to seize the opportunity.

Now here's a very Tallahassee thing that happened. On the way home yesterday Lis and I were talking about a mutual friend. She delivered both Lily and Jessie as my homebirth midwife and was actually with me when I had May and also, throughout almost all of my very, very long labor with Hank. We're talking someone I've known since 1974. This woman is also a musician and played in my ex's band at one point and I adore her. Lily's labor, especially, was a very hard one and there was shoulder dystocia and she had a nuchal hand AND she weighed over ten pounds. When I finally got her born, it took her a few minutes to start breathing, to decide whether or not to stay, and this woman, my midwife, handled it all beautifully and calmly, and she was my angel.
So as I said, Lis and I were talking about her and one of her sisters and I said that it had been so long since I'd seen her and then of course, as these things go, there she was sitting right next to us at the Blue Tavern when we got seated. With her sisters.
And so I suppose that's also a reason I went but I wasn't aware of it beforehand.

After all of that last night (Lis made me cry with one of her songs during the FIRST set) we all got good sleep and then Jessie and the boys came over this morning for pancakes. And bacon. And sausage. Lon and Lis ARE Jessie's Fairy Godparents, as you know.
Lis and Jessie and I got breakfast all together and the men/boys went to the Glen Den to watch TV. We kept hearing great peals of laughter. I went in to see Boppy and August sitting in Boppy's chair and Lon and Levon on the couch. 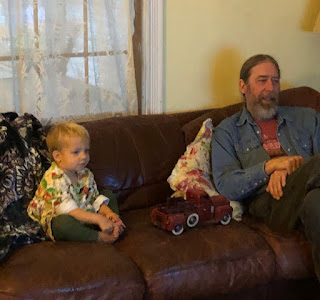 They were watching Mighty Little Bheam and having a fine time. Meanwhile, of course, we ladies were giggling in the kitchen like the bad girls we are.
We are. Bad girls. You just have no idea. In fact, we are probably the best bad girls you ever would like to meet.

And then breakfast happened. 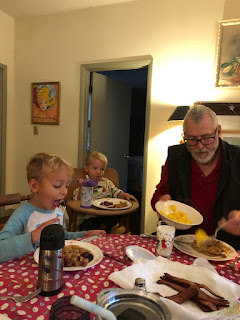 And then the Williamsons had to pack up and leave because as we speak, they are playing in St. Augustine.
I have no idea how they do it.
I was going to sit on the couch all afternoon and crochet but instead I started doing housewife stuff and by the time I was ready to sit on the couch, I only had time to untangle some wool and didn't crochet a stitch.

It's been raining all day. The frogs are singing. Supper is cooking.
I'm going to be at Jessie's tomorrow at nine to watch the boys because Vergil's getting a little surgical procedure done. No worries. He's fine. And Mr. Moon? Well, he has to get up at three to drive to the airport to get on a flight to Ft. Lauderdale to GO GET THAT VAN!
Different airline. Hopefully better result.
He jokingly tried to persuade me to drive him to the airport but I refused. I said, "Sure, if your life depended on it. Which it does not."
So I made him cookies which is almost as good, right?

There you go. That's what I've been doing. Crying at songs and at good-byes. Cooking and giggling and sharing hearts and thanking a midwife once again for her part in the life of my family. Kissing little boy heads when I get the chance, wearing make-up and shiny jewelry including my silver bangles. Seeing people I rarely see and getting good, good hugs. The kind of hugs that really mean it. Being forced out of my rut and routine into a richer and more colorful spectrum of life.
Loving and being loved.
Isn't that something? I think it is.