Another Day, Another Batch Of Thoughts 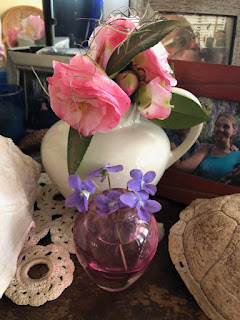 On my walk this morning I came across a patch of purple violets. They were the first I've seen this year. The white ones always come out before their more passionate kin. I picked a few and brought them home and set them in that pretty little round vase.

I had not left Lloyd since last Thursday and today I felt like if I didn't get out into the world I might truly never be able to do it again and so I got my house-wifey stuff done, my walk done, and drove to town. First I went to the Coop where there was good news and bad news.
The good news was that I didn't run into anyone I didn't want to run into- i.e., almost anyone I know.
The bad news is that I also didn't get to see Billy because he was busy and on the phone and that made me sad.
After that trip I stopped at the apartment where May and Michael are moving today and dropped off a plant and a card at what I hoped was their back door. I have since found out that it was. I Sherlock Holmed it. Then I drove over to Jessie's house where I handed over some pajamas that I'd gotten for the boys. They came from Costco and were too perfect to leave there. The ones I got Levon had heavy equipment on them and the ones I got August had sloths. He sleeps with a sloth every night. I visited for a few minutes. Vergil is finally starting to feel better. It's been a rough recovery for the boy. And Jessie was getting ready to go to a job interview. She is thinking about working a day or two a week to keep her toe in the water which is wise because if you don't do that as a nurse, technology and changes can get way far ahead of you.
And then on I went to a plant nursery where I bought seed potatoes and seeds. The easy part of the spring garden. Buying them, I mean. Not the planting. I am late with both the potatoes and the peas and the onions. All of them. I need to get busy.
And finally- Publix. This time I did run into someone but she was working there and had her name tag on so it wasn't too hard to remember her and we had a little chat.

When I got home I was so tired that after I'd put everything away I laid down for small sleep and it was harder to pull myself out of that than it had been to get out of bed this morning. But I finally did. Mr. Moon was home but he left soon after to go to a basketball game. This has been a very good year for FSU basketball and he and our friend Tom have been faithful and enthusiastic attendees of all the games. They watch the ones that are not played here on our TV and as I go about my business I can hear them cheering and clapping. They are happy guys when they watch good basketball.

I have been thinking more about the whole childbirth thing and specifically the pain associated with it. I remembered when a friend of mine (the woman who ended up being my midwife for Lily and Jessie) had a baby at the hospital in 1974 or '75 without being medicated for pain. She had used Lamaze and this was such a crazy, unheard of thing here that the Tallahassee Democrat did an article about her!
This is the absolute truth.
That's how deeply ingrained it was in our culture that women absolutely needed drugs in order to do what women had been doing since the dawn of time. And we won't even get into what we were led to believe about our ability to breast feed.
But after my labor with Hank I tried very hard to come up with an explanation of how something so common and experienced by every mother on earth had to be so incredibly difficult.
Was the Bible right? Was Eve so sinful that all of her female descendants had to experience pain as punishment and judgement?
Nah.
So what was it? Why was it?
The only answer I could come up with (and I have written about this theory before) is that when a woman is in labor it is quite common for her to be so overwhelmed by what she's going through that she can't focus on the baby inside of her. She can remember that the reason she's going through all of this in order to have her baby but the pain is intense and the baby is still a rather vague entity.
However, the second the baby is born, all of the mother's attention snaps to the child.
And the pain usually ceases as if a light switch had been flipped.
And so, in a way, the sight of her baby and the sudden cessation of pain create a feeling within that mother that it wasn't the baby that caused the pain but it was indeed the baby's arrival and presence which caused it to stop.
This makes sense to me.
And of course, not all women experience childbirth as pain or choose to have epidurals which cause the pain to disappear and there are Caesarian births which necessitate the use of an epidural and the mothers in these cases don't have that same pain-ceasing association with the baby. It's certainly not THE thing which makes a mother view her child as precious and miraculous but it may be one thing. One part of the many layers of brain-changes and body-changes which involve hormones and instinct and all of the things we experience that cause us to fall in love with our babies.
I've never seen any research about this at all. But it cannot be simply that human female pelvises are too...something...to allow for the type of birth that we have almost all seen in pet dogs or cats.
I know that for me, knowing what I had been through to get these babies of mine delivered made me want to protect them all the more.

Well, that's my theory. I wonder what Ina May would say about it?

To add a little more thought to this, it was when women began to ask for and receive unmedicated births that a lot of the changes in hospital practices occurred. When I was born, almost all mothers were given a drug called Scopolamine. It didn't exactly eliminate pain but it did erase the memory of it, along with the memory of the birth, from the mothers. They still felt the pain and reacted to it- thus the restraints that used to be on every delivery table.
But once women were no longer wiped of the memories of what they had endured in labor, they were more apt to want to be treated like human beings, not chunks of muscle and meat. And being able to remember the moment of birth rather than waking up from a dream-state with a nurse's reassurance that yes, they had indeed had a baby and that they would be allowed to see it when it was feeding time, changed everything.

All right. That is entirely enough. 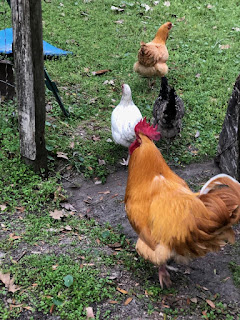 Escorting chickens out of the garden.