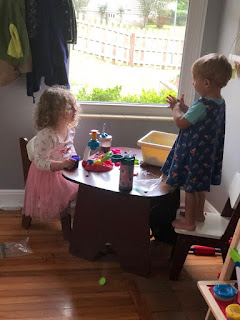 Mr. Moon left here early this morning to get a flight to Ft. Lauderdale to pick up a van he bought for a customer. The flight was supposed to leave at 9:55. I left somewhat later to go to Jessie's where she was taking care of Maggie for Lily who was going on a field trip with Owen's class. I felt as if I had no energy and luckily, Maggie and Levon were happy playmates who entertained themselves for the most part and I just sat around and chatted with Jessie while she went about her day. Levon was wearing the fox dress that I made for his brother last year. Jessie said he loves it. He looked very fine with it on and it did not interfere with his mechanical duties in the least. 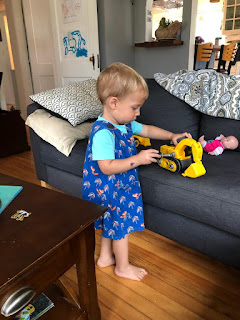 He kept bringing me huge books about trucks and cars and things-that-go. He told me what everything was and when I misidentified something he let me know. But mostly he and Magnolia played with play dough. That girl played for at least two hours with the stuff. Her focus and ability to stick to a project is amazing for a four-year old. 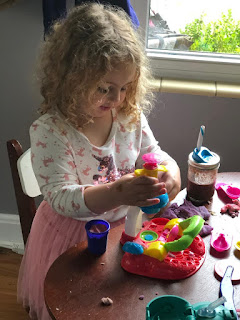 She was wearing a beautiful twirly skirt and a shirt with a unicorn on it. She gave us a few concerts, playing first the ukelele and then the piano. Sometimes she danced while she played, sometimes she sang, and sometimes she did all three at the same time. Her songs all began, "When I grow up..."
She clarified that to me later saying, "When I grow up I'll be FIVE!"
"Yes," I said. "Yes you will."
One of her songs also had the line, "And Mer Mer is my love."
I almost died.

August was at school and when Jessie went to get him and brought him in he had no eyes or time for me. He had his Valentines from school and y'all- there was CANDY in that bag. He shared it around generously. Jessie kept trying to get him to let her read his Valentines to him but that wasn't very interesting.
I mean- candy.

All this time I kept getting texts from Mr. Moon. His flight to Ft. Lauderdale was delayed and delayed and delayed. Finally, at 3:00 it was canceled entirely.
So he'd been in the Tallahassee airport for over five and a half hours waiting for a flight that never left.
I would have been screaming but he took it all in stride.

I left Jessie's when Lily got back from the field trip and picked up Maggie who did NOT want to leave her cousins and their great toys.
I left and went to Costco to pick up some cherry tomatoes for a meal I'm going to cook tomorrow. Of course I found a few other things I needed and bought them too. But nothing crazy like a ten-pound wheel of cheddar or a flat of toilet paper or a yard waste-sized bag of organic quinoa chips. 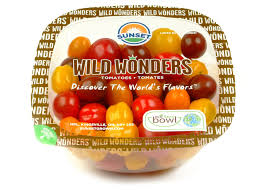 Have you bought those tomatoes before? They are so good. Not only are they great in salads but I throw them in half the stuff I cook. The dish I'm planning on cooking is Seared Scallop Pasta with Burst Tomatoes and Herbs. The description includes this: "Toss them (the scallops) with pasta and candy-colored cherry tomatoes that burst and get coaxed into a jammy sauce."
I have noticed that "jammy" is a favorite word of some of the creators of recipes in the New York Times app. It's a little precious for me but it is fairly descriptive of the way the tomatoes end up. So yes, I had to get my cherry tomatoes. To coax. Into a jammy sauce.

I guess it's best to coax these things, not force them or speak to them with vehemence. "Come on, you sweet little 'maters! You can do it! Get all jammy now!"
And so forth.