Kids And Music And Books. A Pretty Good Remedy

Today was another day of sheer knuckle-whitening as I held on and did what needed to be done. The anxiety was almost overwhelming but I took my walk, I went to Publix, I made our supper for tonight. A huge pot of the squash and sweet potato and cashew goodness that we love so much and a beautiful loaf of sourdough.
I got the supper ready early because we were to attend first a book fair and then a concert of Gibson's at the his and Owen's school this evening.
Mr. Moon got home early and we drove to the school which is not very far from where we live, actually, and met up with the Hartmann's and tried to help the boys pick out their books and then they picked the ones they wanted and Magnolia got one too. While we were there I asked Gibson how it was going with Aida, the little girl he told the Beauty Parlor lady all about when they spent the night.
"Are you in love?" I asked.
"Yes," he said.
But she's been sick lately and so he hasn't been able to woo his lady.
"Maybe tomorrow," he said wistfully.
"I hope so, I told him."
Then it was time for the concert and off we went to the cafetorium.
I have attended quite a few events in this room in the past four years and I have to say it's one of the most boring spaces I've ever been in. White walls, fluorescent lights. One wall with something inspirational written on it.
Tables. Chairs.
The end.
The stage does have red velvet-like curtains so that's a treat.

Anyway, here's a picture Lily asked me to take of her and her Mini-Me before the house lights dimmed. 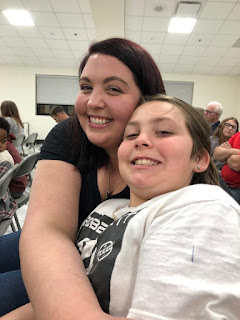 Owen sort of hates that and sort of loves it.

Now. If you recall, Owen hates performing with every molecule of his being. Not only does he hate performing, he can't bear watching anyone else he knows do it. It's always been a part of who he is. As I've said before, even when he was a very young sprout, if any of us started singing or dancing he'd say, "Stop it! Stop it!"
So when the stage curtains opened the there was his brother on the top row and the singing began and Gibson was doing what Gibson does which is to give it his all, Owen almost lost his mind. He hid his head in his mother's bosom.
But Gibson was having the time of his life. 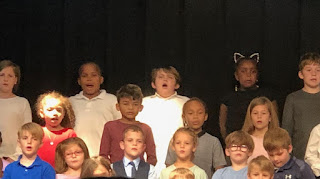 He sang with gusto! He sang with full and generous expression! He sang with joy!
The concert's theme seemed to center on hearts which is appropriate in that Valentine's Day is coming up. The songs were all about inclusivity and love for our fellow humans and it was sweet. 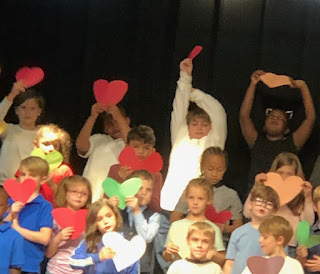 Between that and Maggie sitting on my lap and then hopping off and then coming back to sit again and talking to Owen I found myself in a completely different headspace. I felt cheered and far less anxious. I felt...better.
I swear, just a few hours ago I contemplated calling Lily to tell her that I just couldn't make it tonight.
I am so glad I didn't.

Now we're home and I'm heating up the soup and will slice the bread.

We shall see what tomorrow brings.