Could I Be Bitchier? Oh, Yes. Yes I Could 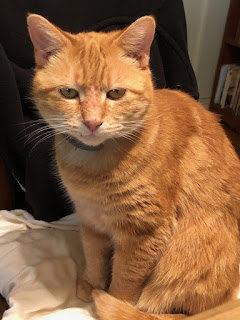 There's Maurice, aka Scratch, aka Scratchy, aka The Hell Bitch.
She was sweet today, though, and followed me around as I did yard work. I think this is when I like Maurice best- when we are outside together and just hanging out, her pretending we're simply in the same places by sheer coincidence, me wearing gloves so that if I decide to pet her and she turns on me and tries to bite my hand off, I have some protection. I say "some" protection because she can draw blood through a glove, no problem and has done before.
But today things were peaceful between us. I picked up downed branches and twigs and she helpfully pointed more out for me. I swear, I think she did this on purpose. I was about to pick up one quite large branch but had to wait while she she walked the length of it as delicately as a ballet dancer following the spotlight in toe shoes.
Besides picking up branches and hauling them to the burn pile, I pulled some of the rice paper plants which I used to find attractive but now find horrific as they, like almost everything else I did not plant in this yard, have taken over like the spawn of King Kong. And they become rather immense, not to mention the fact that when you pull them they let go of some sort of plant dust (I don't even think it's pollen) that causes the puller to choke and cough.
I swear. I'm about to give up on all of it. I can't stay on top of the invasives and that's all there is to it. I did discover that the Trillium is not only up but is also blooming. 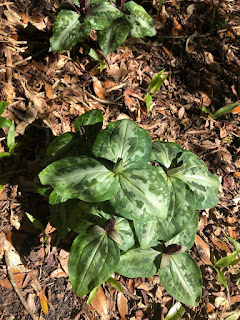 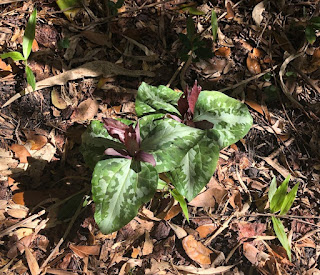 So lovely. And so very shy and well-behaved. 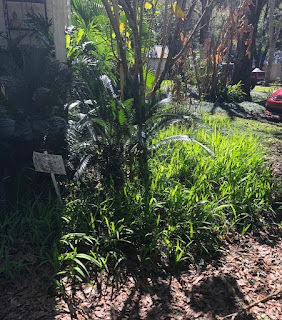 See all those lily-like blades glowing in the sun? That's them. I spent hours pulling most of what you see there. I pulled three-quarters of a large garden cart-full of them. Guess what? It won't fucking matter. They'll be back. I know I didn't get the corms of all of them and besides that, there were plenty of those little buggers that haven't sprouted yet.

Sometimes I think that I'm going to be spending the rest of my years on this planet trying to keep the invasive plants down to a reasonable level and for what? FOR WHAT?
I despair.
And today was already a day of despair to be honest.
As I walked around the yard picking up this, pulling out that, I saw so much that needs to be done. The Confederate Jasmine (which I admit I planted) needs its annual severe cut-back and that's such a messy, yucky job. The plant oozes a sticky white sap when it's cut and untangling the vines of it can make you crazy. That's an entire day's project. The Glory Bower is another invasive I can't possibly keep up with. What started out as a curious (to me) looking plant in one tiny part of the side yard that had a lovely purple/pink bloom has become my mortal enemy. I had a feeling that might happen when I noticed the same plant growing beside a restaurant we used to eat at frequently. It had completely covered at least an acre of a vacant lot and I got a little shiver of fear. Wasn't long after that when I noticed that it was popping up everywhere in my yard.
EVERYWHERE.
And I, stupidly, pulled and pulled it and dumped the plants in one spot next to the garage where there is now a forest of them.
Also? It stinks. Literally.
Now I dump the ones I pull on the burn pile which upsets my husband because there's not enough "accelerant" as he calls it, in the world to burn the fuckers. They just smother the fire.
And that reminds me that I have now seen the truly dangerous fireweed in places in the yard where I've never seen it before.

So. I spent an entire day, which was truly a glorious day with a clear sky and cool temperatures, cursing and swearing and bemoaning my fate, wishing I had a tiny house at the beach where nothing grows except for possibly a palm tree or a sea grape or herbs and flowers in pots.
Oh wait. I just remembered sandspurs which do actually grow at the beach and which have tormented me my entire life in Florida.

So much for that idea.

I did just go shut the chickens up and the full moon rising almost knocked me to my knees. Although I am not sure, I don't think that global climate change is going to fuck the moon up. It may be wreaking havoc on our environment on both personal and universal levels but that moon- she's there. I imagine that she's looking down on us with amused disdain but she's going to be just fine.

And I want to add one more thing- I got the sweetest card in the real mail from Charlotte in Texas and that was absolutely the most positive, purely good thing that happened today.
Thank-you, Charlotte. I have shared your message with Steve Reed.

Oh wait! Here's my first crocheted potholder. I feel as if I have now reentered childhood. 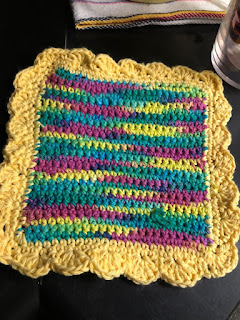 Isn't that ridiculously cheerful and childlike?
Yes. Yes it is.

Go look at the moon if that's a possibility.