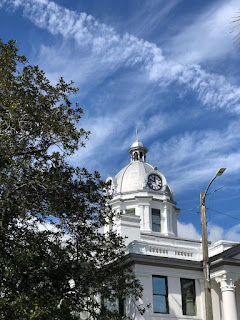 Today was Self-Care Day Two and off I went to Monticello with Lily and the Princess Magnolia June where we met Jessie and the boys. It was story hour at the library and we were excited!
Well, at least I was.
Ms. Courtney read a few very nice stories. I think my favorite was Dino Duckling by Alison Murray. 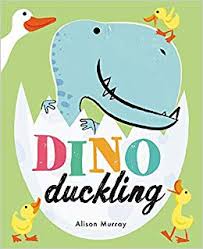 It's a sweet story about how there is plenty of room and a place for everyone within a family. To me, one of the very best things about having grandchildren is the opportunity it presents for enjoying children's books once again. I loved them as a child, I loved them when my children were little and now I get to love them again.
The rhythm sticks were passed around and we used them to sing The Wheels on the Bus. 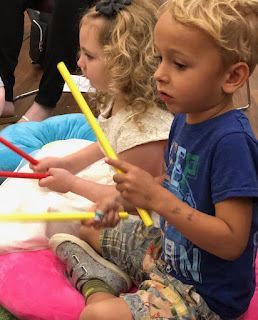 The children took this very seriously, as you can see.
There was one little girl there who had red curls and the expression on her face as this was going on was priceless. She looked as if she could not possibly believe that we were all participating in such a ridiculous exercise and I silently prophesied that her mother and father are not going to have an easy time of it when she hits puberty.
Not that any of us do but this child has a good head start on the entire process of separating herself from her parents.
She was just not having it.
There was a baby there, probably about five or six months old who was just sitting up well and he was the absolute model of a happy baby. He squealed and beat his little hands on his knees and chortled and grinned. He gave me joy.
Levon was fascinated with Terez and kept staring at him. He also did not want to leave his mama's lap. 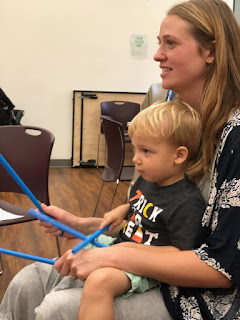 Which was fine.
After the books and the singing it was time to do the arts and crafts and everyone made little flower bouquets which involved cutting and glueing.
August's was the best because he did it all his own way. Don't tell anyone I said that but it's true. Also, he is a master with the glue stick.

And then we proceeded to play in the kid computer room and the kid book room and Levon found his favorite books again and wanted to take them home AGAIN and of course, I checked them out. This will be the third time he's checked out one book about heavy equipment. I kept offering to read to him but he'd climb up on a chair clutching his books and say, "I read it myself."
Okay, Levon.

Soon enough we were all hungry and we checked out and I felt like a rock star in that when I went to give Mr. Terez my card he said, "I got you, Ms. Moon." No card needed!

I have to say that the Monticello library story hour is just about my idea of heaven. Babies, toddlers, books, nice people.

Maggie wanted to go to the "block restaurant" and so we did. We went wild today and ordered fried pickles. They're not as good as fried onion rings but they're good. While we waited, the children played with the blocks. We always eat at the same table outside, right next to where the blocks are stacked and it works out wonderfully well. Levon can keep on eye on the traffic where the round-about goes right by around the courthouse and there are a myriad of different trucks for him to admire and comment on. 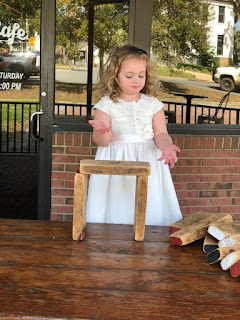 Maggie made an ice cream store. Here she is presenting it to me. 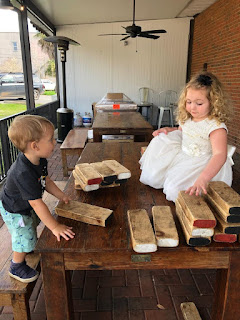 She and Levon were working together on whatever this project is. They make roads and buildings and they create play around what they've built. It's a beautiful thing.

And then the food came and we all shared bites and used hot sauce liberally and August even asked for some of the tomato on my grilled Mahi-Mahi sandwich. And then he ate some of my sandwich. He and Levon got fried fish and Maggie ate fried chicken. Everyone ate fried pickles and french fries.
Yes. We can detect a theme here.

Then off to home we all went. I gave Lily the baby carrots from yesterday's thinnings for the boys to eat after school and then...I took a nap.
I may be completely restored now.

Mr. Moon seems to be sick. Well, he is sick. Some sort of sinus-cold thing. He is prone to get one of those every year at this time. When he got home tonight and I was hugging him he said, "I wanted to come home today."
"Well why didn't you?" I asked him.
"Because I had work to do," he sighed.
That man.

Another day in a life. So similar to so many others that I feel certain you could write one of these reports yourself.
Writing Exercise: Describe a day in Monticello with Ms. Moon and two of her daughters.

And yet. And yet.
Each one precious to me.