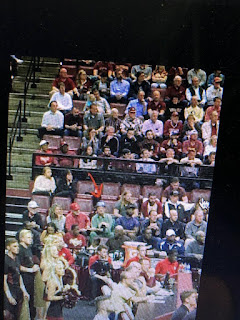 Last night when Mr. Moon was at the basketball game, I came across a startling (and for me, thrilling) fact while perusing Facebook. Guess who was at the FSU/Louisville game?
I mean, besides my husband.
Can you tell from that picture?
Here's a better one. 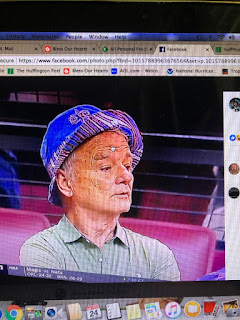 And then this one! 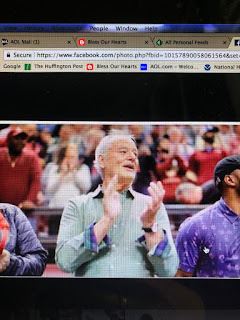 So I started texting Mr. Moon WITH the pictures and eventually, he checked his phone and saw them. And yep, he could see him too but he'd had no idea before he got my texts.
Murray's son Luke is an assistant coach for Louisville and so there you go. Bill was there supporting his boy.

I told Glen that if he ran into Bill to please ask him to come and spend the night. The sheets on the guest bed were clean.
Can you imagine the fine breakfast I would have made him?
Lord, Lord.
I could almost imagine this happening.
Sadly, it didn't.

When I woke up this morning with no need to make a five star breakfast, I instead did some chores around here and took the trash and recycle and made a quiche with our eggs and kale and rainbow chard from the garden and baked a loaf of sourdough that was ready to go into the oven.
One of my oldest, dearest friends was coming for a short visit. Less than a year ago her beloved, talented husband of many, many years died and I hadn't seen her since before he got sick.
The last time we saw the two of them was in Apalachicola where her husband was playing at the Dixie Theater and we'd gone to see him and then met them the next morning for breakfast.
They were the most handsome couple and like all long-married couples, they had experienced the joys and the sorrows together and their lives were entwined in every way. They raised four beautiful children and he played music all over the world and she traveled every mile of it with him that she could.
I haven't been able to imagine how in the world she's managing to get on with her life.
I'll just say that she is, and that she is grace-filled and I admire her more now than I ever have which was already a whole hell of a lot.
Her visit meant a great deal to me. Far more than I can say. I love her tremendously.

And...I'm getting sick. I believe I'm getting the crud that Mr. Moon has had despite the fact that I have been telling myself that no, I would not get it just as I have not gotten the strep or the flu that I have been exposed to. Nope, not me.
But.
I've been coughing up stuff that shouldn't be in a human body and if Mr. Moon is any indication, this is not going to disappear over night. It seems to be a virus that turns your body into a mucus-making organism for its own pleasure. He's still fighting it. Or succumbing to it. I don't think there's a whole lot of fighting one can do with this shit.

So. There is that.

Off to make our supper. Dessert is already done. I took the rest of the pie pastry left over from my quiche and made a lemon chess pie so no matter what happens, there will be pie in this house.
That's sensible, right?
I think so.