Friends Who Hold Us Together 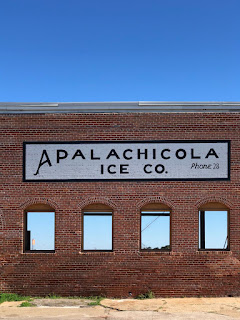 Well, here we are, still in the middle of the Great Valentine's Weekend and I think that Mr. Moon and I are going to continue the festivities by going out tonight to see Lon and Lis perform again but this time in Tallahassee.
I know. I KNOW! I can't believe it either.

Last night was very fine in Apalachicola. The concert was in an art gallery and it was a lovely and appreciative crowd in a great space. This gallery puts on concerts once a month and they set out wine and finger foods and everyone is there simply to listen which is the best sort of audience.
My ex-husband and his wife showed up as they were in town already. He's doing his rock god thing tonight in Apalach himself. So it was good to see them.
The only problem with the entire situation was that I had called the Gibson Inn beforehand to see what time they closed down their kitchen for the bar menu, knowing that it would be late before we got there and I was completely misinformed by whoever answered the call. I swear- I have witnesses. We'd had a late lunch but by the time we got to the bar it was ten and we were hungry.
Too bad for us.
They were, however, serving drinks still.
Of course.
So all was not lost.
Lis and I could not believe that we'd come away from home without so much as a snack between us.
And by the time we got to breakfast this morning after the band had packed up the car and Lis and I had visited our favorite shop- Downtown Books and Purl- we were too late for that, either!
Oh well. We ate lunch.

Here's a picture I took at a liquor store when we went in to buy tonic and ice. 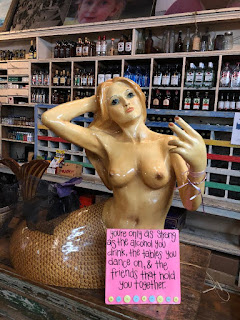 I'm not sure about the wisdom on the little sign and I've never danced on a table in my life (I swear!) but I couldn't pass up the mermaid. Man, I'd love to have her in my house. Who wouldn't?!
(Again, I am being quite serious here.)

So I guess I better go get dressed.

I hope Lis and Lon know how much I love them. I think they do.