Shelter From The Storm 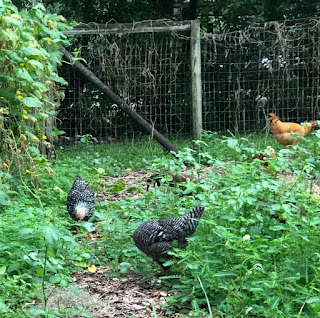 The chooks and I spent some time in the garden today, me weeding and they searching and scratching for tasty delicious things. I love having them close by as I work on my knees. We are on a more equatable level and they are as busy and as focused as I am as we go about our various activities. Believe it or not, I have almost the entire garden weeded and I have not given up on it entirely. 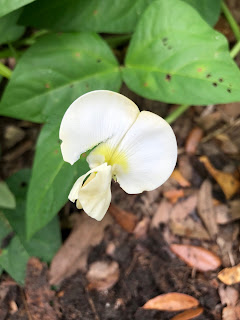 I'm sure you don't remember (and why in the world should you?) but I planted a row of zipper cream peas from last year's stock of seed and they have come up nicely and are now blooming. Isn't that just a lovely little bloom? 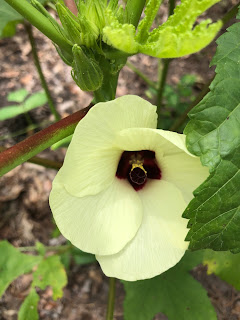 And look what else is blooming! The okra! Not only do the blooms look like hibiscus but so do the leaves and they should as they are related. My plants are standing strong and tall and actually look very good this summer. Perhaps even though I planted so late they will give me a lovely harvest. God knows that if I pickle nothing else, I really have to pickle some okra and I will do so even if I have to buy the pods. I just looked up the origins of okra and it would appear that it comes from Ethiopia and that the Egyptians cultivated it. As a child I had a child's opinion of the okra but as I got older and ate it properly prepared and learned to cook it myself, I have a much more enthusiastic feeling about it. It is a delicious vegetable and lends itself beautifully to stewing with tomatoes and onions and to cooking in soups and stews and of course, gumbo, which is actually another name for okra but honestly, I will just tell you that if you are ever in a restaurant which has fried okra on the menu, just order it. Don't even hesitate.

So I was pondering okra and cream peas and chickens and weeds and realized that either I was going blind or it was getting dark. I mean dark-like-night. Which it was. And then suddenly a wind whipped up and frothed the tree branches and I heard an ominous crack from the walnut tree between the garage and the garden, and the thunder which had been booming distantly suddenly grew much closer and the chickens looked up and then scurried as fast as they could out of gate and ran towards the trailer they like to take cover under and I myself hastily stood up and took off my gloves and wheeled the cart full of weeds I'd pulled out to the yard, thinking I'd go dump it where I dump the weeds but that wind made me rethink my plan and I abandoned it right where it stood and walked to the house where I found my own shelter.
The wind continued to blow with great force and then the rain began, slight at first and then it came down as if it were being slammed from the sky and it grew even darker and I thrilled with it all.
A real true summer storm! It was gorgeous!

Mr. Moon, who had been in town, got home when things had slacked off and said, "Did you get the tornado warning?" and I had not. The thought of a tornado had not crossed my mind and it didn't matter because we hadn't had one and then, after the worst of it was over, our power went out. Of course.

It was sort of beautiful. I found a headlamp and got on my bed and read for awhile until I got drowsy and was just ready to put my book down and settle in for a nap when the power came back on so I turned on my fan and took that nap anyway. It was very, very short but luxurious and deep and when I woke up I found Mr. Moon asleep in his chair and we slowly came back to consciousness and to what we'd been doing before the weather did its sleepy magic.

Mr. Moon cleaned his fish and is going to grill us two whole small snappers. I am going to stuff them with fresh oregano and thyme and lemons and salt and pepper. My husband has requested some "fluffy rice" (which means white rice) that he can put butter on and there will be a salad. Simple, simple, simple.

And so I guess what I'm saying is that it's been a practically perfect day here in Lloyd.
I hope you've had a good one too.