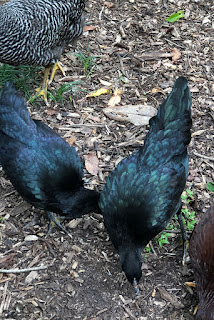 I am constantly amazed at how beautifully iridescent the feathers on the two black jungle fowl are. Vera and Viv. As far as I can see, they're identical twins and I can't possibly tell them apart. But look at those greens and blues! I mean- Lord! They are like subtle peacocks if you just take the time to look. Every morning when I open the door to the hen house and throw scratch for them, I like to just stand and watch all of the chooks for a few minutes. They delight me in so many ways. The hen behind them that you can only see a small part of is my barred rock, Babette. She's a handsome thing. As they all are.

I finally got into the garden and did a little weeding today. It was somehow incredibly satisfying despite the fact that I was dripping sweat and I mean literally dripping. I worked for perhaps an hour and then came in and cooled off and went back out later when there was a bit of cloud covering. It thundered off in the distance and I urged the rain on in my mind but it never came. Just the same heat and the same humidity and I sweated some more. By the time I came in from that I was soaked and dirty and had a few ant bites but I got the black-eyed peas weeded and the eggplant and a few of the tomatoes and now I've had a shower which set me right again.

August is here now to spend the night and Jessie said that when she told him he was coming he was so excited and he said that he was going to get a small car and drive here himself. Not a "little" car but a small one. For some reason this just charms me. I suppose it's because of the visual image I have of tiny August with his golden crazy hair sitting in a small convertible and making his way from Tallahassee to Lloyd. This reminds me of the time that Owen got mad because his mama wouldn't bring him to see us and he said that he would just walk here. The image I have there is of a very young Owen with a hobo bundle over his shoulder, pulling a wagon with a baby Gibson in it.
Determined grandsons I have! 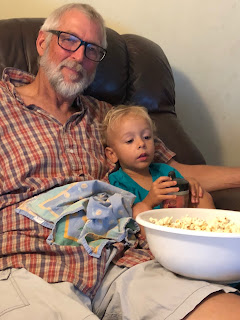 Big Boppy and Little Boppy, sitting in the recliner with a bowl of popcorn as big as August is, watching Moana. I also gave the boy a cup of chocolate milk because I know he loves it so much. Yes, grandparents are allowed to spoil their grands. It is in the handbook. Of course, I would never give a grandchild anything that his or her parents truly forbade and I would not let them do anything dangerous or crazy no matter how much they begged but a little chocolate milk and some TV with Grandfather never hurt anyone.
Right?
I think that what we call spoiling our grandchildren is mostly about simply focusting on them and doing stuff with them, untied to the everyday chores of life for the most part. While they are here, it's all about them and who doesn't love that?

The chickens are running to the hen house to roost. It is time according to their mysterious and wise internal clocks. They go to bed just as the nighttime predators are waking up and rubbing their empty bellies with paws and wings and making their dining plans for the night.
Maurice is napping on the table where I am writing this, preparing for another night of sleep. She's still coming to our bed at night to cuddle with me and I am still appreciating it. I do not know how she and Jack have worked this out but he's taken her place in the kitchen to sleep and she's taken his in the bed.
I suppose Maurice had some stern words with him that he took to heart.

And so it goes and so it is and I'm going to cook us some very fresh fish tonight and I hope that August likes it. Mr. Moon did indeed get to keep his grouper as well as some Vermillion Snapper which I have never personally seen or cooked and we will be enjoying all of it so much. I will do my best to honor it, which is what I say whenever I cook something that Mr. Moon has brought home from the woods or the water. I try to honor what we grow and what the hens lay us as well. It's not just a matter of good cooking, it is also a matter of respect and gratitude and I mean that with all of my heart.

May we all sleep well and deeply tonight, including August. I keep asking him if he wants to sleep in the big bed in the guest room instead of the pack-n-play which is becoming a little small for him but no, the pack-n-play is his bed and that is that. I won't tell him that Maggie feels the same about it.
It is August's when he is here and it is Maggie's when she is here and that is the way it is.
Again, these things are in the grandparent's handbook which is locked away in our hearts until that first grandbaby is born.
Trust me.