A Few Critters I Love, Human and Non- 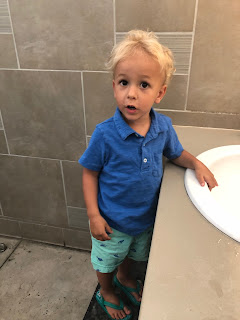 August in the New Leaf restroom where they keep a stool under the sink so that little people can wash their hands by themselves. He had the crazy hair today.

I had things I had to do this morning involving the whole banking situation and a few other things so I bailed on a walk and did some of those things, although I could not seem to get my online banking figured out for the new account which led to huge frustration and goddammit! This seems to be an ongoing problem with all things done online. Okay, not all, but many. It always reminds me of when they first started pay-at-the-pump at gas stations and my friend Lynn tried to use the new technology and she couldn't get the damn thing to accept payment via her card so she went into the convenience store and said to the clerk, "This whole thing would be really cool IF IT FUCKING WORKED!"
That's how I feel about many things these days which are supposed to save us vast amounts of time and energy and yet so often seem to lead to nothing but frustration and a feeling of abject failure.
And that's what happened to me this morning.
So anyway, after a certain point I admitted defeat and hung the clothes on the line (which I am very good at and which never makes me feel like an idiot) and then got dressed and went to town to have lunch with Rachel and Hank and Jessie and Levon and August Boppy Glinden. This is what he told Jessie his name was the other day. I hadn't seen any of these people for perhaps a week or more and I was suffering.
We all met at El Patron, of course, and August immediately told me that he wanted me to tell him the story of the fairy who turns into a frog.
I have no knowledge of this story but I made up a story about a fairy named Frederick who had a mama and daddy fairy as well as a brother fairy and who met a frog named Frank. No fairies turned into frogs in the story but Frank did teach the fairy family to swim and the fairy daddy did let Frank hop on his back and he flew him around so that he could see what it was like to fly.
August seemed to accept this story and he sat happily on my lap as I told it.
He was Mer's boy today. He even initiated a kissing game and I do believe I got more kisses from him at lunch today than all of the kisses I've gotten from him combined. It was awesome.
After lunch, Jessie and I went to the New Leaf where we bought a few things including a small bottle of chocolate milk for August which he adores. "Cow chocolate milk," he calls it. As opposed to say, rice chocolate milk or almond chocolate milk.
Then we went to Ross so that Jessie could look at clothes while I could help with the boys and I had the best time, pushing August around in the cart as he drank his milk and we had long conversations.
It was very cool.
And Jessie found a wonderful little mermaid dress for Magnolia which was purchased. It's such a Maggie dress although August did point out that the mermaid has no eyes. 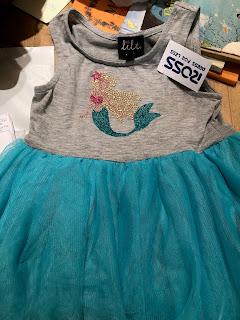 Which is only slightly disturbing.

We said good-bye in the parking lot and I got this picture of the pure peach of a boy, Levon. 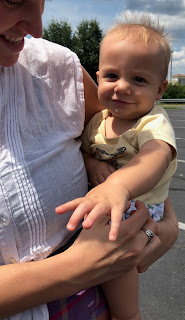 Tomorrow I am going to go babysit for them and I promised to bring August a book about fairies which I will read to him and I already found it and it is ready to go. Let us hope I don't forget it.

And the rest of my day was just regular stuff.
When I went out to the garden to see if there was anything worth picking, I discovered that the black-eyed peas are making pods. 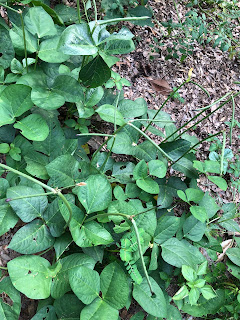 Every time I go out there I want nothing more than to put on my overalls on, find my trowel and get on my knees to pull weeds. It's weird. I mean, it's a sort of compulsion. And I should! But it's so fucking hot. Still, I'm going to do it soon. I can't stand to see my garden so untidy. The okra is coming along but has not bloomed yet, I am getting squash and Italian eggplant, a few peppers and a few cukes and there is still hope for the tomatoes but nothing outstanding. This time last year I was making pickles as fast as I could bring the water in the canning kettle to a boil.
It's different every year.

Here's a picture of Ringo. 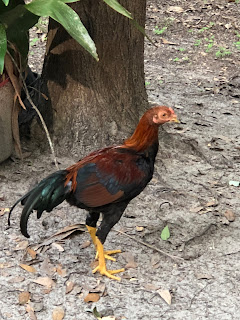 I just love that little rooster. He enchants me. Such a colorful tiny dinosaur. Mick's tail feathers continue to grow and I am so happy about that. I just hope with all of my heart that he and Ringo are able to co-exist. At least Mick is a bit older and more mature and hopefully, won't be so dang obsessive about keeping the hens to himself.
We shall see.
So far, it is a peaceable kingdom with the old flock and the new and I would love to see that continue.
When I start getting eggs from the new hens you will probably be able to hear my screams of joy from wherever you are. I am almost inappropriately looking forward to this. Have I said this before? Probably more times than I can count.
Do I talk about my chickens too much?
Even after all this time of keeping chickens, I still can't get over how much I love them, how interesting I find them, how they make me somehow feel complete in a way I can't begin to describe. All I can say is- if you're debating getting chickens and you have the proper space and ability to keep them, I'd advise you to do it. They are my emotional support animals, my delight, and my producers of pretty, perfect protein.
I wonder who the first woman was to somehow convince a wild bird to stay in her yard and eat her scraps and lay eggs for the family. There should be tributes to her in every country in the world. Statues, poems, songs, and paintings as well as legends, myths, and entire religions dedicated to her worship.

Well. That's what I think.

And at last report, May was doing very well. Thanks for all the sweet messages to my girl.