Don't Make Me Stop This Car 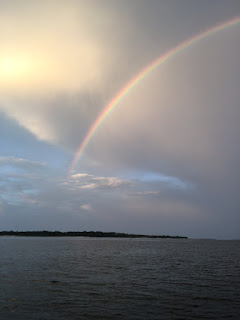 That's the picture Mr. Moon sent me this morning when he was going offshore to fish. Isn't it beautiful? I love having a husband whose favorite things to do involve him going out onto the ocean or a river or into the woods. There's something about knowing that he cherishes being outside and in the beauty of all of that which makes me love him even more. He is my Viking, my Daniel Boone. And sometimes, he's my Chip Gaines, too because he can fix almost anything and he sure can build things. From chicken coops to beautiful tiled bathrooms to the support system for a whole family- he is not afraid.
And he leaves me love notes almost every morning.
Yeah. I'm so damn lucky it's crazy.

The headset saga continued today and I'm almost embarrassed to admit what happened but what the hell? Maybe someone will get a laugh out of it.

I picked up Lily and her kids this morning and we went to Target where I was going to check out their headset situation. Lily wanted to stay in the car with the kids because they can get pretty rowdy in Target. So in I went, straight to the section where they sell stuff like that and I had to wait on the only guy around to help me as he was helping some other people decide on a tablet and he had the keys to get the headsets unscrewed from the wall and when he finally got to me, I told him the Reader's Digest Condensed version of my search for decent wireless headphones and he listened and he suggested I get a pair of extremely reasonable Sony's which were on sale and he said, "I'd bet money you'll be happy with these. I had a pair myself."
So. Okay. Bought them.

Then I went to lunch with Lily and Owen and Gibson and Maggie where we met up with a friend of ours who has moved to Maryland but who was in town for a short visit and it was so wonderful. The boys love Mark and I do too. He's a family member in all of our eyes and he calls me "Mama" so you know I love him to pieces. He talks Legos with the boys and they eat up every word. He's sort of a Lego fanatic. 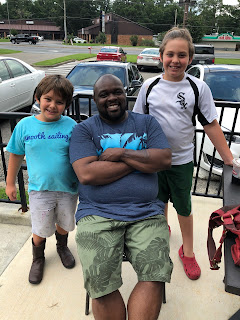 In the boys' eyes, he is the Lego Master Supreme of the Universe. And they love him. Not only does he know everything about Legos but he listens to them. Actually pays attention and listens. They love him so much they posed with him.
About twenty minutes after we'd said our good-byes to him, Owen said, "Is it weird that I already miss Mark?"
"Nope," I said. "It isn't."

But wait! I was talking about my headphones. So no, I did not open them in the parking lot of Target but I did open them in the restaurant and guess what?????
THEY WERE NOT WIRELESS!!!!
So yeah, dumb mistake on my part but honestly, they were in the wireless headphone display place and the Target dude knew without doubt that I was talking about wireless. So. Sort of his fault too.

Therefore, after lunch, we went back to Target and dang if I didn't just get the same brand as the original pair I had which I loved until they fell apart.
Those I did test even before I left the store. They appear to be fabulous.
Or at least, functioning properly.
And I returned the JBL's to Best Buy and the Beats to Costco and please dear god, let this be the end of it all for a least a few months.

God this is all so boring. I'm sorry.

I'm having some anxiety today, the kind I haven't had in quite awhile but really, I'm okay, and I did have fun with my grands and my daughter although I had to give the kids the I really don't have much patience today speech again. They were just being kids and sometimes, even when they're really happy and making really loud happy noises in the back seat it can still make you crazy. But oh my goodness, my boys give me the best hugs, the sort of hugs that make you know you are loved to pieces. And Maggie.
Well.
That girl. 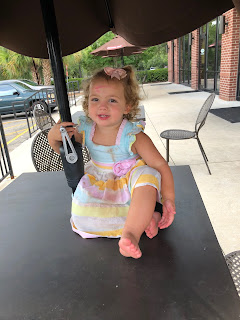 "What's that on her forehead?" I asked Lily when they got in the car.
"Permanent marker," she said.
"Well, I guess we'll see how permanent it is," I told her.
She can say all of her ABC's now. All of them. She's a little whiz and a wonder.

And so it's Friday. That means clean sheets and a martini. I've got the bed all made up fresh but the martini hasn't happened yet. Mr. Moon just got in and he's not quite ready for it.
He better get ready pretty fast is what I say.

The butterfly lilies are starting to bloom. 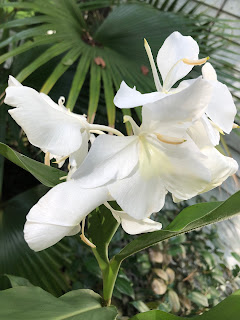 So are the crinum lilies which have never done much at all in their bed by the kitchen. I suppose this year's rain has been kind to them. Also, I throw a lot of kitchen scraps in that bed which means the chickens get in there and scratch around and clear out the weeds and leave their poop which is also a good thing for all of the plants. Whatever scraps they don't eat break down and that adds to the whole organic mess of the soil and I have beautiful worms out there. I swear. I do not know what I'd do if I had to live in an apartment somewhere and wasn't able to just throw my peelings and pits and other bits out the kitchen door. My coffee grounds go out there too. It's a beautiful thing. 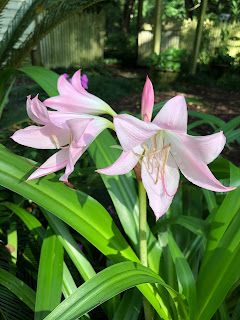 There's so much going on in TrumpLandia today that I can't even keep up with it.
Let's not talk about it, okay?
As I said, I'm anxious enough.

All right. I'm sending you moonbeams and rainbows or at least rainbows and lilies.

The fishermen caught their limit. More snapper in the freezer for me!
And Mr. Moon has made me a martini.