No Patience. No Peace Love And Understanding, Either 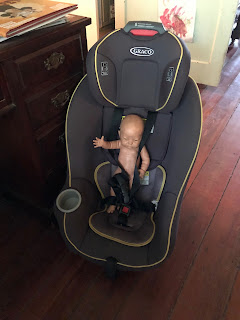 That is the only halfway decent picture I got today which didn't have a naked child in it.
Oh. Wait. That doll child is naked. But her modesty is preserved by the way Maggie put her in the car seat.
I do have one perfectly darling picture of Magnolia in which although she is naked, nothing really shows that a diaper would hide but I feel that's it's disrespectful to my grandchild to post it since she has no say in the matter so I won't but trust me- she is beautiful.

It's been a frustrating day with the continuing saga of the headphones and also with other technological blah-blah but I'm trying to keep it all in perspective and not get overly riled although I will tell you what did overly rile me today. I was in the parking lot of Costco, getting out of my car when an elderly man with a cane and a fucking bright red MAGA cap perched on his head approached me to brag about what great gas milage he gets in his Prius. I am currently driving a Prius too and when he asked me what my milage was, I told him I had no idea. Which I don't. But mostly I didn't want to talk to the self-entitled, smug-looking old man or his damn perky wife either who joined us to say that she, too, had a Prius. They had TWO Priuses! And now they're spending the money at Costco on what they've saved on gas! How cool!
And here's the part that's troubling- I not only did not want to talk to them, I sincerely wanted to punch the guy in the face and watch that evil piece of shit hat fall off his head and if he fell down after I punched him, that would have been fine too.
That's how far this whole thing has gone with me. And I am not a violent person. I have never punched anyone in my life. I've barely hit anyone in my life. But the image of me punching that guy would not leave me. I had no desire to engage him in any conversation to try and learn something about him and why he might be a Trump supporter. None.
Just the fact that he was bragging with that hat that he WAS a Trump supporter made me feel in my gut that not only did we have nothing in common, even if we both drive a Prius, but that everything I believe in is something he disdains and everything the hat that he was wearing symbolized to me is what I abhor.
No common ground.
Not one millimeter of common ground.
And that's scary as fucking hell because if I can feel this way, if I, the pacifist, hippie, tree-hugging grandmother, has an almost overwhelming urge to commit violence upon the elderly, then we've reached a point in our society that I never thought I'd see.

So I've been thinking about that a lot today and I don't feel good about it at all. I wasn't rude to the man or to his wife but disengaged conversation as quickly as possible and made my way into the store where I did not see them again.
Thank goodness.

While I was there I bought yet another headset because the one I bought yesterday sounded as if I was listening through tin cans and it kept dropping connection.
I probably could have adjusted to the sound eventually but the connection dropping was a deal-breaker. So I got a set of Beats today and their sound is fine and they seem to have excellent connection but they are earbuds without the over-ear loop thing and they will not stay in my ears and that is that. My ears are not made for earbuds.
Period. The end.
I tried all the different sizes that came with them and also the little wing-things that nestle up in your ear and it didn't matter; nothing worked.
So.

Tomorrow's to-do list: Return TWO sets of wireless earphones.
Earbuds. Whatever.
Part of the problem is that I was so very, very happy with the first set I bought. The sound was good, the little things stayed in my ears with the over-the-ear loop, the controls were easy, the battery lasted for eight hours, the strap that held them together was soft and just the right length, and I loved the voice that told me, "Power on. Headset connected. Listening time, eight hours."
She was so pleasant.
But. They fucking fell apart after three months use and the second pair I bought came out of the box with one defective side. This is not good quality.
But I'm thinking I'm going to just go for another pair of them anyway.

This is all so ridiculous.

So Owen and Gibson and Maggie came over this afternoon and I set aside my stupid silly problems for awhile and although we didn't do much, it was pleasant. I will admit that I didn't have much patience and did actually yell at Gibson once when he and Maggie were in the bathtub (recreational water play) and he splashed me and I asked him not to splash me again and then he splashed me again immediately.
I apologized. And told all the kids that they needed to be nice to me today because I didn't have much patience. I've so rarely raised my voice to them that they were probably shocked but they need to remember that I'm human too, I guess.

Owen was sweet and let me show him some sixty-four year old Rolling Stones videos on the TV Youtube and a video from a concert of theirs last month, too.
"How does he make his legs do that?" he asked when he saw a young Mick doing the crazy-leg that he no doubt stole from James Brown. He was impressed while watching the new video that they were still doing it and still looking pretty good, especially when I told him that Mick Jagger was a great-grandfather and that he also has a two-year old child.
As well he should be.
But he was most impressed when I figured out (with Boppy's help via telephone) how to activate the Wii.
To be honest, I was pretty impressed with myself too.

So that's that. Maggie ate four Popsicles because she figured out how to get them herself out of the freezer and did so every time my back was turned. She played with her babies and with other toys and made me some macaroni which again involved a Fisher Price truck in a saucepan. She and I also had a nice time on the porch swing, swinging back and forth and making a little breeze which ruffled her curls, and singing songs together.

It wasn't my best afternoon as a grandmother but I tried. And I gave them good snacks, the Popsicles included which were, in fact, organic sorbet on a stick so good for me. And good for them.

Mr. Moon is going to go fishing again tomorrow and guess what I'll be doing?
Yeah. Going back to Best Buy. And Costco.
But I tell you what- I'm going to be trying any new headset I buy in the parking lot before I leave so that if there's any major problem, I can just turn right around and go back to Customer Service.
I'm old and have no shame and I've run out of patience, obviously. I'm not so old that I couldn't have punched that old man in the face.
What in hell is wrong with me?
What in hell is wrong with our country?

Again- I do not know.
I don't know shit.