I Did Read The Declaration Of Independence Today. I Wish Everyone Would

Well, here's the big news from Lloyd on July 4, 2018- I have decided to rename Hawkeye. His name henceforth shall be Ringo. Since he's definitely a rooster he must have a rock star name and Ringo seems to fit him in that his feathers are so fine and fancy and shiny and iridescent like the jeweled rings of a drummer, flashing in the stage lights.
So. There you go.
Ringo.
If there had been any doubt that Ringo was a rooster Mr. Moon saw proof of it the other day when he spied the bird chasing after Viv/Vera to try and jump on her. This means several things. One, that yes, he's a rooster. Two, the hens are maturing to the point where a maturing rooster has an interest which leads to three- it shouldn't be too, too long before we start getting eggs.
I still haven't heard the little jungle guy crow. I did hear someone crowing in that broken-voiced, teenaged way that young roosters have a while back and I guess it might have been (must have been?) him but I sure haven't heard anything since. It's not unusual for a young male to keep his crows to a minimum when there's an alpha rooster already in place but from what I've observed, they sometimes just can't help crowing.
Of course Ringo is a jungle fowl and I've read that they are not really chickens at all but actually pheasants and do they even crow?
Well, I just checked and Wikipedia says they do, but it's a shorter crow than that of the more domestic birds.
I'm so glad I got those crazy things. It's going to be so much fun when I see what sort of eggs they lay. I wonder if they'll be broody hens and want to sit on eggs next spring.
Oh, chickens! How I love you! 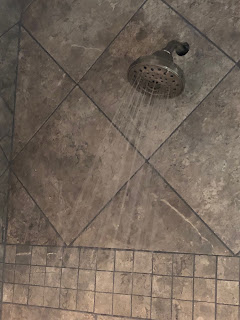 Can you see what that is? It's the shower head in Mr. Moon's bathroom! He just took the first shower in it. It's not entirely finished, either the shower or the rest of the bathroom, but it has running water now. I asked him how it was and he said, "Anticlimactic. It was just a shower."
I'm not sure if he expected angel trumpets to sound or a rain forest downpour or what, but still-running water! Hot and cold! In a bathroom he's built!
I think that's pretty cool.

And we're waiting for August and Levon to bring their parents out to see us.
I hope August still remember us.
I've made a squash casserole, a quinoa and bean salad, and have cut up mangoes, peaches, strawberries and blueberries and blackberries to put on top of an angel food cake I bought at Publix.
Yes. I bought it. I didn't have enough eggs to make my own.
So there.

I hope you've had a lovely Fourth. I don't even know what to say about this, the most patriotic of American holidays in these treacherous and terrifying times. Since I no more have the patriotic gene than I do the religious gene, it's never been a big holiday for me anyway but shit.
This year has reached a special depth of non-celebratory feeling.
I'm sure someone will start shooting off firecrackers around here soon enough so I guess I'll go put on my stars and stripes bikini and crack a cold one and get the grill going to cook some All American hamburgers and hot dogs.
And then I'll just watch this until I'm in a frenzied stupor of patriotic emotion.