Bits And Pieces And More Grandchildren 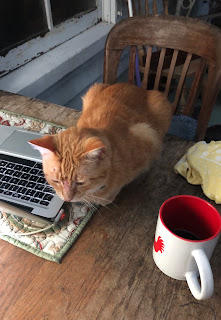 Maurice has been so conflicted since we got home. She shows us that she wants love, love, all-you-need-is-love but then she grabs and bites us or simply scratches us as we walk by her, reaching out with her claws to bring us closer so that we'll either pet her or she can take our hands off to bloody stumps.
She's so confused.
She was born under a bad sign, I do believe.
Possibly the sign that says, "Only Household Garbage" down at the dump.
But you know I love her. She knows it too but she just can't feel it all the way to her heart. We all know how that goes.

Anyway, my Lily's kids came over today so that Lily could go get that crown and then have a grown-up peaceful lunch with her brother. The children and I had a pretty exciting and wild time of it. I made them another treasure hunt with clues that led them through the house to the record player where a pack of snack crackers was stashed. We also read some books in order to cross a few more squares off their summer reading list. One of the books was "a joke or riddle book" and so we read Bennet Cerf's Book Of Laughs which is very outdated and only mildly funny but the pictures are great. 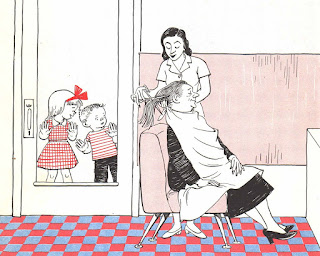 In this particular joke, the little girl is telling the little boy that her grandmother is getting her hair cut so that she won't look like an old lady anymore. The next picture shows her with short hair and the little boy says, "You're right! Now she looks like an old man!"
Which she does.
Deep belly laughs.
Owen, however, finally got the way it works.
"Marvin is so literal," he said. He was right. We agreed that it was like the little boy was Amelia Bedelia's child.

When lunch time rolled around, I made them a menu. 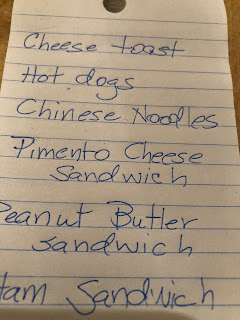 Tortilla chips and a choice of juice came with each entree.
I got two orders for hot dogs and one order for cheese toast. 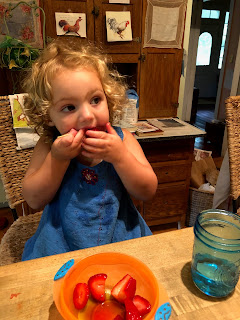 I swear, this child just keeps getting prettier and prettier. And sassy? Oh yeah. Sweet? Sweeter than any ripe summer berry you ever tasted.
Her brothers wanted to play Wii. I let them. It was raining outside so why not? 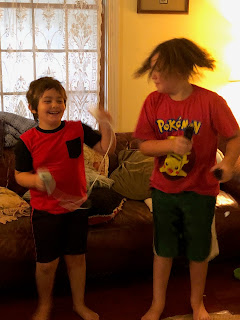 Look at that hair! They were tandem bike racing and roaring with laughter.

So that went very well and then I had to go to Publix and somehow in the midst of all of this I've managed to do three loads of laundry including one load of sheets and pillowcases and have made up the bed (Maggie helped) and also fooled around with my new hobby which is trying to clean out the ten dollar Krups espresso maker I bought at the Methodist thrift store in Roseland. 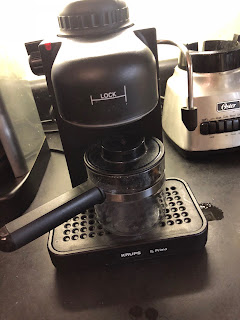 It was exactly what I've been looking for and I could not believe my good fortune but I neglected to inspect it very carefully before I bought it and when I unscrewed the top where you put the water in I realized that someone who had no clue had poured milk through it, misunderstanding the purpose of the machine, I guess. The instruction manual came with the thing which just goes to show that we don't read instruction manuals and sometimes we should.
So I've been running vinegar and water through it for three days now, pretty much constantly, and I think we're about there with it. At least everything seems unclogged and working and I'm getting very little residue now.

What an exciting life I lead!

One more thing. I just finished listening to an audio version of this book. 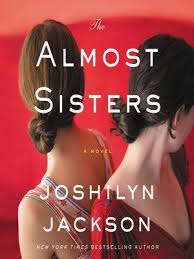 Joshilyn Jackson is honestly a fine writer even though I am sure that her books are described as Southern Chick Lit. This book dealt with a whole lot of issues with a great deal of insight and thought and sensitivity and it avoided stereotypes even as it explored many of the behaviors which do engender those stereotypes. It ain't Great Literature but it's not bad at all and it's very easy to read and it's not exactly what you'd expect and I really enjoyed it. The audio version was splendid. Ms. Jackson narrated it herself and she has wonderful reading voice and when you hear it read by the author, you damn well know you're getting all of the correct inflections of meaning.
Which is cool.

That's it, I guess. Let's see what happens tomorrow.
Good Lord willing and the creek don't rise, I'll be here.
You too, I hope.