How Tuesday Has Gone 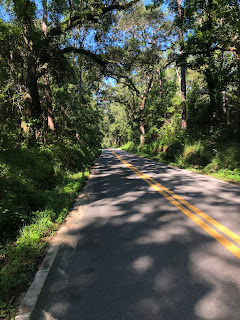 I got back on my walking path today and it actually felt really, really good. I felt strong and did not once feel as if I was dying even though it was as hot and humid as ever. Maybe the extended break I've taken along with all of the high-density fried foods I ate the last few days just provided the fuel I needed!
Haha! 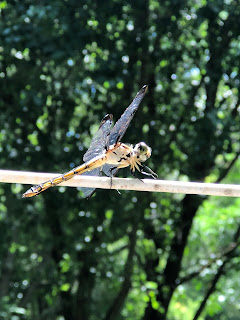 I took that picture when I was hanging out the clothes. Dragonflies love to perch on the clothesline and the clothespins, too. Aren't they the most magical creatures? And they don't bite or sting which makes me love them even more.

Lily brought her kids over here this afternoon for me to watch. They needed a change of scenery for sure. The boys had been so devilish that she'd made them stay outside for half an hour to play and they, thinking they would show her, refused to do anything but sit. Of course Lily didn't care what they did as long as they weren't hurting themselves or each other or driving her crazy. But because of their attitude, she told them they had to stay outside another half hour. By the time they got here the story was that they'd been forced to withstand the intolerable heat for two hours and boy, were they glad to get in the air conditioning!
This is what they immediately did. 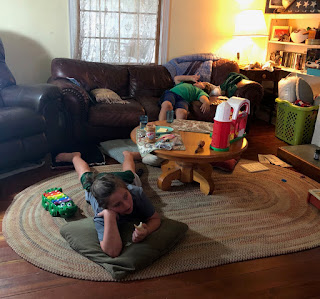 Well, maybe not immediately because Maggie had already gotten out a few toys to play with but it wasn't long. There were snacks, of course. Apples, peanut butter, Mer's homemade bread. Maggie wanted to do the alphabet puzzle again and so we did but Gibson helped. Those boys are so sweet with their sister. Always. They never lose patience with her. And honestly, she's so good when she's here. And she lets me kiss her and kisses me back which is good because honestly, I just can't help myself. 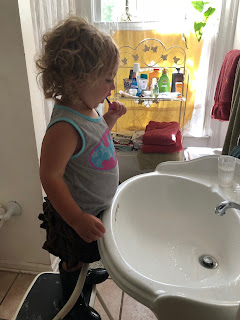 She's so freaking cute. She loves to brush her teeth here. Don't ask me why.
She went and got my old Zippy and put him to bed in my bed and then crawled up beside him and wanted me to help her get the covers "over my arms." So I did. And she smiled like an angel and closed her eyes and pretended to sleep. When she woke up she patted the bed beside her and said, "You lay here," and of course I laid down beside her and helped her cover up again and we pretended to sleep some more.
This never gets old, does it?

Gibson wanted to do something he hasn't done in forever which was to play beach with a bowl of water and the little plastic mermaids and monkeys that are supposed to hang onto the sides of fancy cocktail glasses. I really need to order some more from somewhere. I'm down to about three of each. 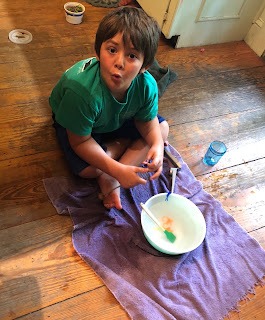 He wanted ice in the water because mermaids like cold water. And as soon as I got it all set up, the boy started doing what he does best which is to make up situations and narrate fanciful pretendings involving whatever it is he's playing with. I've seen him do it with salt and pepper shakers at a restaurant. And that boy is so sweet, too. He wanted me to read him one of his favorite books which is "In Search For The Zipperumpazoo" which we both love so much. And he's a cuddler if there ever was one.

And Owen? He wanted me to make a treasure hunt for him. I had to hide a shell and then make up clues which he could follow from one place to another until he found it. Which I did. And which he did.

So it was a good afternoon. When Jason got here I had just gotten Magnolia's clothes back on her. She had taken them all off earlier and when I told her she needed to put them on because she couldn't go home naked she asked, "Why?"
I thought about it.
"Oh honey. I don't know."

She accepted that and got dressed and she was so glad to see her daddy.
"You been at work?" she asked him.
"Yes. I've been at work."
And then off they all went and I tidied up. 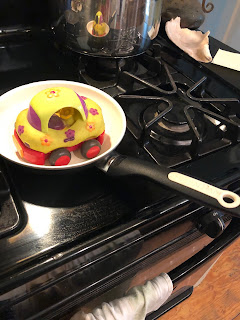 You never know what you'll find when they leave.

I guess I better go make some supper. That car isn't going to saute itself.