The Traditional Bad Santa Post With Pictures And Gift Suggestions 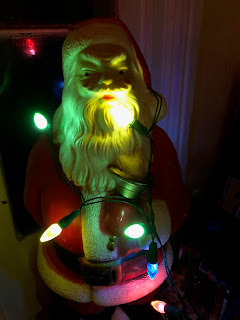 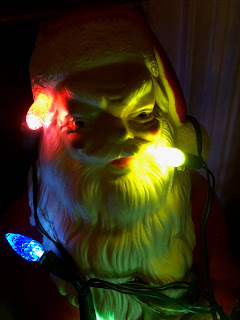 Well, guys- there he is! It's the Ms. Moon traditional BAD ASS Santa, aka Evil Santa, aka, What-the-fuck-were-they-thinking?
Yes, I let him out of the closet today in order to complete my holiday decorating.
Lily and her kids came over for pancakes this morning and Owen set up the Nativity for me. He arranged the angels and Mary and Joseph and the donkey and the cow and I said, "Whoa! You forgot someone, buddy!" and I went off to the library to fetch the missing figure from the mantel where he lives when he's not being part of the cozy little scene in Bethlehem. 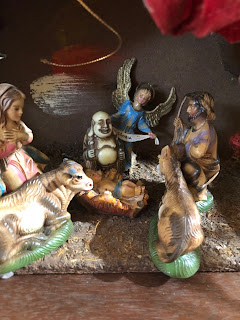 We do so try to be inclusive here at the Church of the Batshit Crazy.

Here's what the whole little tableau looked like after I got a few magnolia branches to fully create that perfect seasonal touch. 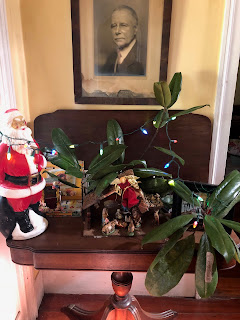 Don't you think that the picture of my great grandfather adds just the right amount of solemnity, dignity, and merriment?
I do.

Thank you, Owen, for helping me to make the holiday magic!
Here's what the magic boy looked like eating pancakes. 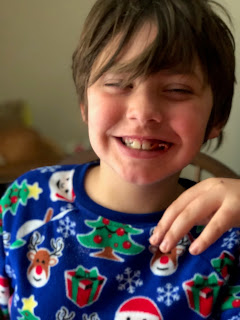 For some reason, he likes to eat pancakes like an uncivilized beast. He doesn't use butter or syrup on them so that he can eat them with his hands and not get them all nasty. So...a rather fussy uncivilized beast. He's growing his hair out. And do you see that cleft in his chin? Just like Levon's.
Speaking of that family, I got a picture from Jessie today and this is what they're doing in North Carolina. 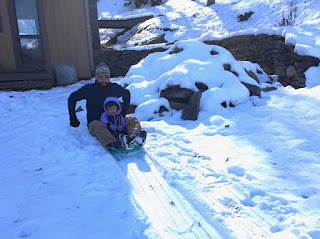 Say what? It got up to 70 degrees here today. We're going to have to take August to the beach when he gets back so he can thaw out. Seriously, I bet he is loving it all.

And here is Ms. Maggie June, doing what Maggie June does best which is being crazy cute. 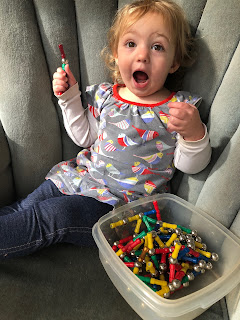 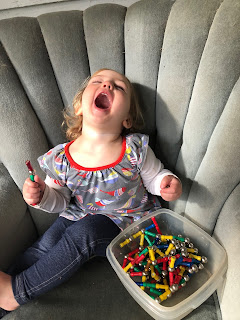 I believe she had just heard one of the roosters crow.
Our family can be a bit dramatic. I admit it.
While they were here, I put a CD of Keith Richards' Crosseyed Heart on and Maggie was standing right there with me when the music started. She was enchanted.
"Can you hear Keith?" I asked her. "He's playing for you."
She waved at the player and in her best Southern accented voice said, "Hey!" I swear that she can put as many syllables into that word as a Miss Georgia Peach and I feel quite certain that she totally believed that a tiny man was playing in that box with the lights and dials and buttons on it.

And I did not get one picture of Gibson what wasn't blurred. So. Sorry, Gibson.

And here's one more picture of Owen, pretending to take a nap with his mother who had to work all day yesterday. For some reason, every time any part of my family gathers over here, people end up in my bed. 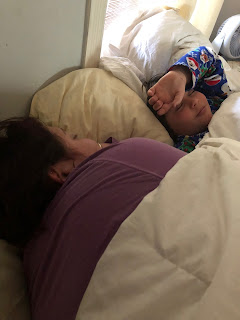 Probably because it's the coziest bed in the world. It's Snuggle Central. I love that.

After they all left, I messed around and cleaned up the kitchen and swept a few floors and texted with a friend and did one load of laundry and finally got around to cutting out the dress I want to make for Maggie. And that is all I did today.
Besides chasing off a huge hawk who was trying to snatch a chicken. The roosters make a big racket when a hawk is around. Not only mine, but the roosters next door.
Predator birds are so cruelly beautiful, aren't they? This one must have had a wing span of three feet and his talons were immense. He'll be back. There is no doubt of that.

I am panicking a little bit. I mean, tomorrow is Keith Richard's birthday, which is a good thing, but it is also one week from Christmas and I am completely unprepared. So yes, of course I spent the weekend embroidering and yardworking and starting a new dress for Maggie. Every now and then it would occur to me that perhaps I should do some shopping. Like, put on real clothes, get in the car, drive to town and go to stores.
Well, the mere thought of such foolishness gave me the vapors and led me to thinking about washing down a few Ativan with a slug of vodka and when I feel like that, I choose to consider it to be a sign from god that I should not in any way participate in whatever was causing me to have those thoughts.
However, I suppose there will be no getting around it tomorrow.
I used to have a friend who came to see me once on Christmas Eve day. She told me that when she left my house she was going to go do all of her Christmas shopping.
"Where?" I asked her, as it was getting late.
"Oh, Walgreens," she said airily. "Is that wrong?"

No. It was not wrong. There are many, many fun and useful items at Walgreens which anyone would appreciate getting for Christmas. Who doesn't need a new digital thermometer? A knee or wrist brace? This season's palette of Maybelline eyeshadow? A one pound bag of snack-sized Almond Joys? A bottle of Eau de Almost-Smells-Like Chanel Number Five? Lightbulbs? A puppy calendar? A box of assorted-size Band-Aids? A huge bottle of Vitamin C? And nothing says I love you and am celebrating the birth of Jesus Christ Our Lord with you like incontinence products. Am I right?
Hell, they sell wine and clothing and Inspirational Christmas music at Walgreens! I imagine you could even get gift certificates for flu shots!
You think I kid.
Sigh.
I do not.

I have survived sixty-three Christmases in my lifetime and I will probably survive this one too.

What's the best Christmas present you ever got? I'd love to know. Share the joy, people.
After all, it's the most wonderful time of the year!