Jessie and Vergil and the boys got home last night and so you KNOW what I did this morning. I needed to run by Publix again anyway and so a trip to town was completely necessary and my little car made its way straight to the house where August and Levon were simply sitting, twiddling their thumbs, waiting to see their MerMer.
Well.
Sort of.
Not really.
When I got there, August was naked as the day he was born and his daddy was trying to get him to hold still long enough to get his clothes on and after I greeted them and got some hugs, I went in to where Levon was also getting dressed and I talked to him as he lay on his changing table and he smiled at me and all was well.
"Can I have him?" I asked Jessie and grabbed him up before she'd even said yes.
Oh, that perfect weight of a baby on the shoulder! There is nothing in the world like it.
Then August found me and he was dressed in human clothes and he took my arm and said, "Come," and so I did. We went into his room and his daddy started putting stars that will light up at night on the ceiling above August's bed. He held August way up high and let him stick a few stars to the ceiling too.
After about half a dozen, Vergil decided that it would be a good bedtime ritual to put one new star up every night and that is what they are going to do.
Levon and August and I sat in the rocking chair and August got me books and we read. He is now reciting the books as you read, excited as he can be that he knows the words. I, too, was impressed.
I was so happy to sit there and hold one brother and read to the other.
We did this for awhile and then Levon started fussing and acting as if he hadn't eaten in about ten minutes, which his mother informed me was about the truth. So I handed the boy over to her, and August and I read some more books and then did a puzzle thing and then it was snack time and there was hummus and pita chips and pistachio nuts which August has a great fondness for and I got to hold Levon again, his tummy full and he being content.
I could have stayed all day but that would have been rude and I knew I had things to do at home so I made my thirty-minute good-byes. It is such a difficult thing to leave them.
Here are those boys. 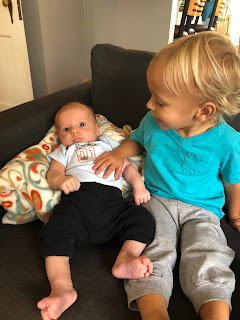 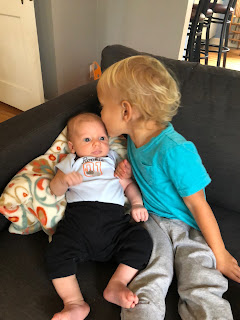 I did go to Publix and when I got home I did one of the things I dislike the most which is to wrap presents but by god, I wrapped them all! Every one! And they are relatively tidy!
I say relatively.
Instead of looking like a two-year old wrapped them, they look like perhaps an eight-year old wrapped them which is a vast improvement.
I did not, however use bows or ribbon.
Please.
So that is done and I am cooking the chicken for the chicken salad and it is night and it's one of those days where my heart feels as tender and as sore as it can be and everything I think about makes me cry. I cry about how much I love my family. I cry for the missing of the father I never had but whom, as a child I always thought would magically appear on Christmas but who never, ever did. I cry for feeling as if I am not nearly as good a wife or a mother or a grandmother as I should be. I cry for all of the things I have not nor ever will accomplish in my life. I cry for everyone who is hungry or cold or who hurts whether in mansions or in the streets. I cry for our planet, our country, for the dreams of what could be and those who would stifle those dreams for the sake of their greed and their inability to see or care about the suffering they are causing. I cry for beauty and I cry for sorrow. I cry for having to try to explain racism to an eight-year old. I cry for the finality of death and I cry for the absolute limitless possibility of birth. I cry for those I can no longer dance with as they are not here any more. I cry for the memories of the dancing we did together. I cry for a world where Beethoven could exist as well as Hitler. I cry for the many times I have failed and I cry for the fact that I have tried with open heart and mind.

Let's all just try to love one another without bullshit or reservation.
Let's try.