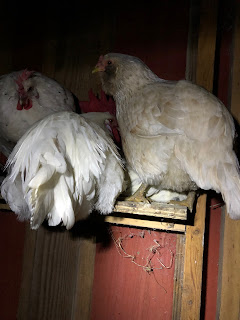 When we go to shut the chickens in at night, we always do a head count. I am not sure exactly why because if one is missing, well, it's missing. But that's what we do.
Right now we have ten chickens. Seven hens and three goddam roosters.
I say "goddam" because those roosters are making life hell for the hens and I think that's why we're not finding eggs and now that Pearl has reached sexual maturity, my ladies' lives pretty much consist of trying not to be mounted. And the roosters' lives pretty much consist of making sure no other rooster gets his ladies so there's a lot of fucking and a lot of the knocking of one mating rooster off a hen by another rooster.
I swear- I'm ready to turn Pearl into chicken and dumplings. This may sound cruel but what's going on now is cruel to the hens and not fair at all. Honey and Nicey spend most of the day in the hen house, hiding from the men birds. When I went out to clean it today, Nicey refused to leave it, just moving from one nest box to another as I took out the hay, scraped up any poop, and put in fresh hay.
And no one wants another rooster. That's just the truth. My beautiful rooster Dearie got the message a long time ago and moved next door where there are many, many hens but even there, he does not invade the space of the primary rooster. He hangs out in the goat pen mainly.
I wish that Pearl would start acting mean so that I had a better excuse to do away with him but so far he's only mean to the sister-wives.
Chicken society is as strange and complex as human society in my opinion. Mick and Joe Cocker seem to have worked things out between them fairly well. That's Joe's butt up there in that picture and Dottie is to the left of him and Camellia is to the right of him and Darla is underneath him. That's four chickens on a ledge that was never meant to hold one. Meanwhile, there are empty nest boxes with fresh hay in them which are enclosed on three sides. Pearl is in one by himself, Mick and Lucy are where they always sleep which is in three open boxes. Honey and Dearie are in a nest box and tiny little Violet is sleeping where she's been roosting for quite awhile now which is on a tiny perch above the nest boxes.
Ten chickens.
Each with his or her own personality and quirks and favorite place to sleep.
And I'm lucky these days if I get two eggs a day.
Meanwhile, they get regular laying feed, corn scratch, and kitchen scraps, not to mention begonias and whatever they scratch up during the day. They eat better than a lot of humans do.
They definitely eat better than my cats do.

Anyway, that's enough about chickens. It's getting cold again tonight with another freeze expected. It's so chilly that Maurice came and sat on my lap while I was embroidering and did not bite me. I was almost flattered but then I realized that she only wanted my warmth. Still, it was nice.
I will take whatever affection is offered me with grateful grace. Especially if I am not bitten in the process.