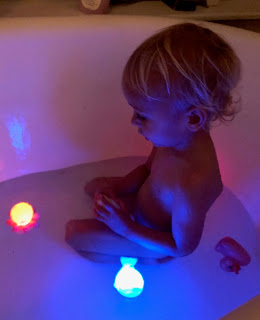 That was August in last night's disco bath. I love those light up bath toys. It's a little bit of magic, in my opinion. August is the best bath-getter. He does not mind having water in his eyes at all so washing his hair is a joy. After his bath when I had him all dry and in his clean, snuggy pajamas, I read him some books and I could not stop sniffing his lavender smelling head.

We've had a big day. Levon looks different every morning. I swear. Here he was this morning, swaddled and resting from his night's work of nursing. 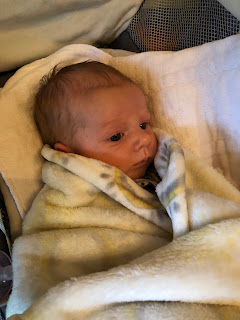 He is just a darling little thing and will look right at you when you talk to him and he smiles sometimes when you sing to him. I got to take a little nap with him today, cuddled up on my bed and it was, of course, heaven.

Here's August in his new overalls and his binoculars. He's an explorer. 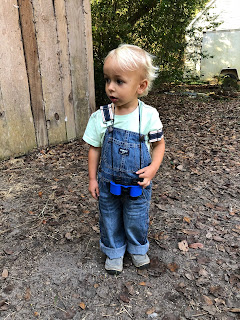 Lily and Maggie came over and before they got here, I'd showed August a short video that I'd made of Magnolia playing with her dollies and as soon as they got in the house, August ran to get the dolls and he handed one to his cousin and said, "Here, Maggie!" He's a thoughtful boy. He also likes to boss Maggie around and she is not having it. She found a bar of homemade soap in a plastic bag in a basket I keep on a shelf in the bathroom and she wanted me to open the bag. I said, "Maggie, that's soap. You don't need any soap now," and August, holding his doll, pointed to the basket and said, "Maggie, put it here." She ignored him like he wasn't even on the same planet.
Then I said, "Okay, do you guys want to smell the soap?"
They did and so I opened the bag and let them smell it and they made appropriate sniffing noises and then went off to do something else.

We finally got ourselves together here (preparing to take two toddlers and a newborn out is more complicated than you can ever imagine before you have children) and drove to Monticello where of course we went to Wag The Dog, the humane society thrift store.
For some reason I could not pull myself away from the children's books and I found a whole bunch of old Babar books which I bought. 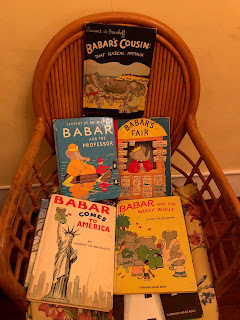 And these aren't even all of them! 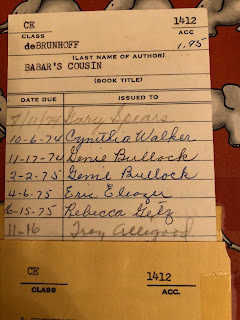 And look what's in the back of each of them. They came from the library at a local Baptist Church. For some reason, this delights me beyond reason.

After we paid for our purchases, we went over to the Rev Cafe and had delicious lunches. 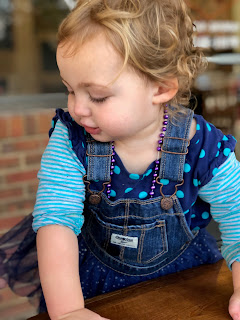 I ordered Maggie overalls too, but hers aren't pants. They have the regular top but a beautiful, spangled blue tulle tutu skirt. 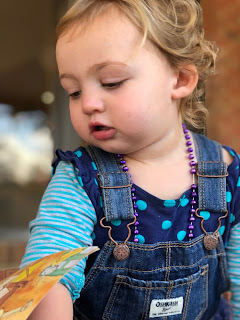 She was quite the fashion plate and while we were eating on the outside patio, she went from table to table saying, "Hey! Hey!" just spreading her charm and love with all.

Here's what the boys and their mama looked like tonight as I made egg rolls. 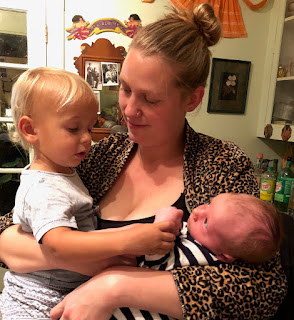 We are having such a good time and it's so nice that they've been able to spend these days with us. I've always been suspicious of the saying that it's not the quantity of time you spend with children but the quality because you cannot just decree that any moment will be quality time. You have to have hours and sometimes days to get to those moments of magic and connection and sweetness.
And we have. I've gotten to not only bond more with August and with Levon, but with my grown daughter who is now the mother of two. And it's beautiful.
And I could not be more grateful.