Betty And Wilma Hit The Shops 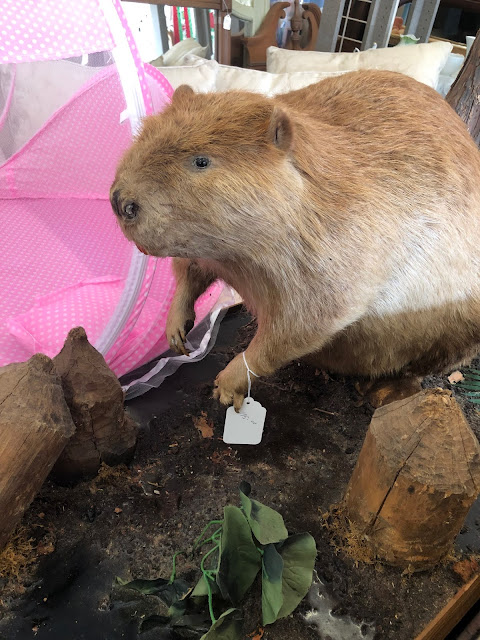 Lis and I had the most lovely time in Monticello today. It was mostly uneventful in the way one would imagine a leisurely stroll through antique and thrift stores to be except for one incident which occurred that was absolutely an event.
More on that later.
We stopped in first at Wag the Dog, the thrift store for the local animal shelter. It seemed to me that things have gone up in price there but it's still a reasonable place to shop and one never, ever knows what one will come across. That fine beaver in the picture above, for instance, is part of an entire diorama involving dirt, fake plants, a long wooden platform, and an otter. It's the sort of thing that I absolutely and shamefully adore but I did not buy it. And mostly I don't regret that decision. But wouldn't the grandchildren love it?
I think so.

After Wag we went into a new store in town (or new-ish) in an old building that someone has put a ton of work and money into. They had some very nice things in that store and the prices were not bad. Still, we bought nothing. My favorite part of that whole experience was going upstairs to see more things and wandering into some rooms that have not yet been redone. I found them eerily beautiful, even though they'd been tagged and worked over by graffiti artists when the building was standing vacant, I guess. I took a few photos. 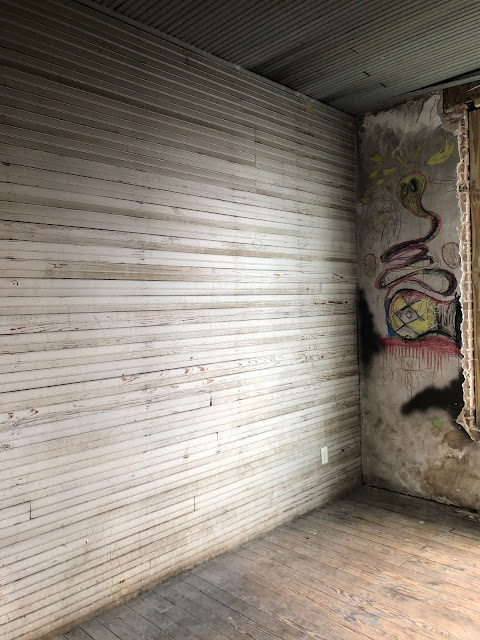 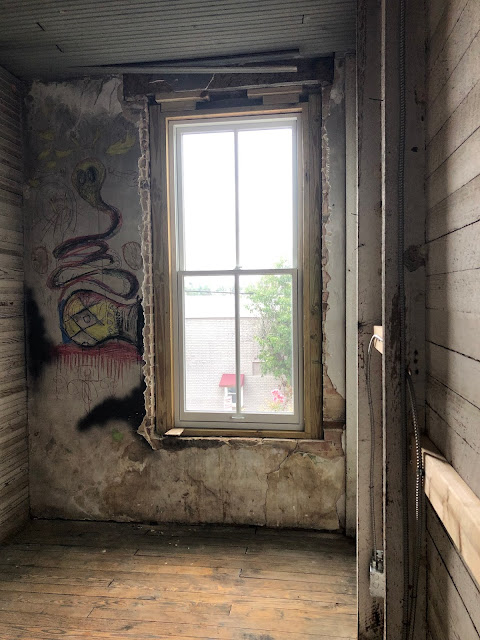 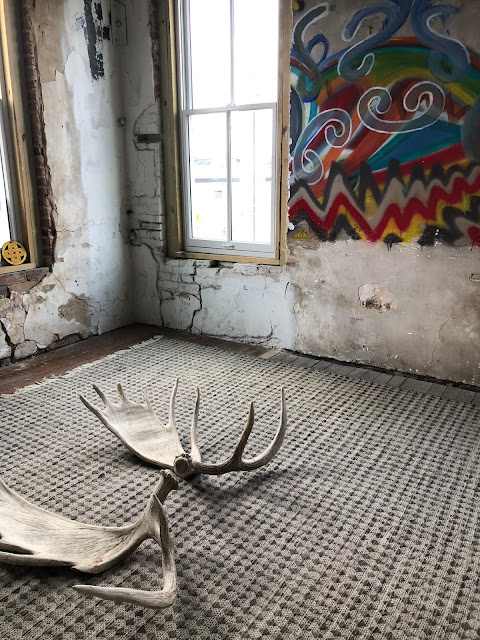 And then this door. 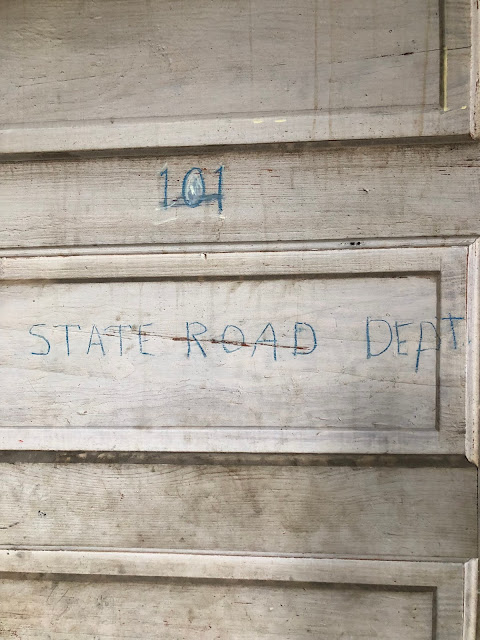 I have a feeling that it may indeed have once stood in the doorway of a local office of the State Road Department.
I did find something at that store that I would love to own. 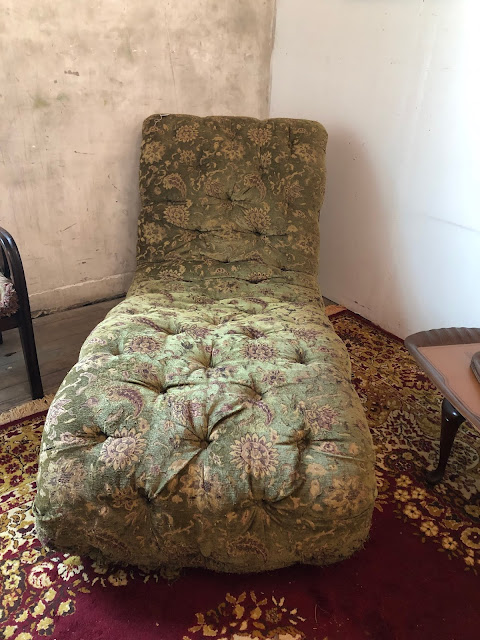 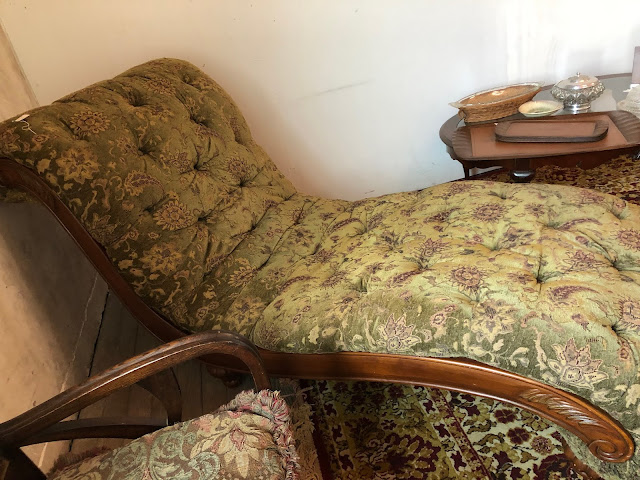 I think that if we took the bouncing horse out of the library the chaise lounge would fit in beautifully. And truthfully- the grandchildren have almost all outgrown the horse.
I'm just pondering. I showed the pictures to Mr. Moon and he did not immediately jump for joy and shout, "Hallelujah! We must buy it!" which is what I had rather hoped his reaction would be.
Although I knew it would not.
Instead, he said, "That's nice." And proceeded to look through the mail.
Ah well.
By this time in our shopping we were ready for lunch so we walked over to the Rev where I have enjoyed so many lunches with Lily and Jessie and the children after our outings to the library for Toddler Story Hour. You know- those outings were absolutely some of the sweetest times of my life. Mr. Terez and Ms. Courtney, the stories, the activities, the other little children. How I miss them!
But going to the Rev is still fun and we sat outside and even though the temperature was in the high nineties, it was breezy and quite comfortable with a ceiling fan overhead. Also the server brought us fresh glasses of delicious iced tea full of their excellent ice when our glasses were running low. So we sat and talked and laughed and looked at the traffic going by and at the County Court House which is such a beauty. 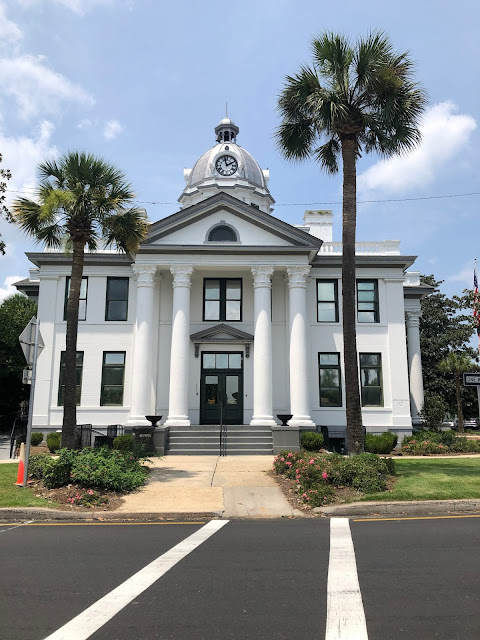 The building is surrounded by a round-about which people usually seem to navigate without too much difficulty but suddenly, as we sat sipping our tea and waiting for our lunches, we heard a huge bang, looked up, and saw a car which had obviously just run head-on into something. We watched incredulously as the impact caused the rear of the vehicle to rise into the air and then slam down again with another bang.
You know, it takes a minute for things like that to register.
No. I did not run over to the scene to offer assistance. We watched as people stopped and got out of their cars and before five minutes had elapsed, the police were there and then the fire truck and ambulance. We never saw anyone get stretchered onto the ambulance and we assume that there were no mortal injuries. Before we'd finished our lunch a tow truck had come to pull the car away.
So THAT was the incident which had been an event. As we drove by the site later we saw that the car had driven over a grass median and straight into the curb and steps leading up to the courthouse yard. We could only imagine that someone had blacked out for a moment but who knows?
We ate our delicious lunches and then we got in Lis's car and we drove around Monticello for awhile, exploring the neighborhoods. There are some absolutely beautiful old homes there. We discovered an old cemetery which I had no idea was there and we put walking around in it on our to-do list for winter. Even the thought of walking about outside today was enough to give us both the vapors.
So did we buy anything?
You know, it's funny. Lis and I used to be, if not magpies, then definite acquirers of things we admired. We each have different things that we fall for- Lis adores china, I am a bowl lover. And we saw some beautiful things today. But we're both at the point in our lives where we really just feel the need to get rid of things, not get more of them. We saw a few things that once upon a time we would have bought without a doubt. But today...well, we just did not.
We did both buy one thing.
Cotton yarn. 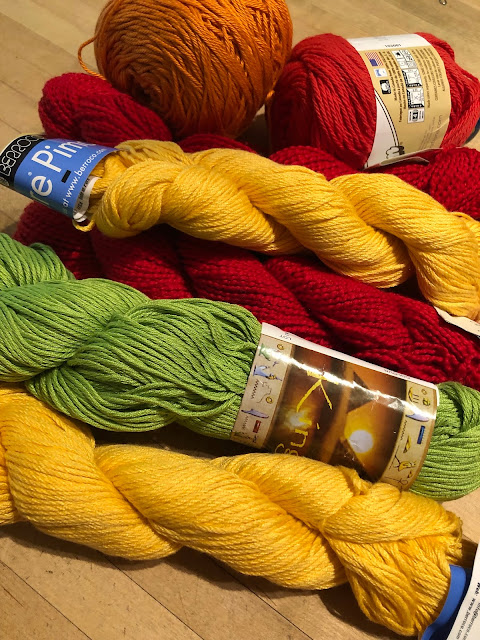 Wag the Dog had a huge bin full of beautiful skeins. Organic cotton yarn, regular cotton yarn, Pima cotton yarn. Most of it still within its labeled wrapper bindings.
I wish I'd bought more. I may well go back soon and do that. I mean- if you're going to buy things you don't really know what you'll do with, at least get the good stuff.
As we were leaving the Rev, I told Lis, "I can't believe all we bought today was yarn," and a man and woman were passing by. The man said, "That's the best quote I've heard all day."
"Feel free to use it," I said.
And Lis and I giggled like Betty Rubble and Wilma Flintstone and went on about our adventures.
What a very fine day.
Love...Ms. Moon
Posted by Ms. Moon at 6:40 PM