A Day In Short Paragraphs And Small Jars 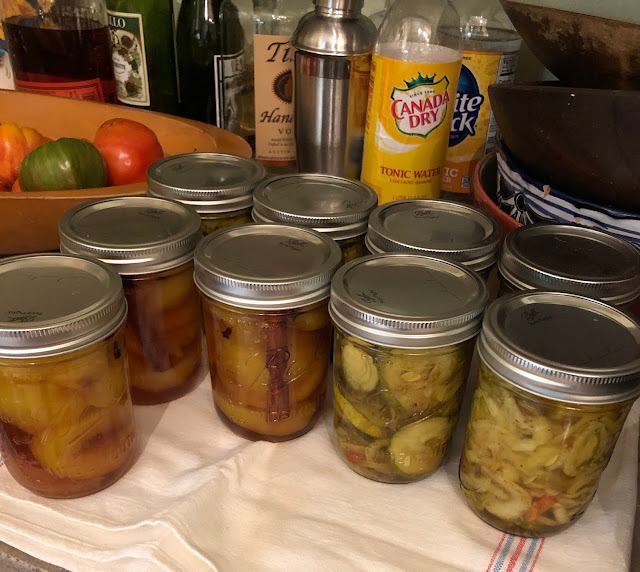 Started out this morning with such joy and high hopes. I was going to get so much done! My cucumbers and onions and peppers had been in the refrigerator all night with salt and a weighted plate on them and all I had to do was drain them, rinse them, drain again, wash canning jars, sterilize canning jars and lids, make the magical pickling concoction with vinegar and water and sugar and spices, pack the jars with all of that, and put them in a water bath!

And it sort of was. Honestly.

I made six pints of pickles. Not bad.

Clean up the kitchen to begin afresh.

Then on to the peaches which I tried to do the blanch-and-peel thing on but they were really not ripe enough for that to work so I ended up knife-peeling and pitting four pounds of peaches, then making the syrup (and it is a syrup- one cup of vinegar, one cup of water, four cups of sugar), then boiling the peaches in the syrup with spices. Again- jars and lids and bands were sterilized.
Now. Let me tell you what happens when you let syrup boil over on the stove.
You don't want to know. You can imagine. Stove top and some of the floor covered with a nice candy coating. So there was a bit of clean-up involved there and while I was at it, why not scrub the oven door and window clean? Right?
Sure.

Peaches all finally in their jars and in the water bath and they came out looking pretty.
All three pints.
Three.

Oh well. So what you see above represents my day.

I had thought I'd make peach preserves and/or some dill pickles today but that didn't happen. I'm going to give the peaches another day or so to try the preserves. And I want to make a cobbler in there somewhere.

Now it's time to make supper. I've already got some pretty little field peas simmering and I'm going to make some okra and tomatoes and a small cornbread and cook a little fish.
Literally- it's a small fish. I don't even know what it is. It came from the Gulf of Mexico. My husband caught it and cleaned it. It'll be great.

It's raining. The frogs are singing.

My legs are tired.

I had to rearrange the pantry today to try and fit more jars of food in. I guess that the seemingly small amounts of food I'm canning on a day-to-day basis do add up. Lily's having the same problem. We're both insane.

On another note, we woke up this morning with both Jack and Maurice in the bed with us. Both cats in the same bed. I thought perhaps it was the end times.
If it comes to pass that one day I do wake up and it is the end times, I'll at least have a full pantry.