Saturday Night And All Is Quite Well

Fall has been flirting with us for a few weeks now and today I think she may have actually hooked her fingertips into the elastic of her panties and is getting ready to slip them off. Or least let her bra straps drift downwards. We have a little bit more of a true idea what she's been offering.

I've worked almost all afternoon in the garden and whenever the sun went behind clouds, the chickens joined me to happily peck at bugs and seeds. Today I learned for the first time that chickens really do not like to scratch in direct sunlight, a fact which only makes me believe more in their intelligence. We got one fast hard rain shower which lasted less than twenty minutes but cooled things off a little more. I took a break to be nosy at one point, wondering what in hell was being cut next door with a chain saw. There is still no one living there and I had a huge fear that they might be taking down a live oak but no, it was two guys who were cutting up a tree which had fallen on the fence. I'd heard it fall last week but couldn't find anything down in my yard and didn't investigate further. Turns out the tree was, legally in my yard though, at the edge of the bamboo jungle. I think it was a small water oak. I asked the guys if they knew who owns the house now.
"A bank," one of them said. "Otherwise we wouldn't be here." I guess they work for banks doing just this sort of thing on foreclosed homes. They had no idea which bank though and we all agreed that it was sad that it was empty. And on my way home, I noticed that the honeysuckle vine which was cut entirely back is sprouting forth again from its thick stems. That made me happy.

Finally, just as it was time for Prairie Home to come on, I finished the weeding. Here's what I sent Mr. Moon. 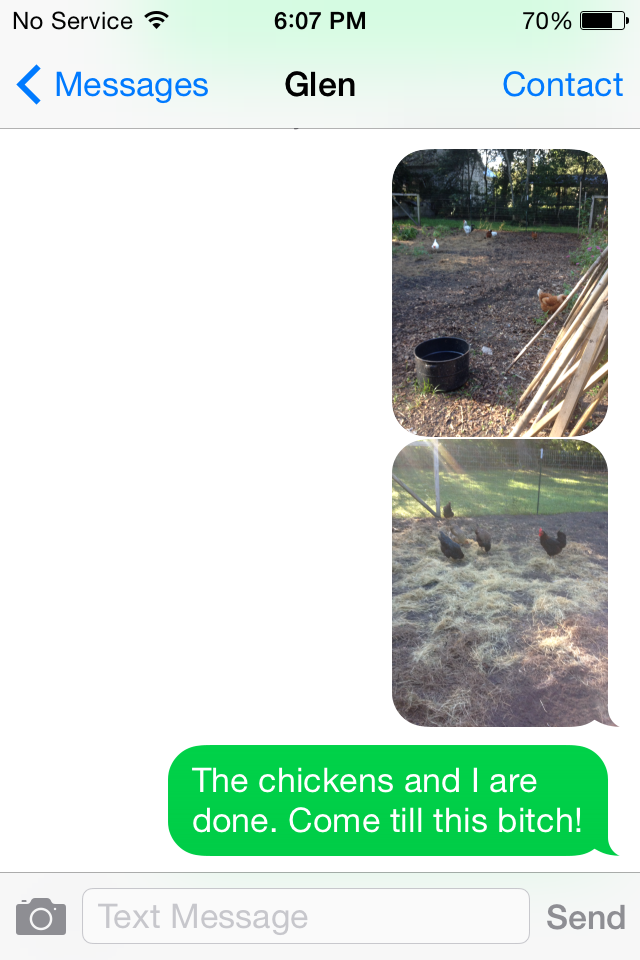 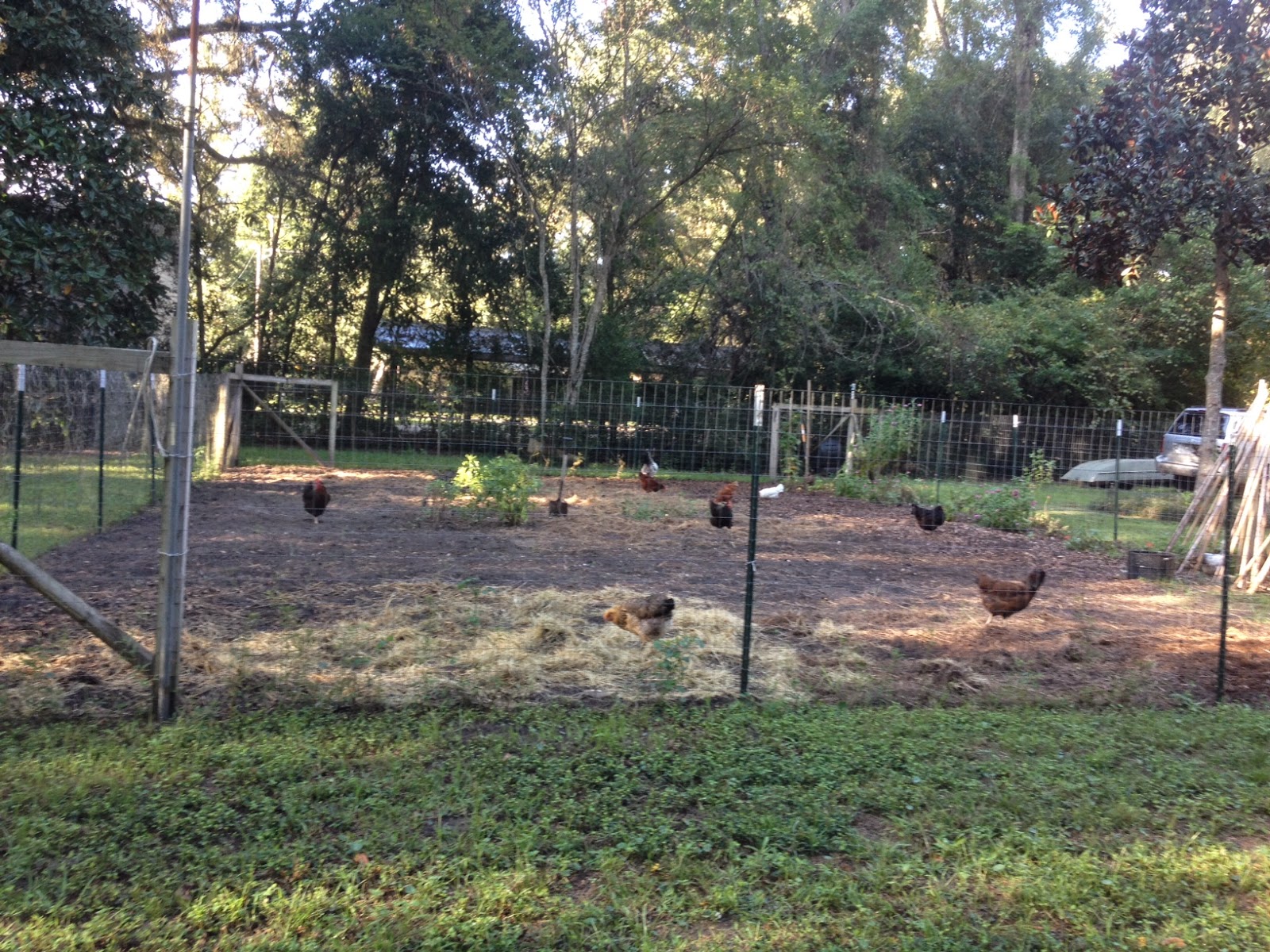 Honest to god, I feel as if I have truly accomplished something and I am at peace about that. I had a goal, I accomplished it. Now to have the man till it and I'll plant it and then mulch the fuck out of it. Collards, turnips, mustards, maybe even some kale to massage and bruise or whatever the fuck you do with that shit. Also mesclun and perhaps the best of all- arugula. Oh, how I crave that bitter green and the crap you get in the store is but a pale imitation of how it tastes when I go out, pick it, and bring it in to wash and eat.

It is a beautiful gloaming tonight. As the sun sank, it did things like this in my backyard. 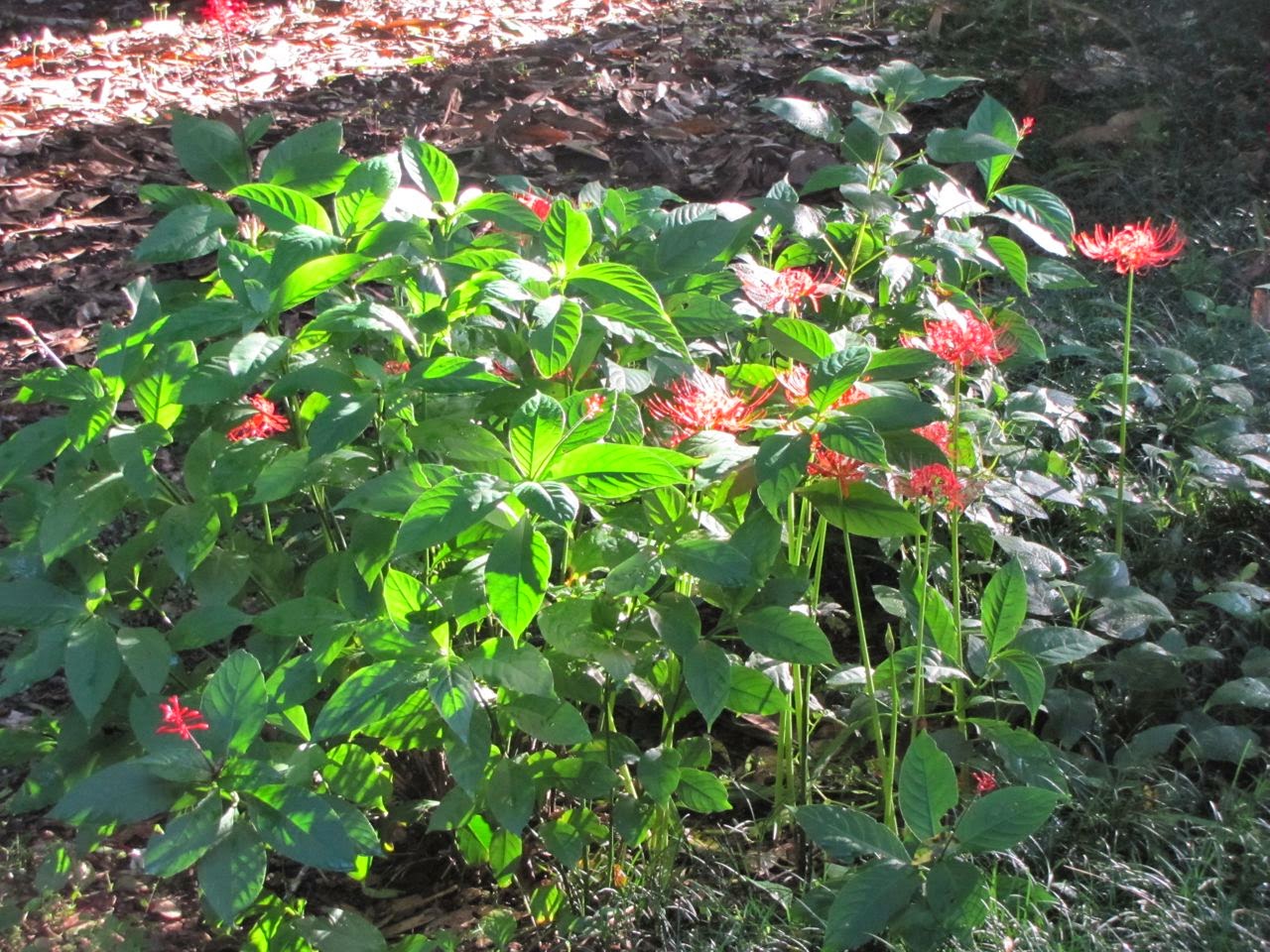 And Maurice even caught gentle fire in the light. 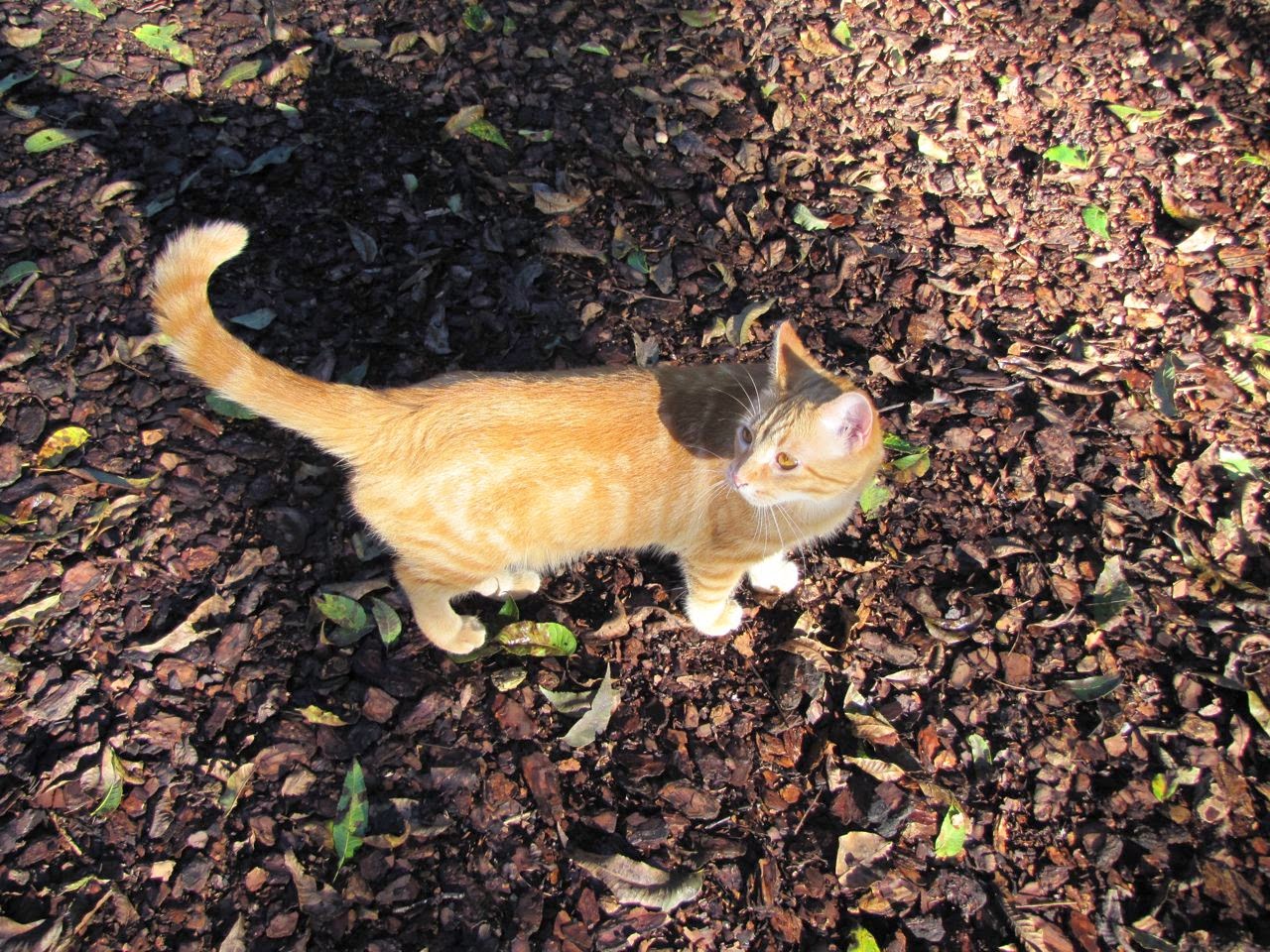 I am indeed watching bits and pieces of "Prairie Home Companion" as I write this. 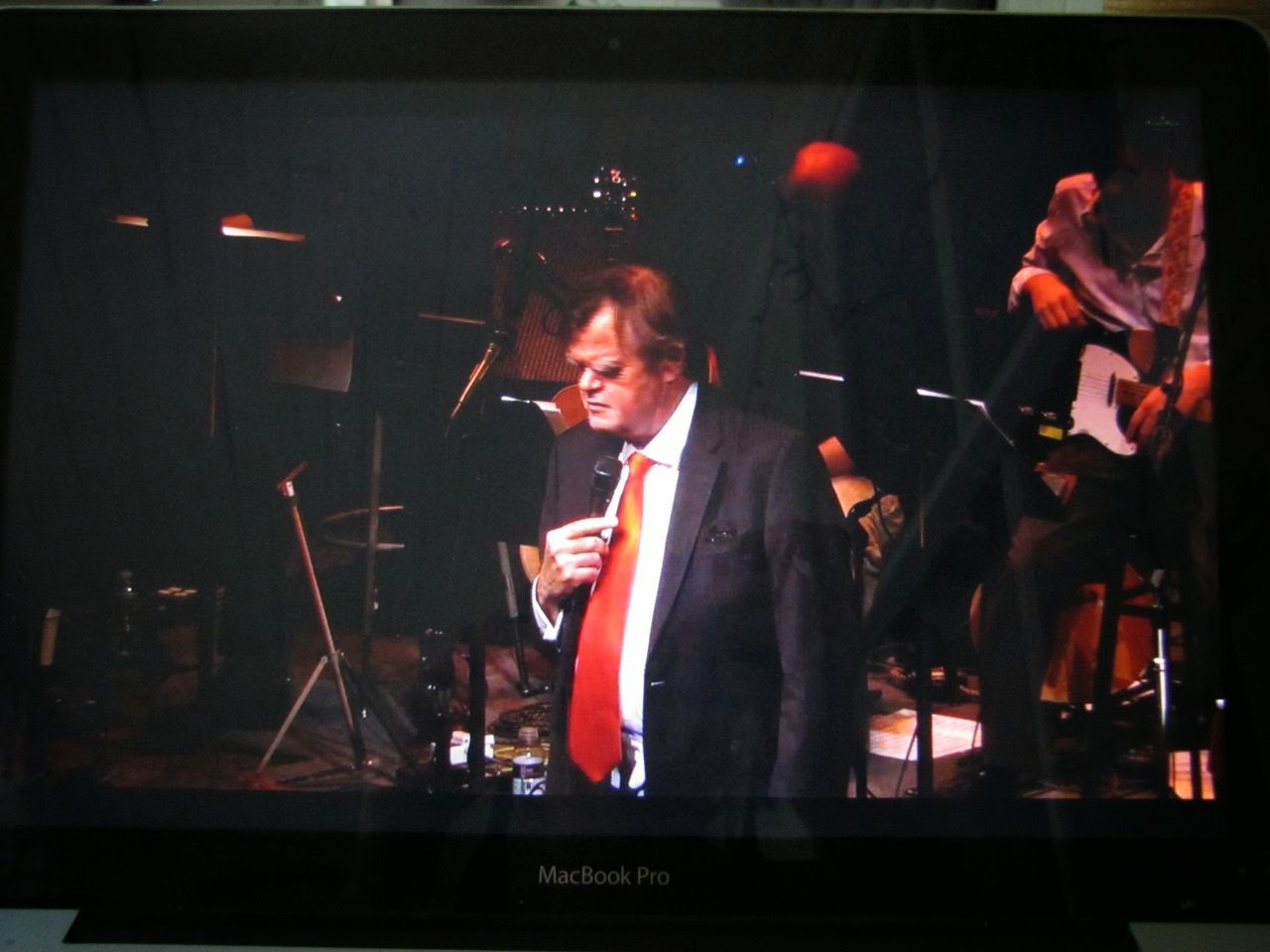 It's been a sweet reminder of what it was like to do our "radio shows" on the stage in Monticello. The sound effects guy, the foley, has a work table which looks very much like what Kathleen and I used in our shows, covered with telephones, cans, shoes, and all sorts of unlikely looking stuff. We used to have such a good time, doing those shows, knitting and crocheting in between our bits, making everything as visually funny as we could manage, passing a flask back and forth which we pretended to doctor our coffee with. The coffee in the thermos and the liquor in the flask were both actually red bush tea and the flavor of that tea still brings back those memories.
It all feels very sweet.
I believe I don't care to expend the energy to try and recreate a curry tonight but instead will simply cook a frozen spinach pizza. I surely hope I can figure out how to watch the Stones DVD. Mr. Moon is usually the tech guy around here and I am lazy and let him do it. I think I can.

Golly, Sue Scott is pretty and Garrison's eyebrows are two of the seven wonders of the world. I don't even want to discuss his hair. Still, I love him.

It is cool this evening, my doors are all open, no AC on. I may leave it off tonight entirely. It's supposed to get down to sixty-four tonight. Sounds downright comfy. I appreciate this fan dance fall is doing for us, flashing that blue lacy underwear, sending air kisses with her cool, dry, red lips.

The garden is weeded, the chickens are doing their final scratching of the night before they begin to drift into the hen house to fly up to the roost. My back is a bit sore but mostly I feel none the worse for my day in the garden. I've had a shower, the night is falling, Howard Levy is playing Bach on a harmonica and somehow, it's all pretty perfect. I miss my man but I'm glad he's doing what he loves to do and it'll be good when he comes home.

How the hell did I get so lucky?

I hear it's been a quiet week in Lake Woebegone. It's quiet here in Lloyd, too where all the women are strong, all the men are good-looking and all the children climb bamboo and feed the chickens.