Chicken News And Other Stuff 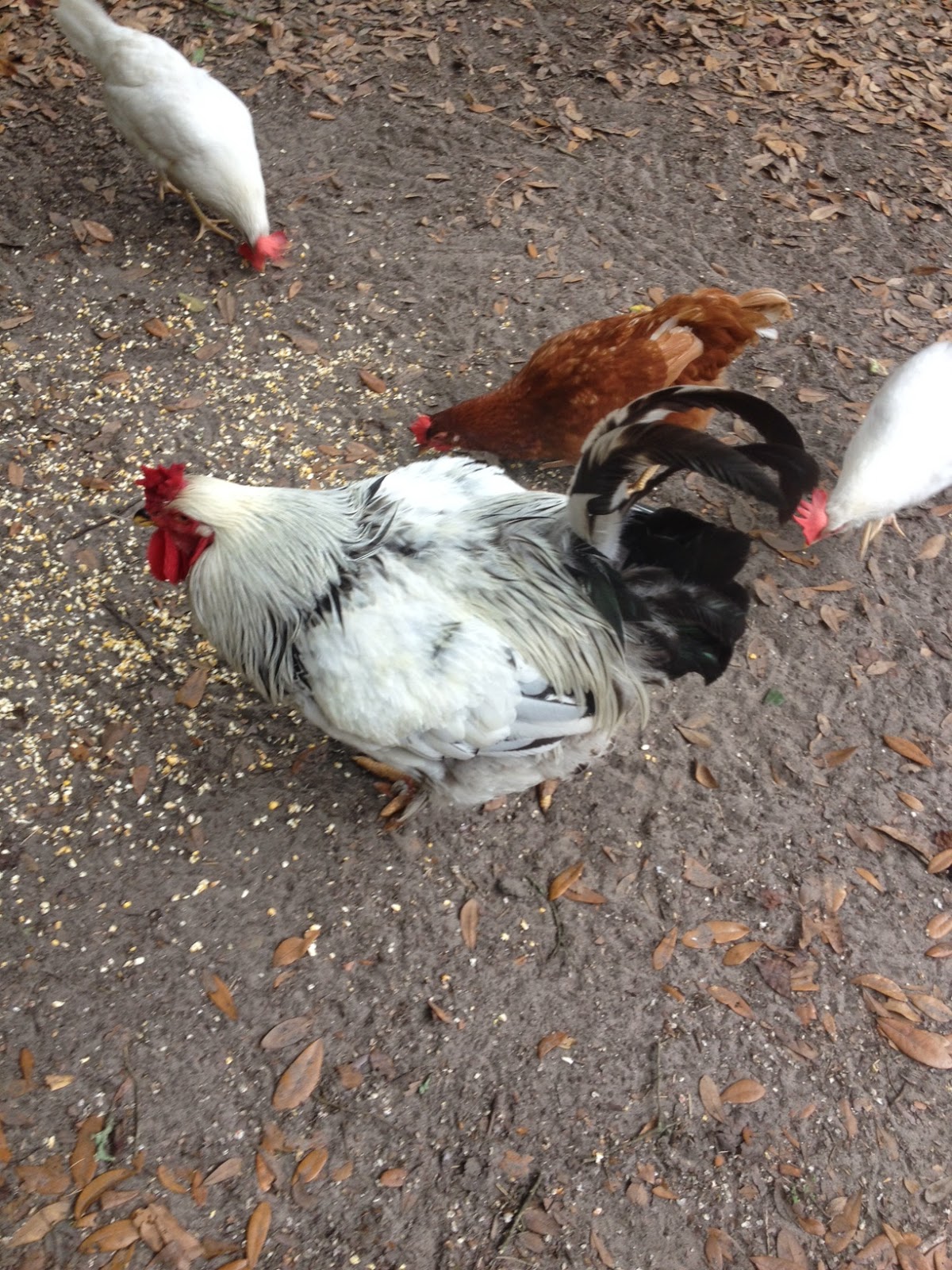 Elvis is down to three tail feathers, poor old rooster. This happens every late summer. He seems to know that his magnificence has dimmed, or perhaps he truly is just getting old. One of the reasons I was so happy to have Drogo was that I know in my heart that one of these days Elvis just isn't going to be able to do his roosterly duties for the sister wives and I don't just mean sex but I mean protection, as well. I had such hopes for Drogo and I am so sorry he's gone.
Well, next spring we shall introduce a new rooster into the flock and take it from there.

It's gray here today and the sky is a bit ponderous. It's not too hot though and that is good. I am moving slowly today, perhaps because my martini hit me hard last night which is probably because I had eaten nothing all day long except for a smoothie and Jessie's leftover curry from the night before which was so good that I decided that this weekend my goal would be to learn how to truly make it but of course it requires ingredients that, if they are available in Tallahassee, I do not know where. I bought some green curry paste though and will perhaps try to make a fake version.

I got this picture from Mr. Moon this morning. 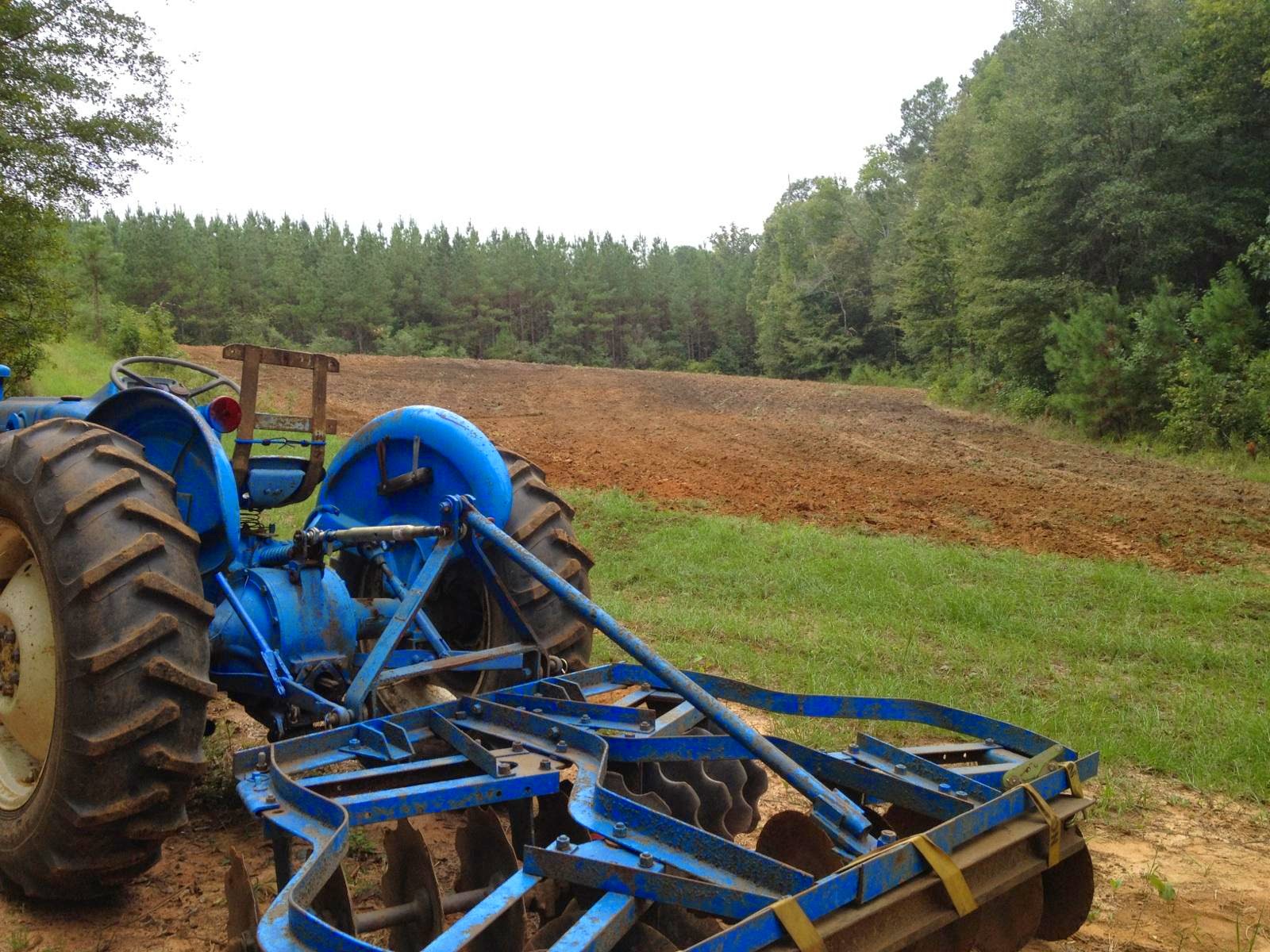 He is up in Georgia, tilling the field to plant his food plot. Now I know nothing about hunting but I do know that you can't actually shoot the deer when they are in the food plot and that some people disdain this sort of hunting but I look at it like this- he's feeding a lot of deer. Probably fifty deer get fed for every one deer that ends up feeding us so it's a pretty good deal for the deer. Not to mention birds and bears.
I asked him if he was a hunter or a farmer and he replied, "Both," and he loves being on that old tractor and plowing the red dirt. Having been once married to a man who spent his time away from home in far less wholesome activities, I am quite content with seeing my man go off to plow and plant and eventually hunt. I certainly never envisioned myself as being married to a hunter but then again, I never envisioned myself as being married to a man who was closer to seven feet tall than I am to six feet tall.
One never knows, is what I'm saying here and isn't that truly a fine thing?

I just got an e-mail informing me that I can live-stream and WATCH Prairie Home Companion tonight via the computer. Well. Now I have a plan if my Rolling Stones DVD doesn't get here. That's quite a contrast- Garrison Keillor and his news from Lake Woebegon live or Keith Richards in the most junky Mcjunked-out phase of his life.
Or both if I am lucky and the DVD gets here.

I think I will walk down to the post office and see if the Gods of Rock have smiled on me and then it is time to get in the garden.

More hurricane lilies are popping up and blooming everywhere and a hawk is making his bold yet mournful cry and Missy is still on the empty nest and Eggy Tina is either not laying either or is laying somewhere I cannot find and my husband is in Georgia and I am here and we are both farmers but he is a hunter and I am not. I am a gatherer though. Owen called me a little while ago to tell me that the next time he comes over he is going to swing from the rope onto the branches of the tree and thus, he will be just like Tarzan "who never grew up."

I hope he wears the red velvet shirt when he does this.

I am finding dead banana spiders everywhere but their eggs are wrapped in silk and there will be more next summer.

Fall is coming. It feels a bit forlorn with this gray sky, with that piercing hawk call.
Some days it is like that.