We Travel And We Arrive 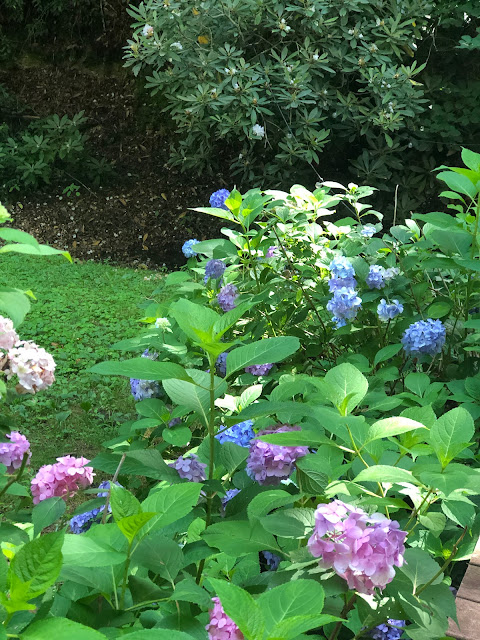 We are here in North Carolina with two beautiful boys and their beautiful parents in a beautiful cabin surrounded by trees and flowers. It is a sort of heaven. Right now just the boys are with us as Vergil is working and Jessie is running some errands. The internet isn't the best here so Vergil had to go back to their place but he'll be back this evening.

Our trip up was mostly uneventful except for one major carnival of errors and technical insanity to the point where we had two GPS programs going, both on audio, while I was trying to figure out what was wrong with my phone which was playing music and I couldn't get it off, AND Mr. Moon was reading a map while driving, AND we couldn't get the GPS audio off, AND then we passed about the ten thousandth brand new Dollar General Store we'd seen on the way up and I couldn't handle it and I made an obscene gesture to it and both of us starting laughing so hard we couldn't breathe and we were exactly and entirely the most cliched of cliched Old People Traveling and I actually started crying, really crying, and realized I had hysterics for the second time in my life and Mr. Moon pulled over and we had to take some time to recover and deal with all of the electronic devices and I'm sure there was another Dollar General within the next two miles. I am certain that there are now as many GDDG's in the South as there are Baptist churches and honey, that's a LOT!

But soon we got to Athens and checked into our room and had a wonderful dinner and good sleep and the next day, which was yesterday, we made it to Black Mountain and we have seen many things and eaten many things and I've read a whole lot of Fried Green Tomatoes out loud and here are some pictures. 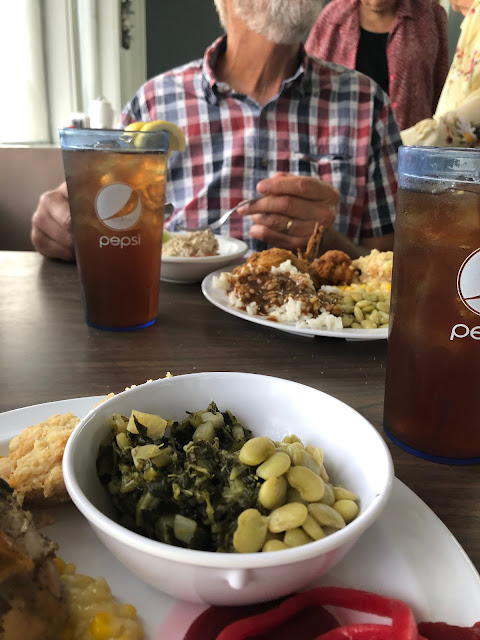 Our first lunch on the road, somewhere in rural Georgia. We dined with the after-church crowd and I was afraid to speak for being outed as a Democrat which might have been scary. But as you can see, the food was good. 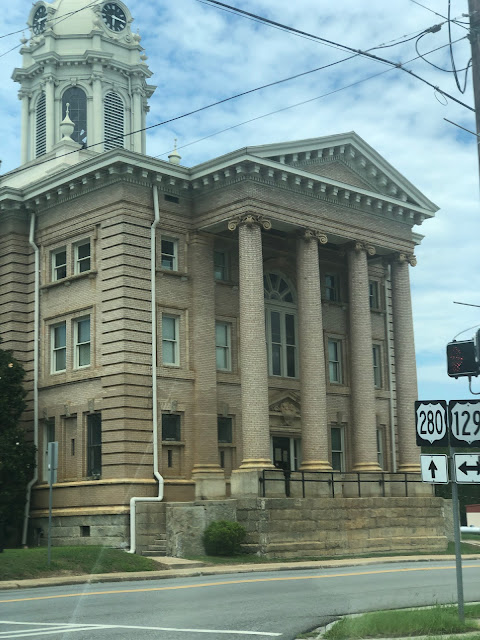 One of the many truly beautiful courthouses we passed in Georgia. 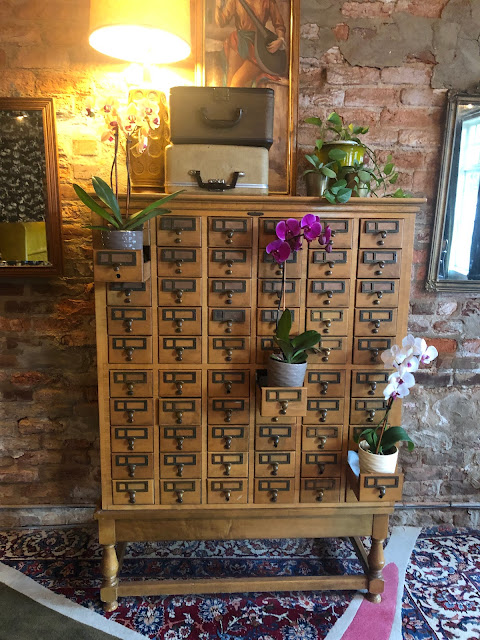 A decorating feature in the lobby of the Graduate Inn where we stay in Athens. I just love that place. 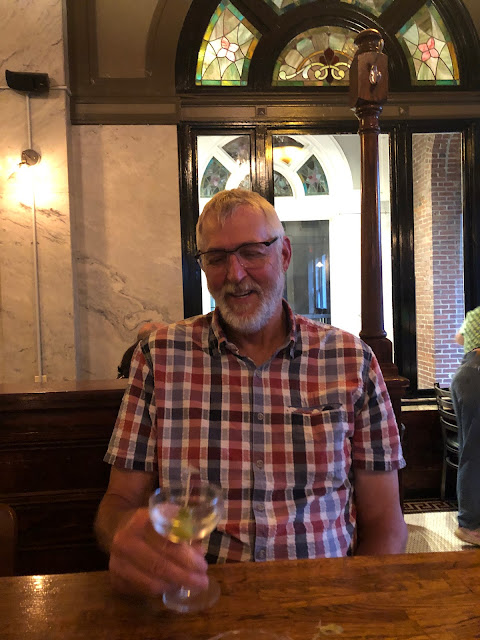 Mr. Moon and a martini at the South Kitchen+Bar in a gorgeous old building in downtown Athens.
Athens is a cool town. A college town with a lot going on but not quite the amount of hipsterism as in Asheville. Not that there's anything wrong with hipsterism. I do love me some hipsters. 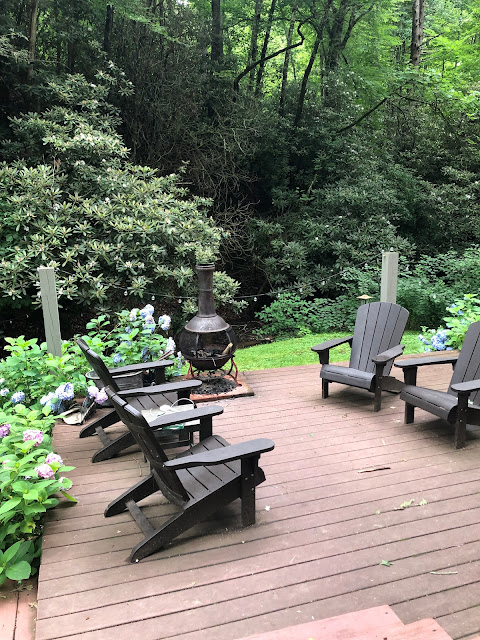 One of the decks here. 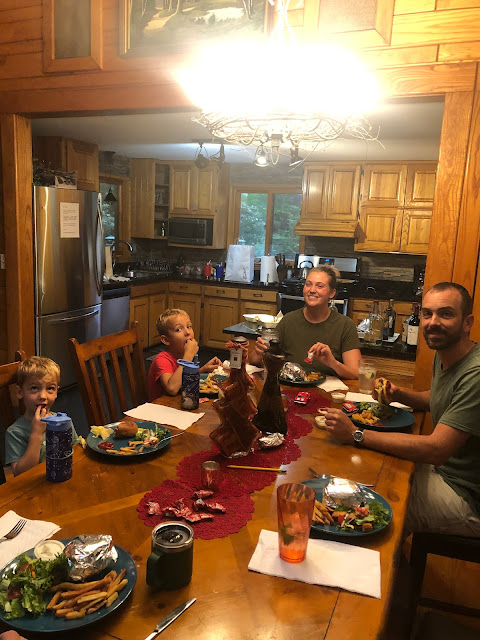 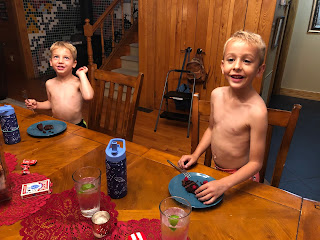 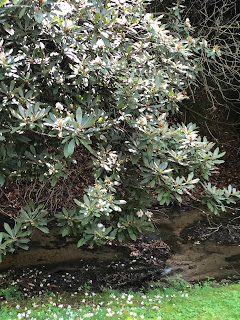 Rhododendrons growing around the tiny creek in the yard which makes the sweetest sound as it chuckles over the rocks.
More later, I am sure. For now though, I have boys to make lunch for. I am love with this cabin. It is filled with wood paneling and light and we have the windows open because it is so cool and I feel right at home and very happy.
Love...Ms. Moon
P.S. On the way way here yesterday we passed through a small town called Bat Cave, North Carolina. BAT CAVE! Who wouldn't want to live in Bat Cave?
Posted by Ms. Moon at 12:35 PM