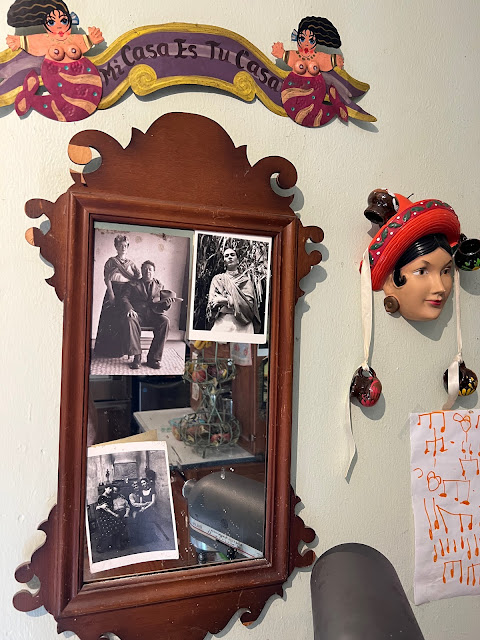 Here's a little shot of what Mr. Moon calls my "clown decor." He was raised in a very traditional house with a very traditional decorating scheme. Curtains that weren't made of old pieces of vintage bark cloth, pictures on the wall instead of someone's thrift-gift of ceramic hand-painted Senors y Senoras. Probably no cool postcards of Frida and Diego stuck in a mirror in the kitchen.
I think my husband would probably be a little happier if I did things like have stenciled borders on wallpaper in the bathroom with towels to match but whatever. He loves me. He tolerates my eclectic and fanciful style. I think he's even come to love it in a way although I may be overstepping myself with that statement.

I have been so lazy today! It's been a fuck-it day. But I've enjoyed it. I made a big pot of my favorite NYT's recipe's Best Black Bean Soup which has been simmering all afternoon. I started a loaf of sourdough last night by making a sort of sponge with the starter and half the flour and some water and let that sit all night and then this morning I mixed in the rest of the flour and water and salt and it has had two rises today and this is what it looks like. 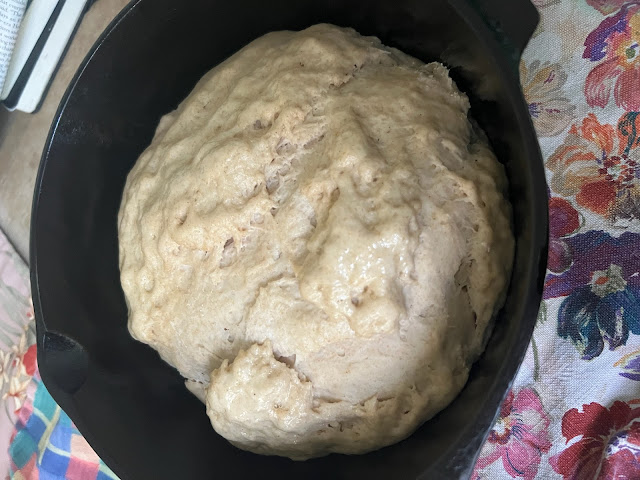 Is that not the saddest loaf of bread you ever saw? I mean, it's not baked yet but still- it's as lumpy as someone's face after running into a bee hive.
Oh well. We shall call it "artisan."
I cannot really figure out how to time the rising of sourdough in order to bake it just before supper. If I make up the dough and put it in the refrigerator the night before, it can take all day to warm up enough to even begin to achieve the height it needs. If I wait until I get up and get moving in the mornings, it certainly doesn't have enough time. Not really. Any suggestions that do not involve me getting up at six a.m.? Because that ain't gonna happen.
Looks who's home! 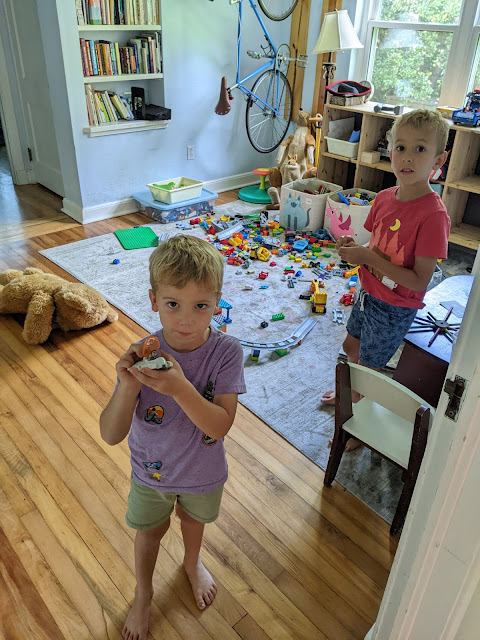 The Weatherfords are back in Tallahassee! We have not seen them yet but those two boys will be spending the night tomorrow. Jessie has a staff meeting on Tuesday and Vergil will be working and they have a lot to do to unpack and get settled so those boys will be here for a good visit. I hear that last week, Levon got his first crush. He and a little girl who was camping where they were, bonded over the fact that they both had stuffed black dogs as favorite cuddle toys.
It went from there as these things do.
I have a terrific picture of them but since I don't have the slightest bit of permission from the young woman's parents, I won't post it. In it, they are both sitting in Jr. size camp chairs, Levon looking a bit bewildered while trying to look cool, while Hazel, the lady of his affections, is holding BOTH black dogs (so you know he loves her if he let her hold his) and looks entirely in charge of everything. She has a band-aid on her left knee which only adds to her charm. So you can be sure I will be asking the boy about her. Of course, when they get here, they will walk right past me, say, "Where's Boppy?" and head his way.
If I were of the jealous type, I would resent this but actually, it makes me so grateful that I married a man whom the grandchildren love so deeply and dearly. I done good.
Okay. Here's a random picture. 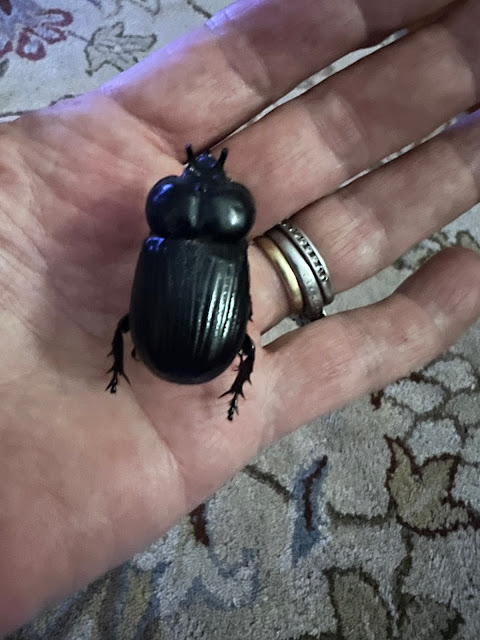 It is a recently deceased beetle whose formal name is Eophileurus Chinensis, aka Rhinoceros Beetle. You can see why. We found it in the Glen Den last night. For whatever reason, these guys do not bother me like, oh- roaches do.
I saw a roach in my bathroom the other night that was so big that I just apologized, turned off the light and closed the door. And then- that very same evening, just as I turned out the light, some insect flew into my left ear and I was so freaked out that I almost woke up my husband who was already asleep. I have feared a bug flying into my ear my entire life. And here I was, in my BEDROOM, and it had happened. All I could think of was that it was a German roach, which is a much smaller version of the giant cockroach I'd just seen in my bathroom and which look like this. 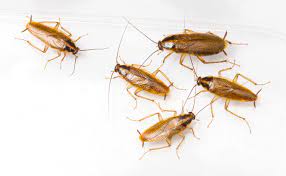 What to do?
I picked up my phone and turned the flashlight function on and held it next to my ear, hoping that the insect would be drawn to the light and exit my ear canal. I guess it did because I'm pretty sure that it's not still in there.
Man. That was traumatic.
Oh, Florida. Why do I live here? Probably because I've never moved to Mexico or Puerto Rico or Belize. The exotic is erotic to me, at least in some instances. Not all.
I suppose I should go preheat the oven to bake the loaf of bee-stung bread. Isn't it funny how bread-making, like gardening, can be done for many decades and yet never be perfected?
I think the best things are like that.
Love...Ms. Moon
Posted by Ms. Moon at 6:21 PM