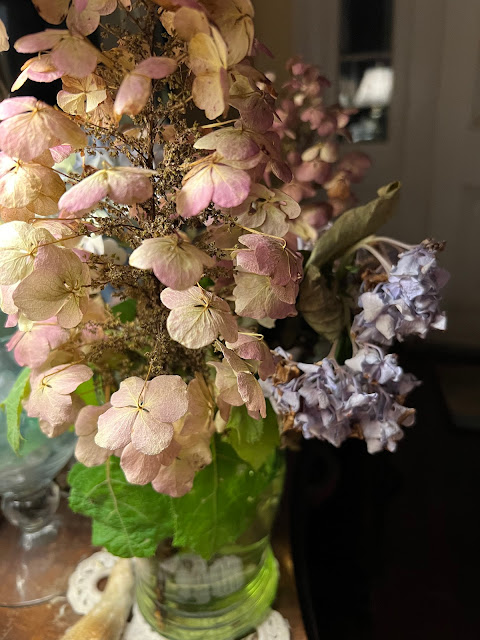 That's a picture I took last night of the hopefully-rooting hydrangeas in my hallway just to see what the camera can do. It was totally point and shoot, no lighting arranged, no editing of the photo. I think it is beautiful.

Everything finally got downloaded last night before I went to bed. Or is it uploaded? Hell if I know. August would know. He corrected me on that very subject last week. I think of how easily all of this technology will come to my grandkids and it astounds me. Like I told Nick Anthony yesterday at Verizon, we old people have had to come a long way- when we were young, transistor radios were the hottest new technology while his generation has just absorbed it all from the zeitgeist since birth. I think what I was really saying to him was to be patient with us old boomers, we have actually come a very long way. But oh- how easy they have made some things. After I got all my data on my new phone it was even paired with my air buds and my library audio book was right there, ready to listen to. Which, by the way, is Hannah Gadsby's book, "Ten Steps To Nanette." If you have never seen her comedy specials, you should. I wrote about the one called "Nanette" almost four years ago here if you want to hear what I said. The post also has some extremely darling baby pictures. The book is good. Gadsby is a fine writer and she has had a most interesting and also difficult life. I am fairly certain she wrote it herself.

Today was busy. I drove into town to take Hank to a doctor's appointment. Rachel has a new job and has to take the car and Hank has been having episodes of light-headedness which make him uncomfortable to drive anyway which is why he went to the doctor. Could be a medication he's on which they are taking him off of.
Anyway, after that I went to Publix and Costco and did my shopping. After I got home and had everything put away, I watered porch plants and checked on Darla who is still alive, still not moving. She drank a little water today which is good. She is so thin. I am wondering if going through a brooding period and raising those three chicks hasn't just worn her out. Poor, sweet little thing. Her kids are running the yard on their own now and seem to be fine. Violet's bebe is much larger than she is now. 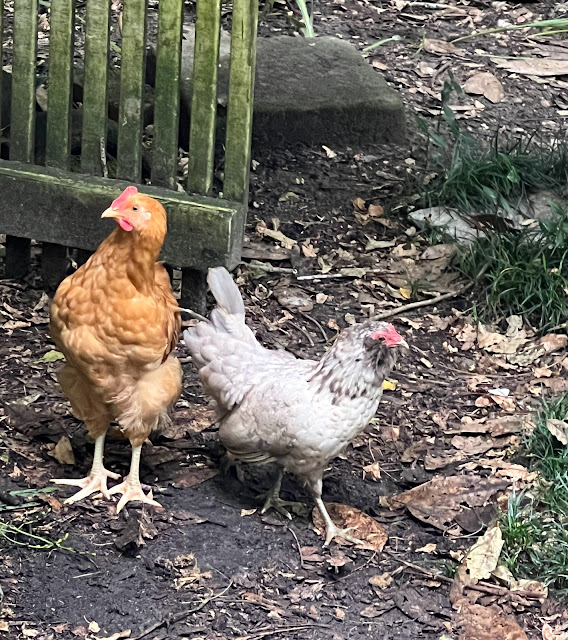 He's still hanging with Mama. I think he's probably a rooster. Hell, I think they're all roosters.
I picked green beans which was a hot, humid, sweaty business. I feel so sorry for all of you who are suffering such incredibly brutal heat without air conditioning. At least I can get cool when I come in the house. The green beans went crazy while we were gone. 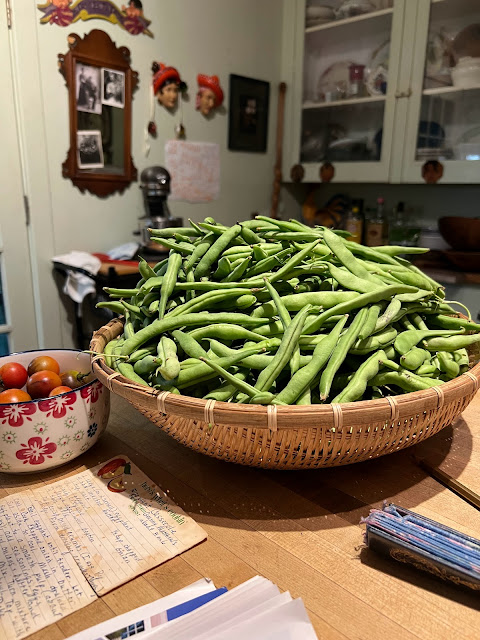 The field peas desperately need picking too but I just couldn't make myself go back out and pick one more bean. The tomatoes are almost gone, the plants bearing the large ones mostly dead. Bad year for tomatoes. I am happy to see though that the okra appears to be taking off and the eggplant is still giving me a few of their deep purple-black fruits. I sure do need to get out there and weed.
Here are a few more pictures I took just for fun. 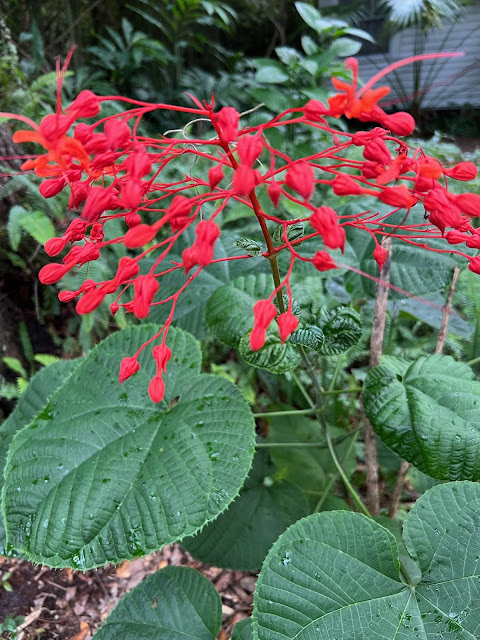 That's the Japanese Glory Bower that I helped myself to a piece of from next door when no one was living there. It's related to the Glory Bower that is completely invasive and which I loathe because I'll never get rid of it. This one does not seem to spread at all although perhaps the next folks who live here will curse me for introducing it to the yard. 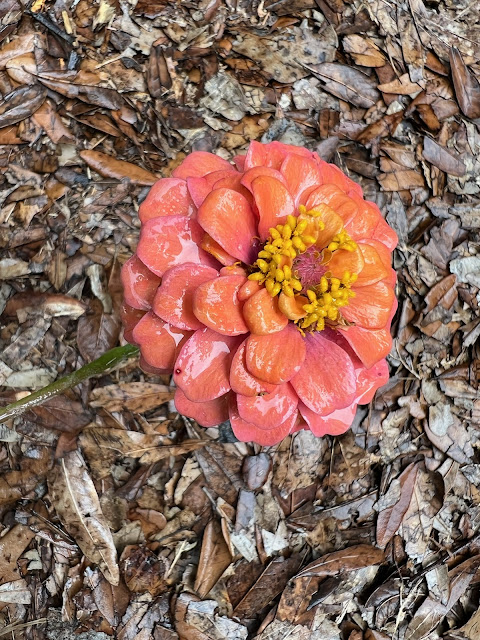 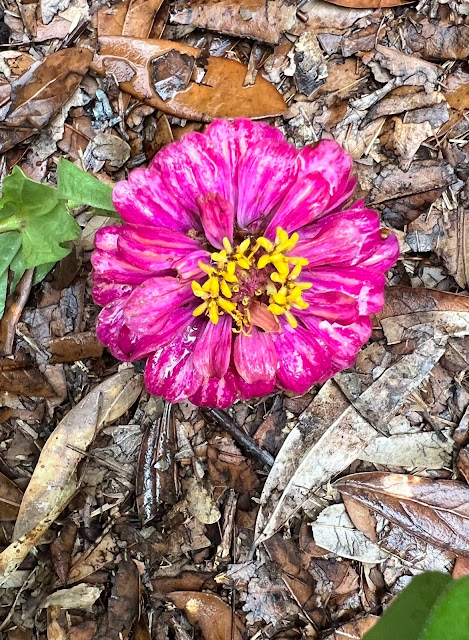 Just two volunteer zinnias in the garden whose pictures I took simply to see what the camera would do with them. I think the detail is pretty fine.
And here's a rose (thank you, Ellen!) which didn't come out quite as well but still, a rose is a rose. 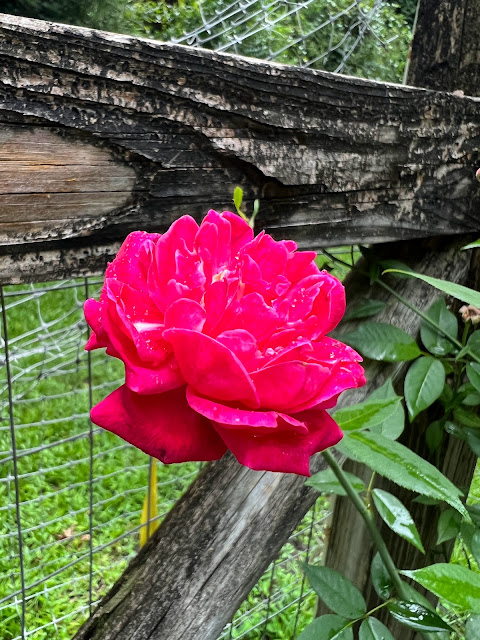 All in all I love my new phone. Oh, the energy I have wasted, hitting a home button! My poor fingers!
Ha.
But truly, it is a fine device and if you had told me back in 1960-something when I was lusting after a transistor radio in a black leather-like case, that someday I would own something that could do all that an iPhone can do, I would never have believed a word you said. I think the thing that would have intrigued me the most would have been the ability to LISTEN TO BOOKS with it.