Maurice Is Just Maurice And I Am Just Myself 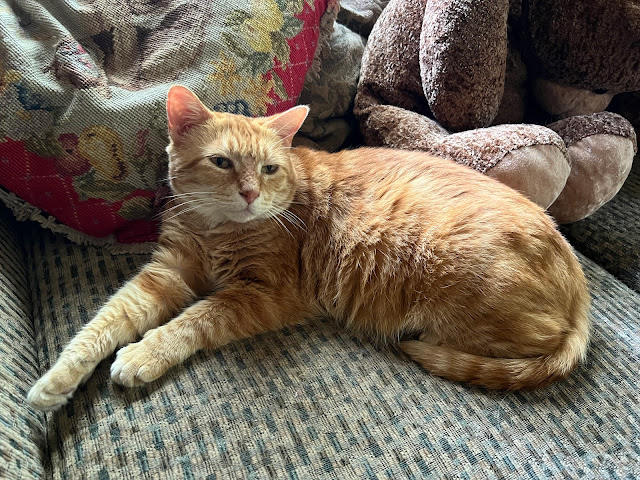 I should not have said yesterday that Maurice is getting weirder and weirder. She really isn't. To be more precise, I think that Mr. Moon and I are getting less patient with her and less tolerant of her sudden and unprovoked attacks which probably aren't even as frequent as they used to be. Of course now she also shows her displeasure (I guess) by occasionally pooping on a rug or peeing in the pantry which only adds to our frustration. I believe that behavior began when a big stray male cat started sneaking into our house, terrorizing both her and Jack. And peeing on things in a failed attempt to assert his territory in our house. Come to think of it, I haven't seen him in forever so maybe he's gone to live on a farm.

I used to try and figure out why Maurice could be so sweet one second and so vicious the next and ended up believing what one cat behavior expert said which is that some cats just bite and scratch and that is all there is to it and the best thing to do is keep bandaids at the ready.
While we were on our trip, I got a text from Mark who told me that Maurice had been petting herself with his hand and he was terrified. I do not think she scratched him. I guess she liked him. She certainly does not like children and all of my grandchildren are terrified of her. I have told you before that Maggie started calling her "Scratch" quite awhile back. August has told me more than once that I should get rid of her. Jack, on the other hand, is called "The Sweet Cat."
I am sure that Maurice had a terrible childhood. When she showed up here, nine or ten years ago as a mature teenager and decided that she would deign to move in, she didn't seem exactly feral, but obviously had her quirks. I took her to a vet to see if she was chipped, she was not, so I got her spayed and she's been here ever since.
We do love her, despite the many times she's made us bleed, and I have noticed that when I am sick or injured, she stays by my side. This has happened enough times that I am sure it is not coincidence. She is empathetic, in her way. I call her my "nurse cat". Before I went to the hospital the day my appendix began to attack me, I was laying on my bed trying fruitlessly to find a place of comfort and she was right there with me the whole time. When I broke my ribs she slept with me every night in Glen's recliner which was lovely except that every time I dared to move, I feared a quick flash of claws, a bite, a serious reminder that she was not to be disturbed in her vigilance. And that's what happened the other day to Mr. Moon. She likes to lie in his lap in the mornings when he gets up and has his coffee and reads the news online in his chair. This is their time. BUT, if he so much as adjusts the laptop, she becomes very bitchy.
Sigh.
Love hurts, I suppose. At least when that love is coming from Maurice, the Ginger Cat of Lloyd.

I was terribly unmotivated today. I was sort of motivated to get out in the garden and do some more weeding and perhaps spread a little mulch about but after an hour in the sun I had to give it up. I loaded one bag of mulch into the garden cart, thought, "Nah, I cannot do this," and came inside. I didn't even have the strength to pick beans and, oh, honey, they need picking again. 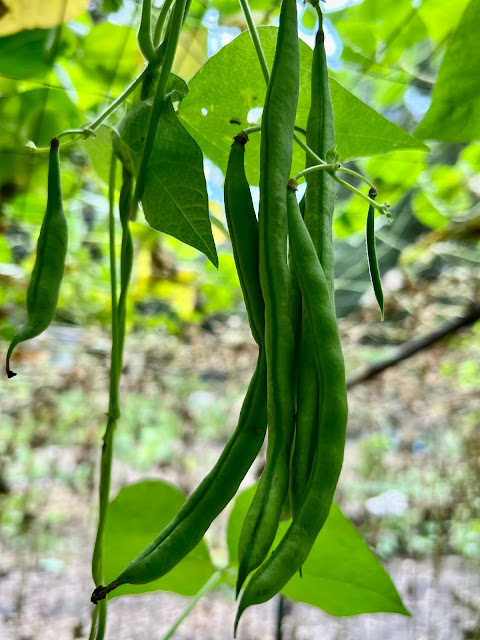 So do the field peas.
Tomorrow. It'll all still be there tomorrow. Weeds, mulch, beans and field peas. Just waiting like Penelope with her loom which is a little how I feel as the man is back at the coast fishing. He was just back last night long enough to bring Owen home and get some dinner and some sleep and this morning he got up at 4 a.m. to head back down with a friend to go out on the Gulf again. He's just texted me that they are safely back on shore, covered 115 miles today and that he caught Mahi-Mahi which is rare. He is happy. He couldn't stop bragging on our Owen last night. He was so proud of how he fished, how polite he was, how good-natured. And I think that Owen had a mighty fine time and this thrills me. I told him yesterday that his grandfather has been looking forward to taking him fishing since the second he was born and it is true.
The older I get, the more I wonder what in this world I have done to make any sort of difference and I can't think of much. The one thing that brings me some comfort is the thought that my grandchildren will grow up knowing that they were loved and cherished by me and by their grandfather, too. And if there is one thing I know, it is that no matter what happens to a person in life, the more love they have known in their childhood, the better.
So. There is that.
Here's a picture of a butterfly I took today. 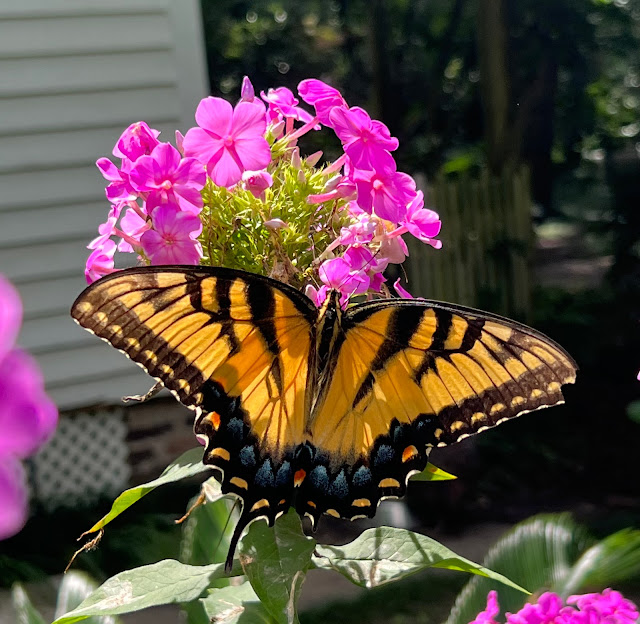 An Eastern Tiger Swallowtail, although one of its swallowtails is missing. I had to take many shots before I got that one. Butterflies are just way too busy. No matter how sweetly you ask them, they will not pose.
I'll end with this. For whatever reason, probably because St. Dolly Parton was mentioned, I clicked on a link today and I ended up with chills in my body and tears in my eyes. These ladies hit me in all the places that trigger my emotions. Watch it or don't. But like Simon Cowell kept saying in the video, "You have no idea how much I needed this today." Maybe you do too.
Damn. Remember their name: Chapel Hart. They're going to be huge and well they should be.
All righty then, happy Friday. Guess I'll go make my own martini and put the clean sheets on the bed.
Love...Ms. Moon
Posted by Ms. Moon at 7:23 PM