Trip Report And Other Stuff 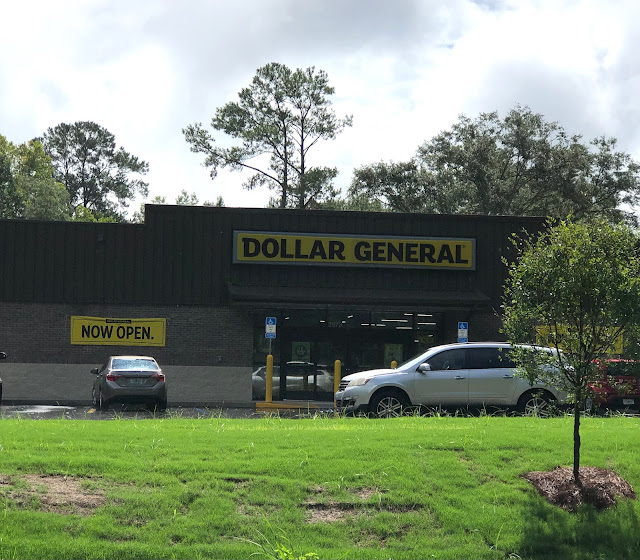 As we drove up to North Carolina and then back to Florida, the number of Dollar General stores we saw was uncountable. I mean it was truly mind-boggling. Every damn bend in the road in the most rural of rural places has one of these ugly monstrosities now, each and every one with a sign that says, "Now Hiring!" and many of them obviously brand new with signs like the one you see above that say, "Now Open."
As we drove, I wondered if I would return to Lloyd to find our very own personal Dollar General already opened and indeed, I took that picture this morning. They are stocked, landscaped, and open for business. The only saving grace is that you truly cannot see the place until you are right beside it. The woods on both side of it hide its presence.
All I can do at this point is sigh and tell myself I did my best to stop the project but we all knew that wasn't going to do a thing. All those phone calls to environmental agencies and the powers-that-be in Jefferson County were a total waste of time. Is there a way for me to be accepting and all Zen about this?
I suppose I should try. But at the moment I feel as if these stores are a pox and a plague, selling shit that will end up in the landfill and sooner, rather than later.
We shall see.

In sad chicken news, there is something wrong with Darla, the mother of three of the babies which are no longer babies at all. She is on the ground in the hen house in what we have taken to calling The Death Corner because so many hens have gone there to die after a fatal attack. I do not know what's wrong with her. I picked her up and examined her and could not find a mark on her. I put her back on the hay covered ground and she literally isn't walking. I gave her food and water but she doesn't seem interested at all. I am truly afraid she is dying. Mark says that she wasn't lying there when he was here so this is a recent event.

Other than that, all seems very well here. Jack stalked me last night until I went to bed and he joined me the second I laid down, snuggling up as if he truly meant it. Jack never, ever vocalizes but he does purr and he was purring loudly when I was giving him scritches.

When we were on our trip, on the first day in fact, my phone's home button quit working. The fact that the phone has a home button is indicative of its age, which I believe is about five years and of course in phone years, that's a Methuselah. And I use it so very much for everything from audio books and podcasts to taking pictures to sending and receiving texts, to reading the news and checking Facebook, getting the weather forecast and being my back-up brain via Google. I did read online how to utilize a feature I had no idea I had to do a work-around for not having a home button and it worked but it was so inconvenient and besides that, it wasn't taking a charge very well and things were getting wonky, being upside down on the screen or sometimes sideways and well...
Methuselah phone.
So today, after having a very nice lunch with Mr. Moon and Hank and Lily and her darlings, Glen and I went to Verizon where we looked at our options for getting a new phone for me and that takes about twelve hours but the employees who help us are always invariably pretty awesome. Today our guy was Nick. I asked him his name when we'd spent at least two hours with him and he said, "Nick," and I said, "Oh, I thought you looked like an Anthony." He raised his head from what he was doing and said, "That's my middle name."
I swear. This did happen.
Anyway, Nick Anthony is not the point, although he was definitely the interesting and helpful facilitator and I am now the extremely excited and thrilled owner of a new iPhone which has bells and whistles, I am sure. I am doing the data-transfer as we speak from my old phone to the new one and this may end up taking all night. I believe our internet here is probably deathly slow although it usually suits me fine.
I am very glad to be getting a new phone as the camera is supposed to be pretty amazing and it has a jillion more whatever-they-are of storage and I won't have to constantly be deleting apps and so forth in order to use the phone. I will completely admit that I am not only addicted to my phone but also dependent on it. Having to do without it for even the short time I've had to give it up today has been weird. I had to make a roux without listening to either a book or a podcast! Of course I read an article in the New Yorker while I stirred which worked out just fine but still...

So yes, we are having a gumbo tonight. We stopped yesterday at a little place in a little town where produce was being sold and bought some okra. We also got a few peaches and a bottle of cane syrup. We did not find our peach-place where we bought that huge crate of them last year and we are both disappointed. I SO wanted to make more peach preserves and pickled peaches.
Dang.

Our drive up to NC and back was mostly on the most back of back roads and we drove past many miles of fields with soybeans, corn, cotton, pecan trees, and even a few fields of sunflowers. I read and I read and I read out loud, "Fried Green Tomatoes At The Whistle Stop Cafe" and there is no way in hell that my husband could have enjoyed the listening as much as I enjoyed the reading. I am an actor at heart and Fannie Flagg's characters have such very fine and distinct voices and her gift for dialogue is a good and gracious one. And the story itself- well. It moves along at just the right pace, never bogging down, always moving forward, taking you with it. I still have about sixty pages to read and I told my husband that we need to take another trip very soon so that we can finish it.

As I said yesterday, the south is such an interesting place. As we drove we went through so many tiny towns with the most beautiful old homes you can imagine. As Glen said, "Sherman didn't burn 'em all." Some palatial, some not at all, some in the towns, some on hillsides in the middle of farmland. Some restored and preserved and proud, some in dire need of love. Now don't get me wrong- there are also sad little areas where every other business is a pawn shop or title loan place where I am sure that a meal out at a Huddle House (best damn waffles in the land!) is a huge, big deal. We were passing through one of those yesterday, hungry for lunch, thinking that Dairy Queen was going to be our best option when suddenly we were in a place called Dublin (this was in Georgia) with the tidiest downtown with beautiful old brick buildings and we made a left and found a seafood restaurant that would not have looked out of place in Atlanta. 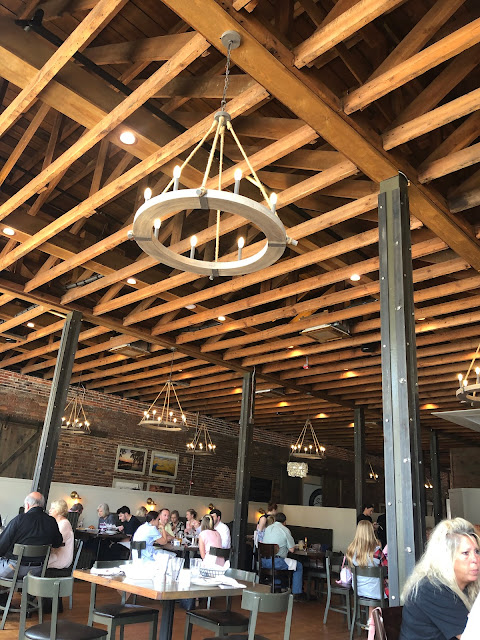 It was cool and hip with an impressive menu. I got a crab cake with a fried green tomato slice and remoulade sauce that had more crab in it than any crab cake I ever ate in my life.
And- in the spirit of the name of the town, three of the servers there had red hair. Real red hair. Natural red hair. Beautiful red hair.
There was also a woman dining who had Dracula teeth. I am not kidding you. She was a beautiful, well dressed woman with Dracula teeth. I immediately texted my kids to ask if this was a thing that people were doing, cosmetically. Hank assured me that it was. And it's not cheap.
Okay. Who am I to judge?
The South. I can't begin to explain the mysteries of it. There are the Trump signs and the religious signs and yet, there are also beautiful women with Dracula teeth and fried green tomatoes with remoulade sauce and a billion churches and a billion Dollar Generals. There are lovely old men and their grandsons selling okra and cane syrup and plantation houses turned into B&B's and proudly gay-owned coffee/smoothie shops and there are also places like the restaurant where we ate supper on Saturday night which was a steak house that someone Glen knew had recommended. It was loud and noisy and people of all colors and descriptions were eating there, drinking and loving life.
We sat in the bar area to avoid a wait and I tried to remember the last time I'd eaten or even been in a place like this. It felt a little bit sleazy and it was very dark and I sort of loved it although almost every person in that bar area was a man and there were sports on the screens above the bar. 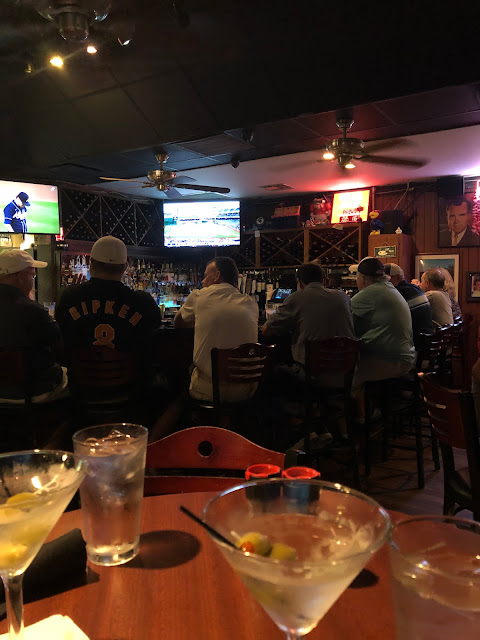 But the martinis were delicious and generous, the food was extremely satisfying. We got salads, potatoes, and steaks, of course and I fell in love with our server because that is what I do. She was a veteran server, I could tell. She was not taking any shit whatsoever. She was doing her job. At one point she came to our table and I had my fan out as the AC was not getting the job done and she leaned on our table and I fanned her for a minute and she closed her eyes and said, "I just want to go home and go night-night."
We tipped her well. 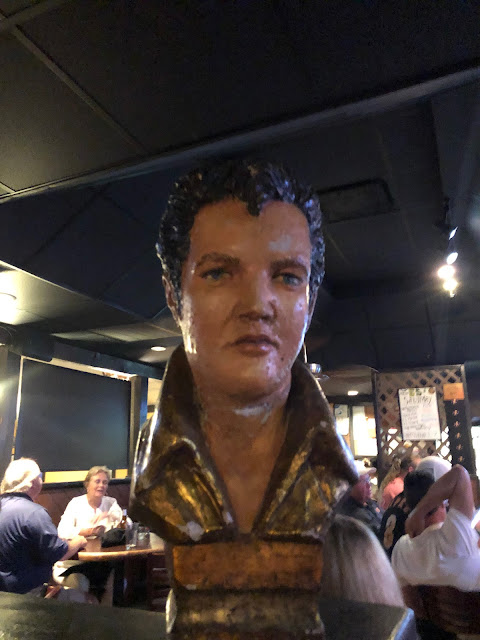 Elvis was there.
And then we drove back to our room in the giant plantation house.
Okay. That's the story. Time to stir the gumbo.
Love...Ms. Moon