As Melania Trump So Famously Said: "Who Cares?" 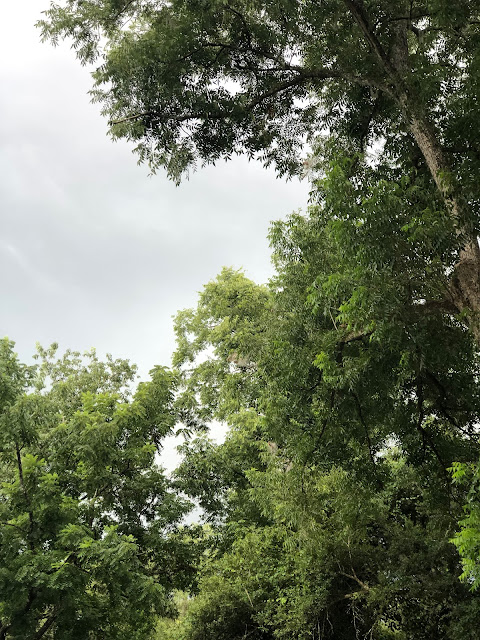 I've been so damn useless today. That picture sort of sums up how I've felt. Angry, a little scary, a living mixture of emotions and feelings, amounting to not much.

I talked to a friend on the phone and spent half the time crying and I hate it when I do that. This friend is so loving and so kind that I can't help but cry around her and she knows I cry and she doesn't worry overmuch about it I think, but it still makes me feel so weak in my weepiness. She says I'm tender, which is a very sweet way of putting it and I know that the older I get, the more tender I become and I don't foresee that changing any time soon.

I suppose I could have canned a few more beans but I didn't feel like it and I could have weeded the garden but I didn't feel like that either even though it's been overcast all day with a few bouts of a mist-like rain that probably didn't even dampen the ground. I did a crossword, the Wordle, shopped for and ordered a dress on eBay, shopped for and didn't buy a purse on eBay, sent two e-mails in response to two I'd gotten, purged my e-mail inbox and trash file, swept the kitchen, moped around, finally settled down and watched another episode of yet another FLDS documentary I've been watching- Preaching Evil.
This of course made me feel so much better.
I also did some seam ripping on a dress that I'd hemmed yesterday and messed up which sounds ridiculous and it is but there you go and here we are- I messed it up. It's a rather cheap dress I got a few weeks ago and it's way too "youthful" for me (What Never To Wear After Forty!) but I like it anyway with its flowy skirt and big pockets. I wear a sort of tank top under it that I tell myself precludes the need for a bra which HAHAHAHA! who cares? It makes me feel like I'm a tiny bit closer to the crazy Bohemian woman I always thought I'd be by this age but which I am not, choosing to mostly wear overalls, at least when I'm home.
Lucky husband, eh?

Lily did something with her kids yesterday that I think was the coolest thing. They went to the Asian Market and bought various fruits which are not usually available in the regular grocery stores. 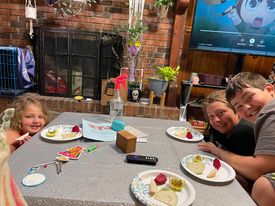 And then they had a taste test. Lily said that the Asian pear came up #1, the prickly pear was last, and the guava was too green.
Looks like the kids were enjoying it.
So. I've made a discovery. Or at least I've changed my opinion about a very important subject- the use of Crisco butter-flavored shortening versus real butter in biscuits and pie crusts.
I grew up with Crisco being used in pies and biscuits and cookies. It just was. As for real butter- I don't even know the first time I tasted it because we always had margarine. I don't think this was unusual for my generation.
Of course I got older and wiser and for a long time now I've used real butter on the table and also in baking. I'm still sure it is superior in cakes and in cookies and when I think of using shortening in them I shudder. However, a few weeks ago I had to substitute some shortening for butter in a pie crust and it was absolutely the best pie crust I'd made in forever. I tried it in biscuits and the result was fluffier and far more tender biscuits.
Most interesting.
Please don't bother telling me that butter is actually far better for us than Crisco. I am aware of that. I am also aware of the fact that anything made with the fat to flour ratio of biscuits or pie crust is going to kill us dead eventually so what the fuck?
And to tell you the truth, WTF has been how I'm feeling ever since the supreme court has started taking away our freedoms and allowing the separation of church and state to become blurred AND is now seemingly set on destroying the planet. What's the fucking point is how I felt about almost everything after Trump got elected and so this is only a renewal and restoration of that.
It is not a good feeling.
But it can lead to deliciousness in the kitchen, I guess.
Another thing I've learned recently is that in the time it takes me to heat my "real" oven to 425 degrees to bake biscuits, I can make the dough for biscuits, shape them, and bake them to doneness in my Easy Bake (aka Cuisinart airfryer/toaster oven) at 375 degrees. I will admit that the tops are a little uneven in their color but so what?
This is dangerous knowledge because the ability to make two (or even one!) fine biscuit in a short amount of time can only lead to trouble.
So what? WTF's the point of worrying about dietary restrictions?
Hopefully, I will get over this mindset because obviously, there are plenty of reasons to give a fuck or a damn. I just can't remember them right now.
Here's what the little yard in front of the original kitchen (now office) looks like right now. 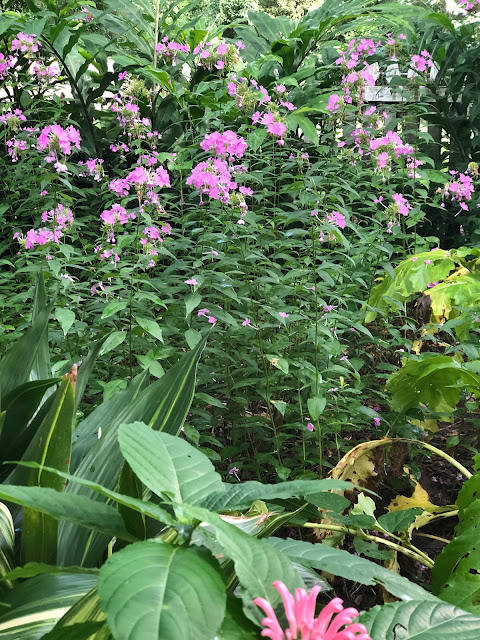 The Garden Phlox has taken over which is fine with me. The Pinecone Lilies are also threatening world domination. I have to admit that I was surprised to see that they are already forming their cones. 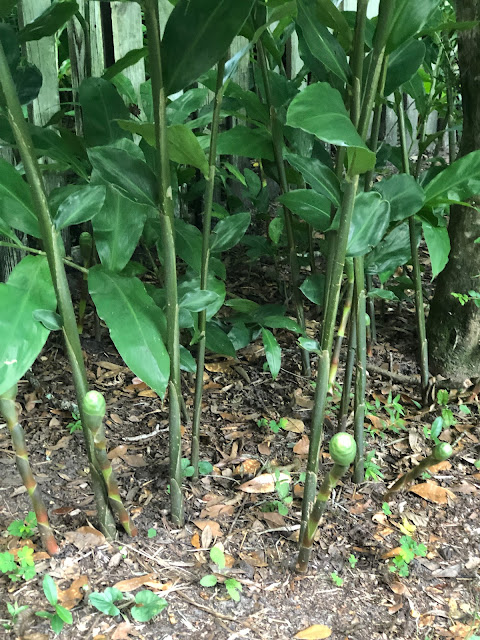 And when I went out to check on the the figs, I discovered that I had a few ripe ones. Just a few. And they are so tiny. 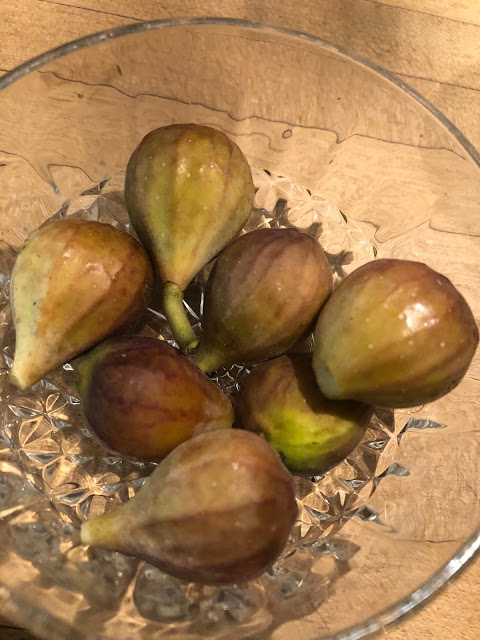 My new goal is to gather enough to make at least one pint of fig and lemon preserves because I love it.
See? I haven't given up on life. I have goals for the future!
All righty then. I've told you everything I know.
Mostly.
Love...Ms. Moon
Posted by Ms. Moon at 6:34 PM