Was I Ever Hell On Wheels? 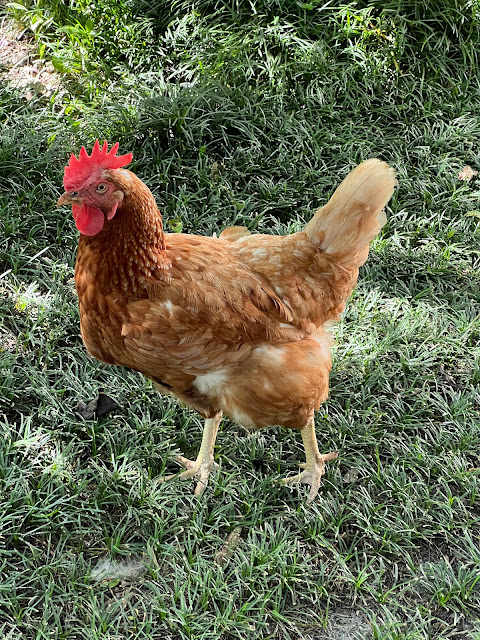 There is Dr. Pansaloony, the Noble Son of Violet. Or, some hen, but most definitely raised by Violet. I look at that comb and waddle and those tail feathers and that drape he's growing there and I am 99.9% certain he's rooster. He's still got those fluffy thighs. I think we may have two hens in the quartet. Not certain. They all have huge feet but possibly that's just a teenager thing.

Another hot day with no rain here in Lloyd. It's 95 degrees right now at almost-six o'clock. Glen and I both worked in the garden today and neither one of us tolerated it for long. It's ridiculous working out there in the full sun. I get to the point where I start to feel a little nauseas and that's when I know I have to come in and cool off. Jessie and Vergil are on their way back with the boys and Lily told Jessie in a text today that they need to turn around and go back to North Carolina because it's too damn hot here. And that, by the way, we'd all be following them up there and moving in with them. Although it has gotten hot up on Black Mountain this summer, it's still going to be a hell of a shock for them to come back to Tallahassee.

After Mr. Moon and I both came back into the house I asked him if he wanted to go to the river to cool off. "It's either that or take a shower," I told him. We debated the issue a bit. On the one hand, it's Saturday which means there would be a crowd down there and also I needed to get laundry off the line and make hamburger buns but on the other hand- well, the river.

So we went to the river.

It was crowded. We put our chairs in the shade and were close enough to the next group over that I could easily eavesdrop which as we all know, is one of my favorite things to do. The best line I heard was from a woman who said, "When I was in my fifties I was hell on wheels!"
And I bet she was. I can't even remember my fifties.

We followed our routine which is to set up the chairs and then immediately get in the water. It was as cold as ever but because of all the people it wasn't as clear and pretty as it usually is. There was a guy who kept yelling at his kids "Don't go over there! It's too deep! You come back here! You get back here right now!"
Etc.
I heard a mom say to her child, "Here, you can have a piece of chocolate if you'll just shut up!"
A Florida Wildlife guy was checking a boat for violations at the dock and many, many water craft of various types were being launched and returning to land. A kid was riding a bike in the parking lot and a Jefferson County sheriff almost hit him pulling out of his space. One guy was grilling hot dogs behind his car in the parking lot on a tiny grill. It was a lot. As Mr. Moon and I were standing in the water taking it all in I said, "Human beings can fuck anything up."
Even as I said it, I was under no delusions that I wasn't one of those humans myself.
But we stayed long enough for two lovely dive-ins and once again, it worked its magic and we came home in a good mood. I still feel cooler and my skin feels softer although it also smells a little river-fishy.
So what?

You know how I said the other day that I am having great waves of flashbacks of memories of being in other places? One of the main ones I'm having is of being in Vero Beach, staying at the beach with my mother, grandparents, uncles, aunts, and cousins. We did this for many years, meeting up there semi-regularly, even long after Granny and Granddaddy died. The last time we did it, Jessie had been born and was generally in a sling on my hip so that was about 1990. It was always so much fun and we stayed at the same two places every time. For the earliest years, we stayed at Sea Cove Cottages which I have spoken of before. 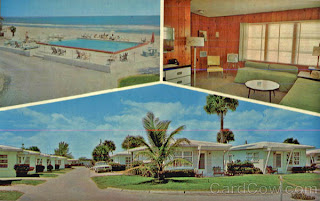 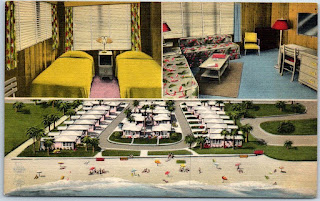 They were of course torn down eventually to make way for giant, ugly condos and so we all met at a place called The Aquarius Motel which I think is still there but under a different name. There was a shuffle board court and outdoor grills and kitchenettes and it was always so much fun. I keep thinking of those times.
On my birthday, my cousin Susie posted a picture on FB that I think I've posted here before but will post again. 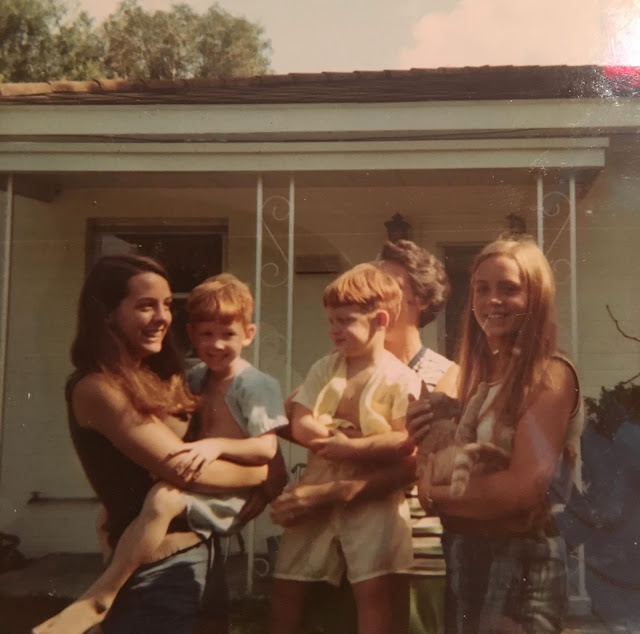 Suzie on the left, holding my brother Chuck, my mother holding Russell, and me holding our cat whose name I do not remember. This was in Winter Haven, probably around 1970 or '71 and even though the picture wasn't taken in Vero, it brought back those beach trips even more strongly.
I yearn to go back.
Maybe we will. Go spend a few days in Vero and then head up to Roseland and spend a few days there. Why not? We're sort of, kind of, maybe retired.
Well, enough of that!
Off to make supper.
Love...Ms. Moon
Posted by Ms. Moon at 6:33 PM