Tomatoes Under Control. For A Day, At Least 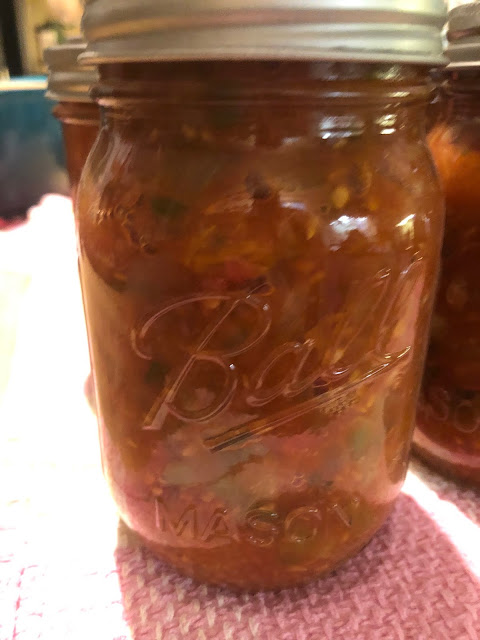 If I was to sell that pint of salsa I think I would have to ask about fifty dollars for it. And that still probably would not compensate me or Mr. Moon fully for the labor we put into the growing of the vegetables, the preparation of the vegetables, the cooking, the jars, the jar sterilizing, and the first degree burns I seem to have on my left hand.
Which is odd in that I am right-handed.

Anyway, I have seven pints of homemade salsa now and if you asked me if it tastes better than commercial canned salsa, I'd have to say...eh, not really. But of course there is that sense of satisfaction I have from having done it and that's worth something.
Right? Right?
The first thing I did this morning was cut all my sun gold cherry tomatoes in half. This took approximately forty-eight hours.
Not really. But an hour, probably.
And then I salted them and squeezed some of the juice out of them and put sliced garlic in with them and roasted them for a few hours. 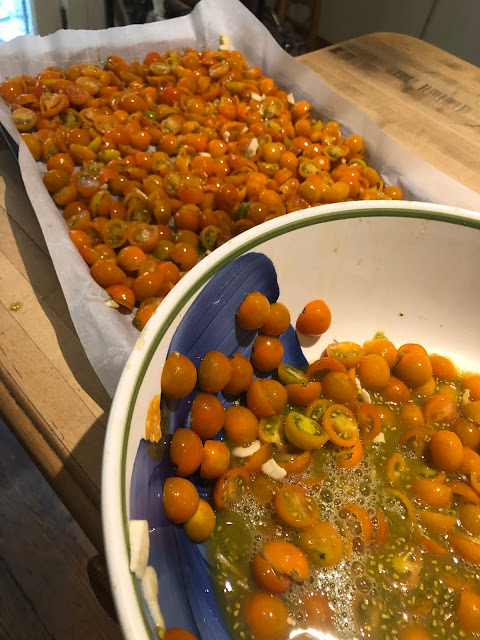 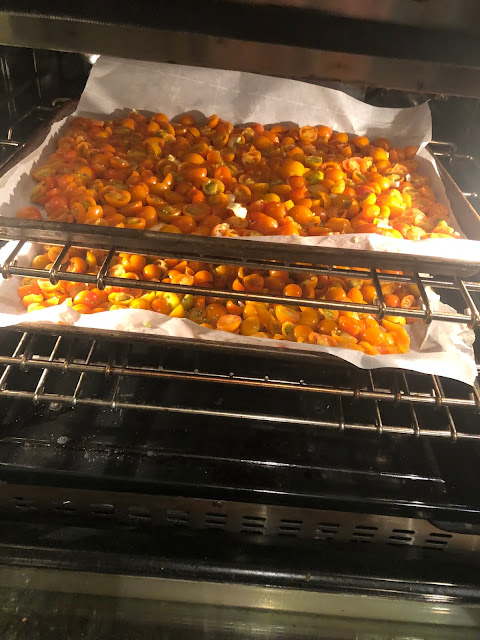 I tried boiling down some of the juice that I collected and that was...interesting. I ended up putting a little bit into the salsa and tossing the rest. It was full of seeds but I'm not picky about tomato seeds. The tomatoes themselves ended up as sweet as candy but of course they all had their skins on them still. Didn't bother me, I added those to my salsa too along with peeled regular tomatoes, chopped peppers of various varieties including some jalapenos that Lily gave me and half of one of those Red Flame peppers and I'm pretty sure that's what burned my hand. Also onions, garlic, vinegar, and salt. I cooked that down for awhile, added a can of tomato paste to thicken it a little and make it a bit redder (all those sun golds gave it a yellow tinge) and then I water bathed it.
And just like that...SALSA!
We will try it tonight on the enchiladas I am making for Owen who is spending the night. He's such a sweet boy. He helped me pick vegetables earlier and he went with Mr. Moon to the dump to get rid of some more stuff from the garage that my husband is clearing out. He helped him unload it. It's such a trip having this boy here now. It's like he grew up in the Year of Covid. He'll be 12 in September and he's almost as tall as I am. When I kiss him on the cheek, there is no more bending down. He is precious to me. My first grandchild, the one who gave me my grandmother name. 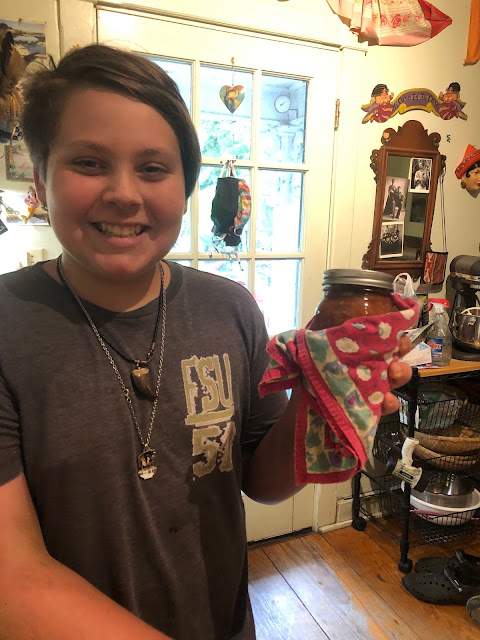 He half grew up in this house and I joke that he knows where everything is better than we do. That may be true. I always want him to feel as if he is home when he is here.
I wonder if he'll let me read him The Little Red Hen Makes A Pizza tonight. He's so sweet that he might.
And I did one more thing today. Harder than making salsa by far. Something I've been putting off for literally years- I made an appointment for an eye exam. It's on Friday and I'm very, very glad that the process has begun for me to get new glasses. Not only do I need a new prescription but the glasses I have are so scratched up that it's a wonder I can see at all out of them. The only reason I've put it off for so long is my ridiculous but very real fear of doctors. I'm almost sixty-seven years old and I cannot for the life of me figure out where this fear comes from and it only seems to get worse with age.
But. I did it.
And I know this sounds absolutely absurd but I'm proud of myself.
And on that note- off to make enchiladas for my boy and his grandfather.
Love...Ms. Moon
Posted by Ms. Moon at 5:36 PM