He Made Me A Mama 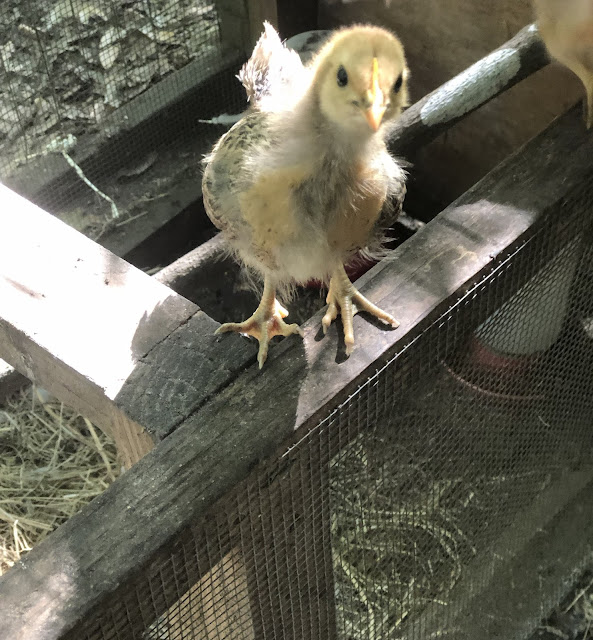 The chicks are now able to get in and out of their little coop where they spend the night with the help of a small branch we put in it for them to climb. They ballet-dance up the stick and then fly down to the ground or in some cases, a few yards away where their mama is. They are growing up. And I am seeing way more tail feathers and combs than I'd like to but what can you do?
Wait and see.
I will point out that this morning the first three out of the coop were the ones with the least amount of tail feathers while the ones with the tail feathers were still peeping around on the ground, trying to figure out how to escape and join the rest of the group. I am NOT saying that the ones with the most tail feathers are definitely roosters and thus, perhaps not as bright as the others, I am just telling you what we witnessed.

This morning we got a call from the Weatherford brothers which was a lot of fun. Jessie had gone for a little hike and Vergil was feeding them their breakfast so they decided to call the Mer and the Bop. They sounded like they'd dined on crack, as excited and happy as any two boys can be. They told us what they want us to bring when we come visit. So far, that list includes the model car they were working on with their grandfather and also the Professor Wormbog book and the Thomas the Tank Engine book about the judge lady who lost her hat. I believe the farm was also mentioned. By the time we load up everything they believe we should bring, we're going to need to haul the trailer. Jessie told me later today that they keep asking why we aren't there yet. Of course, this makes us feel happy and it also makes us a little sad. We miss them. When I asked them what they've been doing they said that mostly they've been playing with their cousins, riding bikes.
Turns out that the bike riding is happening on the wrap-around deck that Vergil's sister and brother-in-law have around their house. Ramps have been built for easy access.

Ooh boy. What fun for Vergil's sister!
But I know they're just having the very best time.
This morning was also all about wishing Hank a happy birthday. We'll all be meeting up tomorrow for lunch at...El Patron! Mr. Moon is probably going to be off fishing so he won't be there but the rest of us should be. This IS our birthday season, well, not counting the one at the end of September where there are about five of us who have birthdays. Mr. Moon's birthday is coming up in a few weeks. I made Hank a cake although I have not made the icing yet and it looks like...well, not my best effort. I am just off today, the main reason being that I took another walk and pushed it pretty hard up the hills of White House Road and it was already 85 degrees when I left the house and I haven't been worth shit since I got home. I swore I was going to mop the kitchen floor today but there ain't no way that's going to happen.
I made a pie crust for a tomato pie and I sure hope that comes out all right. I don't know. I just sort of feel like I'm fucking everything up which of course is not entirely true and even if I am, so what? Forty-five years ago I gave birth to a beautiful baby and he grew up to be someone who has taught me more than I ever could have imagined and I am far from the only one he's been a teacher to. From the moment of his birth he's been a light and a joy to this world, being the unique and wonderful human he is. I remember the day he was born as if it were etched in crystal and tucked away in velvet. I've told the story so many times of how I was in labor for 28 hours at home before I finally gave up and went to the hospital and how I was squatting on the floor, pushing like a beast, while the nurse laughed at me and said, "You better get up on this bed before you have that baby on the floor!" and me thinking, "Who cares????" having forgotten all about the fact that yes, I was having a baby as the effort I had been extending had wiped away anything but the most primitive of thoughts from my brain. Thoughts like, "I want to die now," mainly.
And then- TA-DA! he was born and I'd never been so happy or so enchanted or so thrilled or so ecstatic in my entire life- I had a baby, a baby, a baby! I could have run a marathon! Holding him in my arms!
And we went home a few hours later and I snuggled him in our bed and nursed him, that little peach of a child, and I promised him the moon and the stars and anything else he might want ever in this lifetime and tomorrow I'll be taking him a poorly-made cake but, well, that's life.
It's all a tangle and a tumble and a joy and a wonder and a worry and a tear and a laugh and a confusion and a certainty and a million kisses before it's all over, I guess. Looking back forty-five years and thinking of all that has happened since surely does give me pause and perspective. Pause because- how has it been forty-five years, and perspective because I can see how the things that loomed so large and were so hard turned out to be pretty okay and it's not the moon and the stars that a child needs, it's mainly only all the love you can give them which is the easy part, and the ability to cherish each one in their own differences because by god, they will all be different and if that isn't the coolest thing, I do not know what is.
So Happy Birthday, Hank! I am sorry about the cake. Hopefully the icing will cover up the sins beneath it and at this point in our lives, you know I love you no matter what. A cake is a cake but my love and respect and admiration and perpetual and eternal awe I feel for you does indeed extend to the moon and the stars and back, even if I can't give those heavenly bodies to you.
But I would if I could. I promise.
Love...Mama
Posted by Ms. Moon at 5:59 PM