Back To The Garden 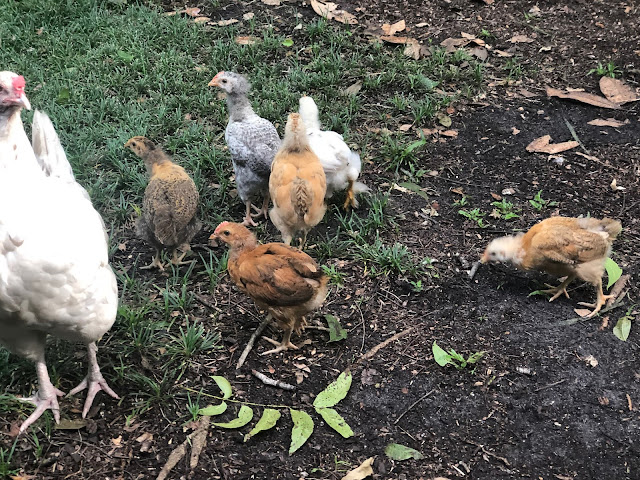 Yesterday Darla brought the bebes all the way up to the bird feeder which is just a few yards from the back porch. I was delighted to see them. I went in the house and got some leftover scrambled eggs from our brunch and sat on the back steps and scattered them and they all came running. They already recognize me as the vertical moving feeder and are not afraid of me in the least although our relationship does not extend to cuddles. Part of me would love that and part of me is afraid to because I know that some of these babies are going to turn out to be roosters and will probably go to No Man Lord for a chicken dinner and if I've named them and loved on them, it'll be just that much harder. Honestly, if roosters didn't cause so much trouble and consternation (and actual physical damage) among the hens and if they didn't challenge the alpha rooster, thus causing him to have to divide his attentions between watching the flock and watching out for sneak attacks, I would not mind at all just feeding them and having them around. But once the little roos start with the hormones and the crowing and the chasing of hens, there is just no kum-ba-ya energy strong enough to undo what eons of evolution have done.
And for a good reason, I might add.

Anyway, that was interesting. After a few minutes, Jack came out the cat door and sat beside me and Darla sensibly called her chicks to her side and they hustled underneath a table. I'm here to tell you that when a mama hen says, "Come here!" her babies don't stop to argue.
Jack couldn't have cared less about the chicks. I'm so glad my cats are not a threat to my chickens.

I had a very hard time getting out of bed this morning. It was gray and raining off and on and I was so sleepy. At least I felt sleepy. I finally crawled out of the covers and got my day started. I decided that I needed to attend to my produce preservation again and got out the pressure canner Lily loaned me after I picked another huge basket of beans. Turns out that there are two parts that were missing and so I sighed and got out the regular canner and pickled seven pints. 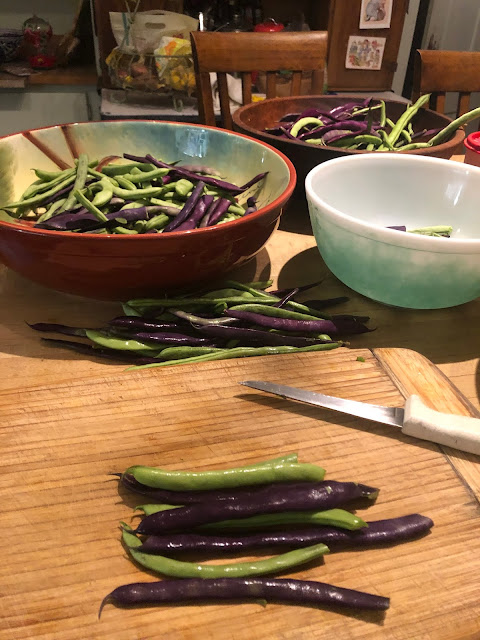 I wash the beans and let them drip dry on a towel while I fill the canner with water, wash jars and set them in the canner to boil and sterilize. I put the lids and bands in another pot and bring that almost to a boil and take it off the heat. I snip the stem-end of the beans and then cut them into a good length for a pint jar and and put the leftover bits in another bowl. This takes awhile as we are obviously talking about hundreds of beans. When that's all done I make up the brine for the pickling. Vinegar, water, salt, and sugar for these. I bring that to a boil and by then all the jars have been boiled for at least ten minutes and I take them out of the canner and set them on a clean cloth and then fill them with the beans which is somewhat like doing a puzzle, fitting in as many as I can without squishing them or breaking them, leaving enough room at the top for a garlic clove and dill seeds and mustard seeds and whatever other spices I feel like using. Today I used some crushed red pepper flakes. We are growing a type of pepper I've never grown before called a Red Flame and I picked one the other day. They look like overgrown cayenne peppers- long, a bit wrinkled, skinny, red. I looked them up and dang if they're not hotter than habaneros on the Scoville scale which is a measurement of the hotness of peppers based on the amount of capsaicinoids they contain. In fact, they would appear to be almost as hot as ghost peppers which means- WHY THE FUCK DID WE PLANT THESE? I thought about making teeny tiny slices of the one I'd picked to add to the pickled beans but decided not to. For one thing, I don't have any cooking gloves and if you've ever cut up hot peppers and not used gloves you know what I'm talking about. Accidentally touch your eye and you could burn your retinas. Not to mention that your fingers can burn for hours no matter how many times you wash them.

But. Moving on. After I pack the beans into the jars, using the snips I'd saved to fill up spaces which are too small for whole beans and filling a jar with the rest of the snips to can and use on salads, I pour the hot brine into the jars, making sure to cover the beans, put the clean lids and bands on them, and put them in the canner. 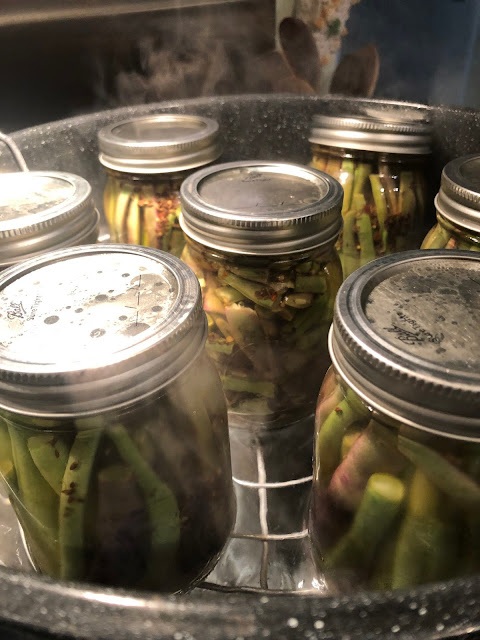 I bring the water back to a boil and then let them boil for about another ten minutes, take them out, set them back on the towel to cool, and hope to hear them all pop, which means they have a good seal and can safely be stored on a shelf for at least a year or two.
And all of the ones I have done today have indeed sealed.
Success!
I've picked another huge basket of banana peppers and cherry tomatoes as well as a large pineapple tomato. This is a new one for us and they are quite pretty. 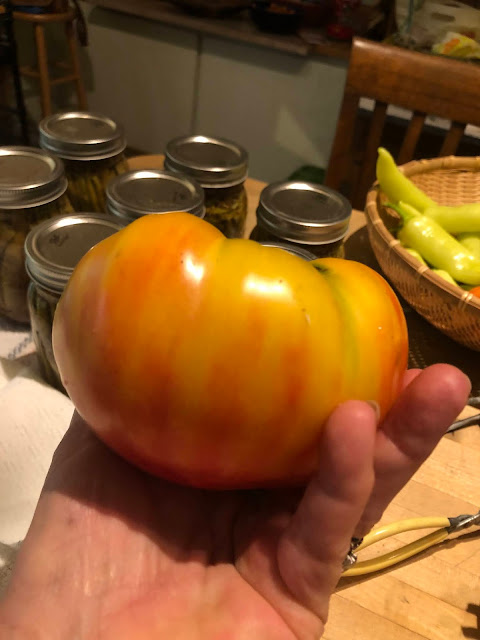 Perhaps we will eat that with dinner.
Tomorrow I absolutely must figure out something to do with all of my cherry tomatoes and the regular sized ones too. I am thinking salsa. I have read about roasting the cherries but that requires a lot of fussy prep and I'm not sure I'm up for that. I'll figure out something.
Here's what else I picked in the garden. 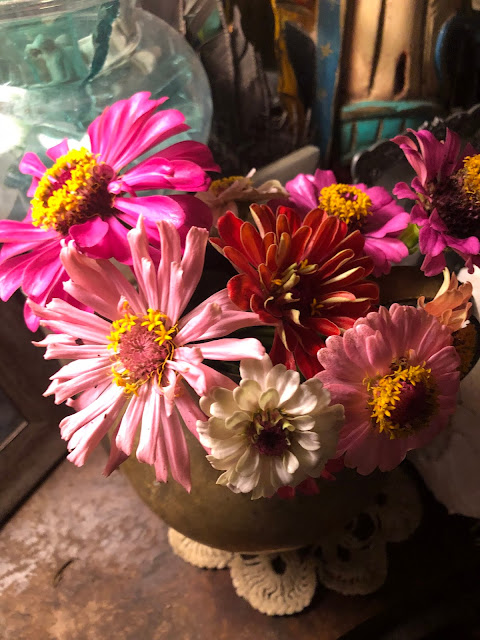 You have to love a man who plants zinnias in the garden for no other reason than that his wife loves them.
And I do.
Love...Ms. Moon