Not A Rant, Not A Sermon, Just A Monday 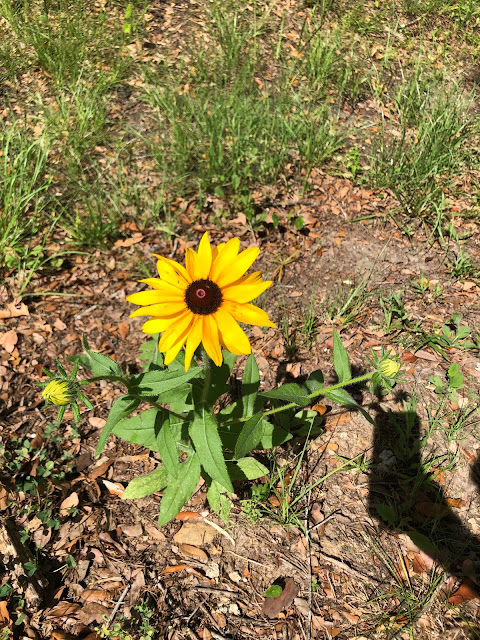 This sweet little black-eyed susan was standing all by herself on the side of the road when I took my walk today. Despite its status as a lonely thing, it cheered me with its defiant golden stance for life.

The walk did me good even though when I got home I was as hot and red as a cayenne pepper and not hot in the good sense, either.
I saw Pinot, sitting in the shade next to the RV which is next to the house that burned down. He called out a greeting and I returned it. He is a friendly man, that Pinot. I passed No Man Lord but he appeared to be asleep in a chair, slumped over another chair. I can't imagine he sleeps well in the shit-beat RV he lives in. There are no screens and it must stay so hot in there. Right now his yard is filled with aluminum cans. There are what appear to be thousands of them and that may be true. I imagine that someone donated them to him to sort and sell. I can't think of any other purpose they might serve and Lord knows that no one person could have drunk all of the beverages they held at one time.

Here's a picture of a blooming elderberry I took. 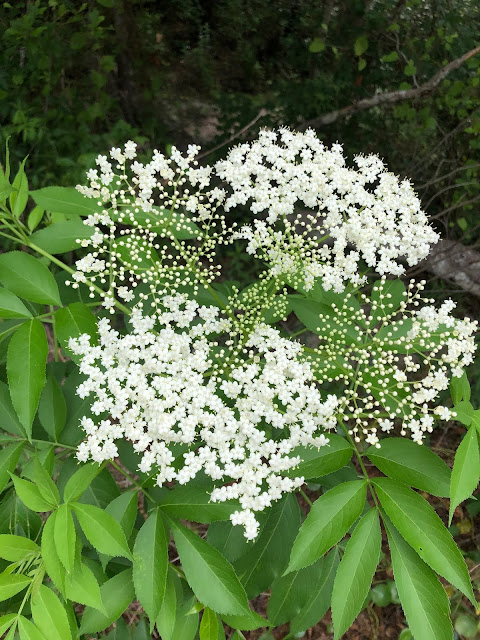 The flower is so beautiful but every part of the plant with the exception of the ripe berries are toxic to human. They grow like weeds around here. I guess they ARE considered weeds, actually.
So I tried the peppers and cherry tomatoes today. Let me just say that although the cherry tomatoes had a nice flavor, their consistency after being processed in a water bath is not worth the trouble. I imagine I can mash them up and strain them for a salad dressing or a sauce of some sort but just eating one straight out of the jar is an unpleasant experience due to the mushy texture.
Well, it was a fine experiment.
The peppers are not crisp either but they are far more palatable. They will go well on sandwiches, in salads, and on pizza.
Lily and I had talked about meeting for lunch today and we did. We went to a Mediterranean restaurant that had the cojones to open during the pandemic. I wasn't even aware of its existence but Lily had had take-out from them before. It's in a part of Tallahassee that I am quite unfamiliar with- a part that up until about a decade ago was nothing but fields and pasture and forest. Now there are housing developments and businesses including a Publix.
The lunch was good. The little Greek salad that came with our meals was just about the best thing I've eaten in over a year that I did not cook. Such a simple thing but so good. We had falafel and chicken, hummus, rice, and dolmades. And that salad.

After lunch I visited the Publix next door. It's always a tiny adventure to go to a different Publix. Each one is very similar to all the others and yet, different too. This one had a much richer selection of Hispanic foods and a slightly different set-up than "my" Publix which is how we all refer to the one we shop at the most which of course we all know like the backs of our hands. But they are all Publix and the employees are all friendly and my check-out lady had a beautiful sleeve of ink that I could not help but admire. She also had perfect, polished nails and wore several rings and bracelets, all of them quite dainty and lady-like. This was not some biker babe, but a woman who loves decoration.
At least that's how she presented.

And so I have my shopping done for the week, hopefully. I came home to find my husband still working at a project he started a few weeks ago which involves cutting back the azaleas to a startling degree and pulling many of the Chinese rice-paper plants that have taken over part of the yard. Those things are hell to pull because no matter what season you do it in, they release a pollen or a dust of some sort that chokes the human sinuses and clogs the throat and causes a cough. Miserable, in other words. I don't know how he's managed to do all of that work in this heat. I thought I deserved a medal and commendation from the queen for walking for half an hour and that was still relatively early. His efforts have revealed an entire field of crocosmia which I need to pull. The yard looks entirely different there now with the azaleas cut back and naked, the jungle tamed.
That man knows how to work.
The azaleas will grow back. As will the damn Chinese rice-paper plant and the crocosmia if indeed I do get around to pulling them.
This is life and the constancy of it. Most of what we do is not of the "one and done" sort of task, whether we're talking about yard work or gardening or laundry or cooking or cleaning or changing diapers or doing sit-ups. I wonder what it must be like to have a life where one earns their bread with sculpting or painting or writing or building houses or highways. Of course after Michelangelo finished The David, he did not give his sculpting tools and blocks of granite away but went on to create more beauty with them. Still, he had that finished statue, proof of a job done, set literally in stone. Tolstoy did not go to bed for the rest of his life after he wrote War and Peace but by god, he had something quite real and palpable, not to mention thick, as a result of his efforts. Women especially, I think, have been relegated to the tasks which are of the more repetitive kind but those tasks are absolutely necessary for the living of life on earth. And men do some of them too.
Like my husband and the azaleas.
But I completely understand his desire to restore cars and build things, to have something of substance and value to show for his efforts.
In the meantime, I need to go make a supper, and no matter how good it is, after it and its leftovers are eaten, it will hardly be a memory in the vast history of all of the meals I have prepared in my life.
But that's the way it is.
Love...Ms. Moon
Posted by Ms. Moon at 6:08 PM