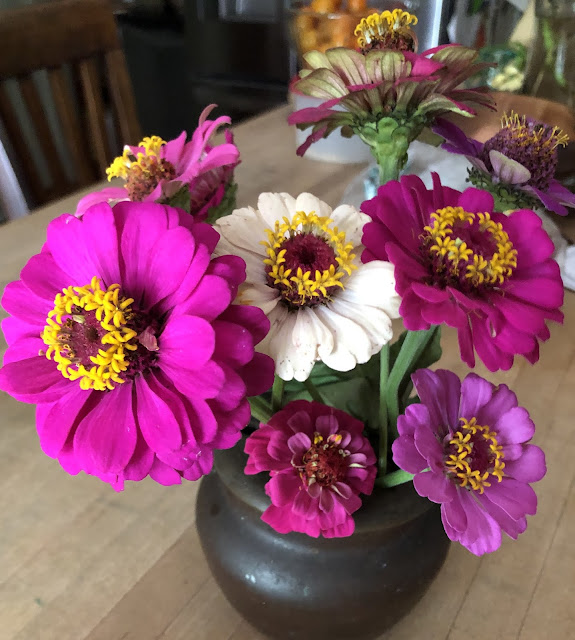 Well, another Sunday has almost passed and the survival rate here at the Moon home is 100% so I guess we're good. Neither one of us has done anything very exciting but as I said to a friend the other day, no one's in jail or the hospital so we're good.

My bread last night was actually terrific and that's got me thinking. I've have been so ridiculously rigid about my sourdough baking. I feel like I have got to stick to the rule of using nothing but flour and grains, starter, water, and salt.
But why?
I have no idea. For awhile I was putting in about a teaspoon each of milk and sugar and that resulted in a softer, loftier loaf but I felt guilty. Like- there's a sourdough god who was looking down at me with deep disappointment. Like the sourdough police were gonna bust into my house and slap me in handcuffs or at the very least, issue me a summons. Like I had peed in the holy water font.
And I'm the one who always laughs at the the comments of the NYT's cooking app recipes that ask things like, "I don't have any shallots. Can I use a leek instead?"
OF COURSE YOU CAN!
"I only have anchovy paste, not anchovies. Will that be okay?"
FUCKING A, YES!
"I have no fresh dill. Can I substitute dried dill?"
WHY THE HELL NOT?
Of course I also make fun of the people who take a recipe and replace almost every ingredient with something else which essentially changes the entire dish and then bitch because it didn't come out very well. And I am completely disdainful of the recipes (not necessarily in the NYT's) that call for starting sourdough on a Wednesday if you want to bake it on Sunday, doing everything to the dough except dancing the tango with it in your bra.
"Forty-eight steps to perfect sourdough bread!"
I am not a recipe purist by any means whatsoever. So why in hell am I so loathe to fool around with the sourdough?
I think I have proved by now that the starter I made with the wild yeast of Lloyd will indeed lift a loaf of bread. So why not get jiggy with it?
And last night's loaf that had the leftover mashed potatoes and parmesan cheese in it was soft and airy and delicious. 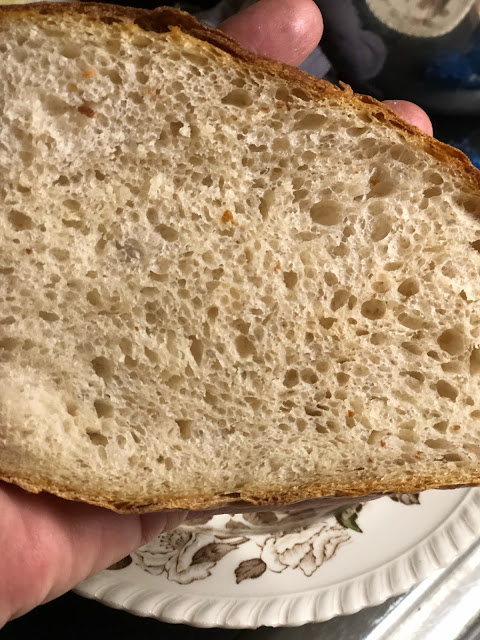 Anyway, what in hell was I talking about?
Oh yeah. Sunday. I watered all my porch plants and did some laundry and finished a crossword and started another. And then I put on my overalls and went outside to where all those damn Crocosmia are, with my trowel, my garden cart, and an old canning kettle to put the pulled plants in. This is what it looks like out there now since Mr. Moon trimmed all the azaleas and pulled up the Chinese rice paper plants. 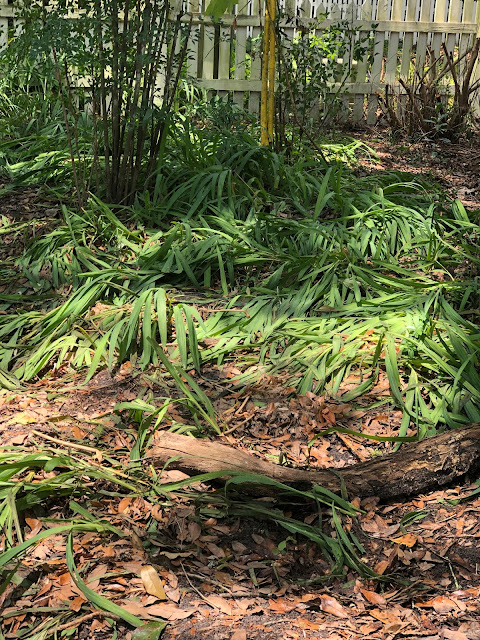 Attractive yard feature, right? And I'm trying to dig up all the dirt around the ones I pull because there are so many corms that I could probably dedicate the rest of my life to trying to pull them all and it would all be for naught. But one must try. When I met the woman who lives across the road the other day she asked me what the plants in her yard are that are taking over under a beautiful old oak that she has. And guess what?
Croscomia.
I told her to pull them. Hers aren't going to bloom either because they're shaded by the tree. And I warned her not to throw the plants she pulls somewhere else in the yard because they'll just take over there.
While I was pulling, I did discover lots of lovely earthworms and also bricks and flat rocks. There may be an entire patio under there or something. A stable floor for all I know. I never have any idea what I'm going to dig up around here when I put my shovel or trowel in the ground. How I would love to have pictures from each decade of this house's life, of both it and the yard around it!
I am thinking that we should transplant some of the camellias in the backyard to that space in the front. I planted them too close together and they are crowding each other out. Rookie mistake!
I know better now.
So I got hot and sweaty and filthy and I've had a shower and Mr. Moon is working in his beautiful garden. It is truly a thing of beauty. I just gave another neighbor a dozen eggs and some cherry tomatoes and banana peppers and a jar of this year's dilly beans and a jar of last year's bread and butter pickles. I'm going to cook some snapper tonight and heat up the rest of the tomato pie. I might make some cole slaw with the last small head of cabbage I pulled the other day.
I sure do spend a lot of time pulling things out of the dirt, don't I? And I generally have chickens around me as I do that, scratching, clucking, and talking about what my uprooting has revealed, as well as a cat or two who come around with their judgmental attitudes and concerned expressions. 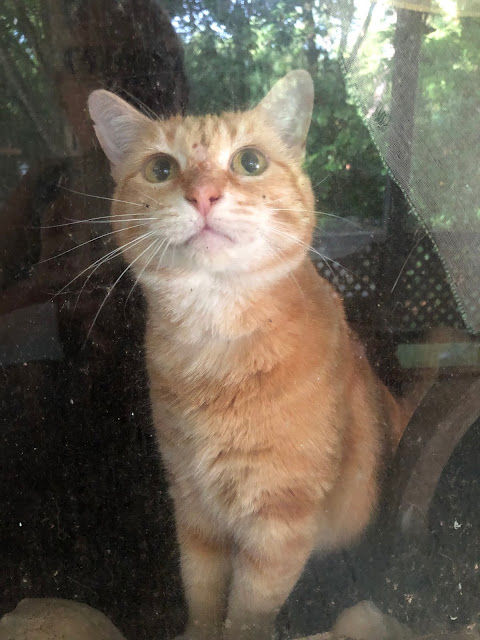 Maurice worrying about me from the dining room table as I sit on the porch. I love how she taps on the glass to get my attention. I should probably wash that window. And believe it or not, she has been far gentler and less bitey and grabby lately. Knock wood.
Not a bad life. Not a bad life at all.
Love...Ms. Moon
Posted by Ms. Moon at 6:25 PM