Cannot Complain Nor Will I 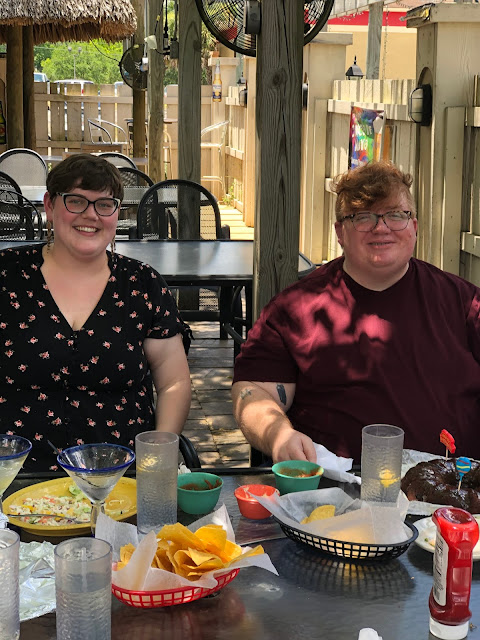 I drove to town today with a bagful of green beans and cherry tomatoes, a few squashes and three dozen eggs to give to the children. Also, the cake.
Man. That cake. Not only did I forget to put salt in it, I forgot to put an egg in it (I told you I was a mess yesterday) and because it was a very dense cake to begin with with apples and prunes and raisins and nuts, it was somewhat brick-like but I had made a sort of salted-caramel icing for it which compensated and it was fine. Not a fluffy cake in the least but a flavorful one.

I met up with Hank and Rachel at El Patron but dammit! someone else had a birthday and they had the entire patio taken up with their carefully and cheerfully laid tables with tablecloths and decorations and even little bottles of Purell laid out like party favors.
No room for us.
Then Lily remembered that there was another Mexican restaurant down the road with a patio so we texted everyone and moved the gathering to that place and it was nice, sitting under a giant lime or lemon tree or some sort of citrus tree and although it was a bit humid and hot, no one collapsed from heat stroke so...winning!

We sat around the tables and ate and chatted for a long time. Everyone told stories about bugs. We took turns. Since we live in Florida, everyone has a bug story or two. The one Lily told about what happened to her just last night was a classic example of TOO MUCH NATURE and involved a giant spider whom she rescued and opened the door to let out at which point a giant Luna Moth flew in and batted her about the face with its massive wings while she tried to get it back outside without hurting it. We all laughed a lot.
I have to say that the food was not impressive. Not nearly as good as El Patron's but it wasn't really about the food, was it? It's the sort of "Mexican" restaurant where they serve ranch dressing with the chips which I had never seen before and which disturbed me greatly but the salsa was pretty darn good. Our server was good at his job although he seemed rather cranky but he cheered up when he saw the tips we left him. One thing you can say about our family is that we tip good, every one of us having worked in the service industry at one time or another. Well, except for the children.
Here's what we looked like today. 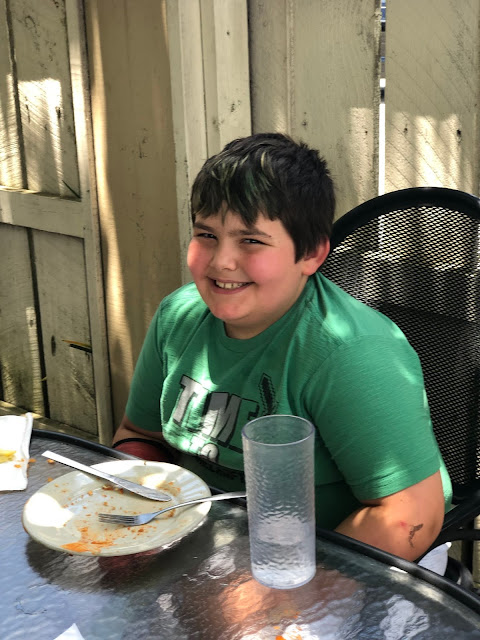 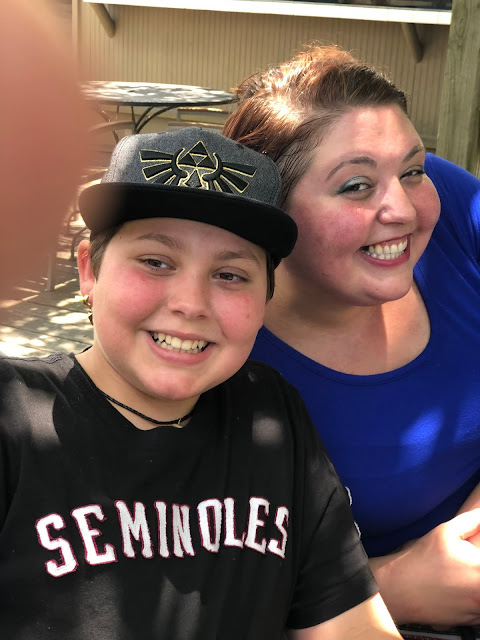 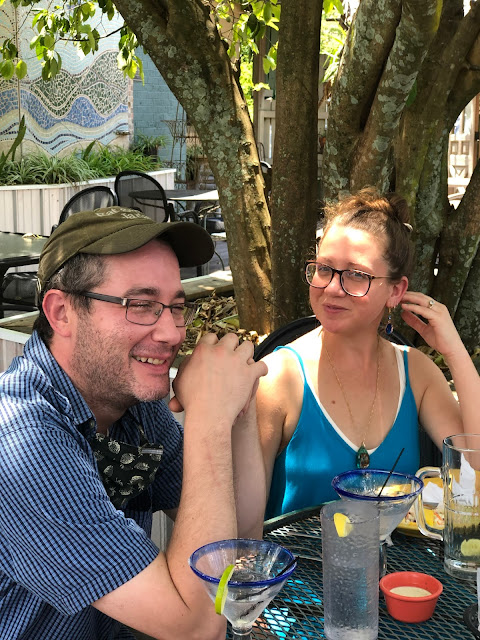 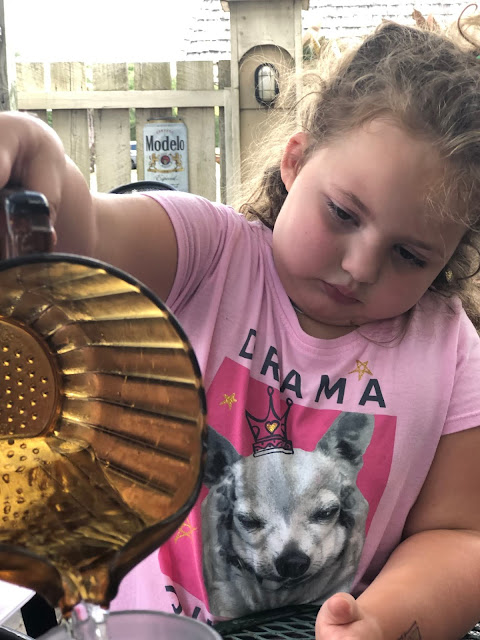 Ms. Magnolia June was pouring me some water. She is good at pouring water and didn't spill a drop. She, too, may be in the service industry one day. It's an honorable profession.
After the cake, we all gathered in the parking lot and I gave out vegetables and eggs and Rachel gave me the box of jars she'd bought at Walmart and Lily loaned me her pressure canner. Man, that thing is huge! After many hugs, Hank and Rachel and I stepped over to the Goodwill which was next door. We perused a few racks and shelves. Rachel got a dress and I bought yet another Revere Ware pot which looks to be at least as old as my grandmother's Revere Ware which I use all the time. I wouldn't have bought it except that it IS the old, heavier, sturdier kind and also, it's a different size than any that I have. I do believe it'll come in handy for a lot of things.
I ran through Publix after that, grabbing a few things that I needed and picking up a prescription of mine. When I got home, it was starting to thunder and while I was unloading the car, a standard-sized poodle suddenly appeared in the yard sniffing after one of my chickens. I yelled at it but the dog didn't seem to have murder on the mind and I approached it. She was well-groomed and really lovely and then I saw her human across the street who was calling her. Turns out the lady is a new neighbor who bought Ms. Pat's old house and before I knew it, she was telling me all about taking care of her 95-year old aunt and how really, she just felt like she was done and she needed her own life although she loves her aunt and is trying to figure it all out. Her aunt lives in Tallahassee and the woman hasn't been able to spend much time at all in her new home. She apologized about a dozen times for the dog coming into my yard and I kept telling her it was all right and finally I had to say, "Well, I need to get my clothes off the line before this rain comes," and I made my leave and did indeed get the laundry off the line. The woman has moved here from West Palm Beach and says that there are just too many people there now. I told her that she wasn't going to have that problem in Lloyd.
God knows that's true.
And here I am, the storm has mostly passed. We got a good amount of rain in a short time with lots of lightening and thunder. Even the little bit we got a few days ago has greened everything up so beautifully. It's funny how you can run the sprinklers on the garden all day and it won't do as much good as an hour's worth of steady rain.
My husband's been out snapper fishing again and he's let me know that he's safe. I don't know if he's coming home tonight or not but either way, I'll be fine. In a way, I feel better if he spends the night because I know how tired he must be after getting up way before dawn, fishing all day, and then cleaning fish and the boat before he makes that long drive home.
I'm grateful for this day in which we gathered to celebrate our Hank, that we all told stories about bugs, even the children, sitting under the shade of a citrus tree, laughing and being ourselves. I'm grateful for the rain and I'm grateful that my husband has been able to go out on the Gulf which he loves to do so much. I'm grateful for the last batch of pickled green beans I made which I have sampled by stabbing some and putting them in my martini. They are very nice, spicy and a little bit sweet. I'm grateful for the leftover tomato pie in the refrigerator which turned out to be absolutely delicious and which will be my dinner tonight and I'm grateful for the prospect of a good shower tonight before I get into my bed with its clean sheets which I am also grateful for.
I am NOT grateful for the fact that I didn't get my kitchen floor mopped but as GOD IS MY WITNESS! that will happen tomorrow. If that's the only thing I do, I'll fucking do it.
At least that's my plan.
Happy Friday, y'all.
Love...Ms. Moon
Posted by Ms. Moon at 7:01 PM