WHOA! (Warning: Many Run-On Sentences Ahead) 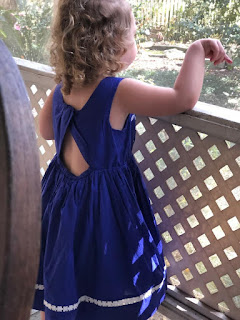 I've been busy today doing little bits of this and little bits of that and taking care of Maggie and then her brothers this afternoon because Jason and Lily's schedules overlapped and I happily stepped in and helped. That's the purple dress that I bought Maggie the other day and I did take a picture of her in it that shows the beautiful embroidered front but I did not realize that I was also taking a picture of a toilet and even I have my standards.
(Is that a pun? Isn't there a Standard plumbing fixtures company?)
Anyway, I also worked on August's dress and did other household chores and the guy who fixes stoves came by and changed my life, I'm sure, by fixing my simmer burner which for about the past six months has not worked. He's got that thing lighting and set so that it'll go so low that as he said, "Butter wouldn't melt off paper over that."
I'm so happy.

Maggie and I played some cards in a sort of game. She's so damn funny and cute. She gives me this look with wide open eyes and a round mouth and says, "WHOA!" I mean, she's freaking adorable. In that picture she's looking at the train which is passing by. "I want to ride the train," she told me.
"Right?" I said.
The other day she informed me that some trains have seats on them for people to sit on. "You ride the train with me?" she asked.
"Oh, Maggie. That would be so much fun!"
And it would.

She did not want to leave the house but we had to go get her brothers from the bus stop and I told her that I'd take them all to a little store where they could each buy a toy. I was talking about the Bad-Girls-Who-Get-Saved-Jesus thrift store, of course.
We drove to the bus stop and she fell asleep before the bus got there and the boys were so excited to see me and then when I told them we could go to the thrift store they were ecstatic. Gibson had a riddle book and the whole way there he read riddles to us and we tried to answer them.
"Why did the pony gargle?"
"Because he was a little horse."
"Which animal always knows the time?"
"A watch dog."
Etc.
I was so proud when I knew the answer.
But I was a lot prouder of Gibson for being able to read the riddles. He's a very good reader.

The kids each picked out a toy at the BGWGSBJ thrift store which was fun except for the fact that there was a creepy-looking guy there wearing a silver cross around his neck who appeared to need to shop for toys at the same time as my grandchildren. I went into extreme Grandmother Bear mode and did not even avert my eyes from him. WTF, people? Goddam.
But they got great toys. Gibson got some sort of kit to make different animals with things I can't even describe and Owen got a completely new, sealed Power Rangers Mega Block kit to make a Power Ranger. Or something. And Maggie got an eight pack of unopened, still-in-the-box Play Dough.
SCORE!
I drove them back to their house and Gibson read us some more riddles.
They all got into their toys but a problem arose when Maggie decided after about ten minutes of Play Dough time that she wanted to play with some of the pieces of Gibson's kit. She'd only slept for about fifteen minutes and she became inconsolable and despite everything I did or said she would not stop wailing so finally I told Gibson to PLEASE SHARE! and he did but then he started to cry and it turned out that Maggie didn't want to share, not really, she wanted the whole thing.
So now I had two kids crying and Gibson undid what he'd made and said, "Maggie, you are making me do this!" and I said, "No, you're choosing to do it yourself," and Maggie was crying in the other room and I finally just said, "Okay, y'all do what you have to do," and eventually Maggie stopped crying and started playing with a baby doll and Gibson went back to making his animals.
And then Jason got home.
By this time no one was crying and they all gave me hugs and kisses and I drove home and here I am.

I think I'm going to sleep really, really well tonight.
I hope you do too.