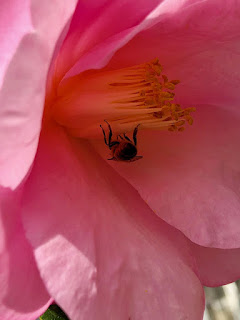 That is not a good photo, obviously.
The bee is in shadow but it was the best I could do this morning. I wanted to grasp the stem of the camellia and tip it up towards the light but I did not dare to touch it lest I disturb the bee who was so industriously making love to the blossom in the privacy of that deep, shadowed pinkness.

I was not industrious at all today. In fact, I slept for an hour and a half this afternoon on a bed that didn't even have a sheet on it. Last night I bled from a healing burn on my forearm I'd gotten a few days ago while pulling a large sheet pan out of the oven.
Chef scars. We all have them. Even if we're not chefs.
Anyway, it was just a little blood on the bottom sheet but I was gathering laundry and threw that in with it and when I laid down on the bed, I pulled the duck up over me and did not care a bit that I was lying on the mattress cover which is rather soft in and of itself. Jack was already napping there and he moved to my side and rested his body against mine and we slept hard. When I woke up I truly did not know what time of day or even year it was. I had surrendered to sleep entirely.

It was so nice, having Jessie and the boys here last night. After we got the children to bed we had martinis and ate our own supper and watched a show on Netflix about huge, crazy houses and the two we saw were made of concrete and steel and they were horrible, horrible and I would much rather live in a cabin in a state park than one of those things. Or maybe even a tent. If it was a nice tent. It's called "The World's Most Extraordinary Homes" and yes, they were extraordinary but not in a good way. The two people who host the show kept saying things like, "I love the way that they have created this intimate space within all of this industrial design," blah, blah, blah. What a tribute to the saying Just because you can doesn't always mean you should. At least in my universe. But still we enjoyed making fun of this bullshit while we ate our eggplant parmesan.

August slept well in our room as he always does and when he woke up he slipped out without us even knowing but soon he was knocking on our door. He wanted his Boppy to come and watch TV with him. Boppy did just that and I got up and started making waffles and bacon. While I was cooking, Levon, who is notoriously shy of almost everyone including his grandfather, went up to the big chair where Boppy and August were sitting and raised up his arms and snuggled in with them. He could not possibly have made Glen happier. 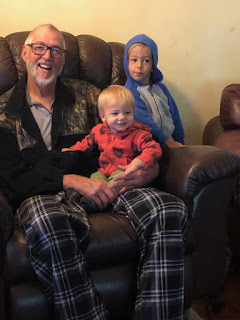 He's slowly coming around to letting us all love on him.

Every time I make waffles I think about how once, when August was quite small, we were in Asheville and had gone to a restaurant for breakfast and August was starving and in his tiny little baby-boy voice he told the waiter, "Waffies. Please." He was so plaintive. 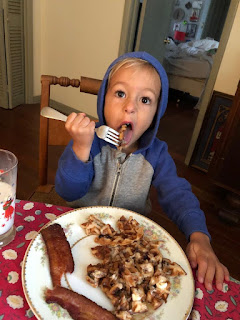 He ate every bite on that plate except for some of the bacon.
Waffies still rock the child's world.

After breakfast Jessie packed things up and she and her babies and Mr. Moon headed out to a soccer game of Gibson's. I stayed behind and leisurely cleaned up and did laundry and tackled the junk drawer.
I only really have four drawers in my kitchen. Two of them are in the kitchen island and one holds silverware, the other random knives and cutting implements including the pastry cutter and knife sharpener and crab crackers. In other words, another sort of junk drawer. I keep the utensils I actually use in various jars and pitchers beside the stove and on the kitchen island, and the knives I use in a knife holder on the island too. One of the other two drawers in the kitchen holds aluminum foil and plastic wrap (which I am truly trying to use less of) and wax paper and it did hold rubber bands and the canning funnel and the small regular funnel and a small strainer and the drawer is not big and things were always getting stuck and this morning I said, "This thing is going to be the death of me!" With vehemence.
And finally, the last drawer is the junk drawer.
So. I cleaned it out. We have enough batteries to light up many nights and those stayed although they are now all contained in bags instead of just rolling around randomly. I made a donate pile in which the set of steak knifes has gone. Steak knives? Really? Also going away are about twenty shish kabob skewers. Did I go through a shish kabob phase? Why? When? I threw out some telephone cords. You know- real telephone cords? One end plugs into a phone and the other end plugs into the wall where the phone line comes in? Remember those? I discovered I have many, many boxes of matches and one matchbook from The Stardust casino in Las Vegas which is now gone. I'm holding on to that for posterity. I threw away instruction booklets for appliances we no longer own. I got rid of other items in there which were just holding space and gumming up my life and was thus able to put some of the stuff from the aluminum foil drawer in the larger drawer and so my life will now be better and will spark more joy.
Please. I do love that phrase. I'm using it a lot in my mind.
Tomorrow I may attack the knife drawer. I hope it doesn't attack me back.
Perhaps I can slowly take control of my kitchen, my closets, my life. I know I've vowed and sworn to do this before but hey! This could be the year!

The guy who lives next door has band practice at his place tonight. I have to say that his band has improved a small, tiny amount from a few months ago when I was finally at the end of my rope and went over there and knocked on the door and told him I JUST COULDN'T TAKE IT ANYMORE!
Not a whole lot of improvement but some. And I can tell they're practicing on the other side of the house. Still. I could live without it.
Other than that, all is peaceful here in Lloyd and Mr. Moon should be returning soon from an FSU basketball game. He's been busy all day. After Gibson's game he took Owen shopping for baseball cleats and basketball shoes.
He's such a good grandfather.
And Owen has feet like a St. Bernard puppy. 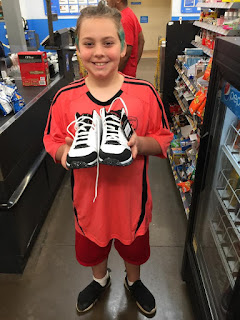 I think I'll go make a salad. And there is silence from next door. Hopefully they're getting so stoned that they won't be able to play anymore although having known way more than my share of musicians, I know that that is not really possible.