Hey! You Look Familiar To Me! 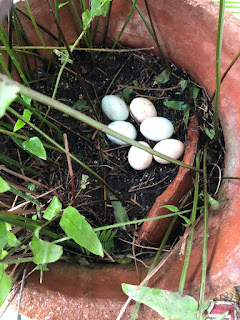 It has been a most interesting day. I started out by making another NYT's recipe, this one for black bean soup and it is still simmering. I was startled at the claim in the recipe that the beans would be tender in an hour or two. In my experience, black beans take FOREVER to cook and this has proven true for me today. But I've had fun with it, as I do love to cook. I have some focaccia rising and I'm going to bake that with the tomatoes I have roasting and thawed pesto that I made with arugula last summer and mozzarella. It all sounds good to me although it will be hard to beat last night's supper which was pork chops and sweet potatoes and homemade warm applesauce and roasted broccoli.
I'm tearing it up in the kitchen these days.

I had just gotten my soup all assembled and in the crock pot when I heard cars pull up so I went to the door and there was a woman standing there. She was probably in her fifties, very nicely dressed with make-up applied, and she said, "You look familiar to me. Is Bea here?"
Well. She did not look familiar to me and there was no Bea here and I informed her of these things.
Nicely.
I then noticed that two other similarly well-dressed ladies of about the same age with salon coiffed hair and jewelry had gotten out of another vehicle and were walking up to the porch. The lady I'd talked to yelled at them, "I GOT THE WRONG HOUSE!"
I wish I could give you an idea of what their accents sounded like. Perhaps it could be described as Southern Sorority Girl Grown Older.
Then the lady at the door started apologizing so inappropriately profusely that I realized she was drunk! At 11:30 a.m.! And then, when the other ladies started really talking, I could see that they, too, had been enjoying adult beverages. One of them kept going on about Liberace who was strutting his stuff in the kitchen garden. I offered her a rooster and told her I'd throw in a hen if she took one. Turns out she has a house on St. George Island and said that she'd love to keep chickens there.
Repeatedly.
The third lady said, "Farm fresh eggs! We could name them Bonnie and Clyde!"
Ooh boy.
It was finally determined that they were looking for the house where my neighbor had just died. They were there to visit one of the beautiful daughters.
The woman who'd come to the door first apologized some more and by this time, I'd come outside the door and she actually started getting handsy with me. Talk about inappropriate.
And then, because their true destination was so close, they decided that they could leave their cars in my driveway and just walk across the street.
Y'all, this is not appropriate country behavior.
I cleared my throat and said, "Um, you know, I'm not sure I want you to leave you cars in my yard."
"Okay!" they said. And managed to drive across the street with a lot of waving and more apologies.
One of them had a little dog in her car. I felt sort of sorry for it. It appeared to be terminally anxious.

So that was exciting.

I did not go to Gibson's soccer game mainly because he didn't go either. But I told Lily that I'd come and get the kids for the afternoon. Before I left though, I uncovered my porch plants because there is no threat of frost for days, at least, and when I did, I found those eggs pictured above. The  hens were laying UNDER A SHEET!
Good god.
The eggs all passed the float test and so I kept them.

I had a good time with Owen and Maggie. Gibson didn't come because he had a date with the darling Lenore and his other grandmother. Maggie immediately started playing with toys. 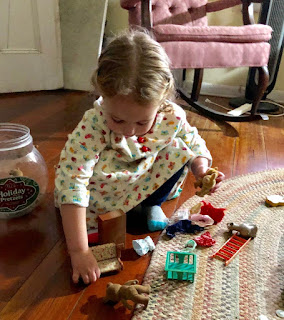 She loves to play pretend. Those little animals acted out entire scenarios, many of them having to do with a mother and a baby. The mother sang Rock-A-Bye Baby many times to the child. Sometimes the baby fussed but the mama always knew how to comfort her. She's wearing her new dress. She says she likes it.
Owen and I played a hot and heavy game of Battle. Guess what? He beat me again. I love playing cards with that kid.
There were snacks and juice, of course, and Maggie and I read some books on my bed and then we pretended that tigers and giant fish and dragons were coming to get us and we had to hide under the comforter.
"That was close!" she kept saying. I cuddled her and told her I would keep her safe and it's such a joy to feel her soft skin and make her laugh.
Boppy and Owen did some BB gun target shooting and I know they had fun too. 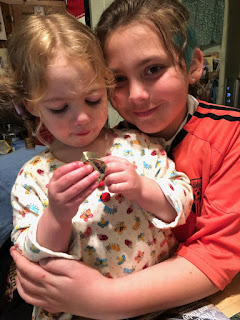 They are so beautiful to me. We had gathered eggs earlier and I cooked Maggie a scrambled egg after she ate her chocolate. She loves scrambled eggs and she helped me cook.
Then Jason came and off they went. When I kissed Maggie good-bye I gave her my mantra for her again.
"You are a strong, smart, powerful, beautiful woman!"
"I know," she said.
"I'm going to keep reminding you," I said.
And then I whispered to Owen, "You are my little prince."
He's too old for that but I know he still loves it.

And that was how it went in Lloyd today. I want to make it clear that I am not judging those women who came to my door. I have no idea what's going on in their lives and drinking at eleven o'clock in the morning may be exactly what they need to do. Far be it from me to look down upon anyone for the joy of day-drinking. Except well, they probably should not have been driving.

Here I go to check the progress of my soup, my rising dough, my roasting tomatoes.