What Place Is This? Where Are We Now? 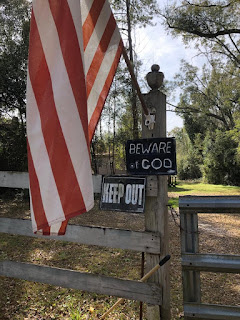 So how in the world have I missed this mess within half a mile from my house? It COULD be the result of a person with some sort of dyslexia trying to write "dog" but I'd bet the ranch a Trump supporter put it there. That just says it all, doesn't it?
I watched the damn stupid SOTU speech last night and was absolutely amazed that the man could read that many words for so long. I'm sure you know what I thought of the speech and I'm sure we can agree that Nancy Pelosi rocked the joint and was the boss of everyone without saying a word. 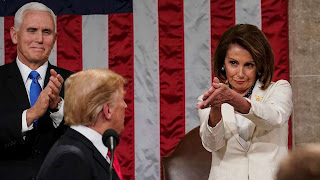 I loved all the ladies in white. They did some ruling of their own. And I was really looking forward to Stacey Abrams' response to the speech but I have to tell you that I was slightly disappointed. She was too nice and too pleasant. I wanted to see a little more fire which I know she's capable of. Her time, of course, was very limited but still- there was so much that Trump did not talk about which she could have brought up and I wish she had.

Speaking of fire, Jessie had a small one today in her car. She's been having battery problems and bought a new one yesterday and put it in the car and today when she was driving, all sorts of lights lit up and the car stopped running and most fortuitously she was on a road where she could slowly ease off the road. 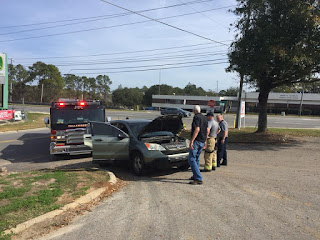 She noticed that it was smoking under the hood, raised it up and saw flames whereupon she got the boys safely out of their seats and away from the vehicle.
In another stroke of luck she was just a few minutes away from where her daddy works and he got there before the fire department.
Mercifully, no one was hurt, the car was towed to the shop, and Mr. Moon had a car he could lend to Jessie.  Hero Daddy. And of course Vergil had just left this morning for a work trip to Chicago. Isn't that always the way? I'm sure August had a million questions, all of them beginning with "why?"

Moving on. I actually took a walk this morning which is when I took the picture up at the top. I also took this one. 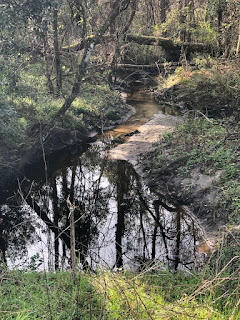 That's better.
I waved to the No Man Lord guy and several other people. I didn't drive over to White House Road to walk, I just walked the sidewalk as far as it goes in Lloyd and came on back. A small walk but a beginning. 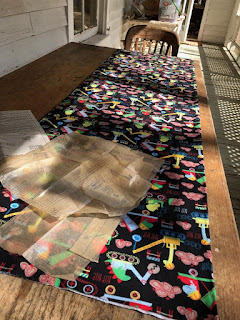 And y'all! I cut out August's dress on the table on my back porch and why have I not been doing this forever? Thank every one of you for suggesting a table because it just never occurred to me. And this really is a perfect table for cutting on. It's scarred and old and worn and kid-painted. I do have to clear all my stuff off of it but that's no big deal. So thank-you, thank-you, thank-you. I got it cut out and more than halfway sewn. It's a very simple pattern.
Which does not mean that the seam ripper hasn't already been in use.
To be honest.

I've got snapper filets marinating in mojo and orange juice and lime juice and achiote which I brought back from Cozumel in the form of paste and liquid. I'd never seen the liquid before and that's what I'm using tonight. I've picked some mustards and a few collards and kale from the garden and am going to saute those and cook some rice and that's going to be our supper.

It's felt so much like spring today that I've been thrown back into fifteen years ago when we moved in here and honestly, I'm a little sad. I would not mind some more cold, or at least our definition of it. I am most likely just looking for an excuse to hibernate which is what I still feel like doing. I think about all of the spring-things that need doing and I sigh in resignation.
At my age, the seasons roll around so fast that I can't keep up with where we are on the calendar.
I suppose I need to slow down and pay attention.

One more thing- today is the twenty-fourth anniversary of the death of a dear friend of mine. Her's was the first death I really and truly experienced. I went with her through diagnosis, treatment, and finally, death. We were the sort of friends who had no secrets and when she went on, there were four of us who loved her holding her and she went so peacefully, so quickly, that it was a gift to us all and I love her forever. And oh god, how I miss her still.
Susan Suchan.
Smartest woman I probably ever knew. And I probably danced with her more than I've danced with anyone else in my entire life.
There's so much more I could say but for now, I'll just say that I'm so lucky that she was in my life. I can look back and smile, even as I weep. And she made me feel more than ever that death is not anything at all to fear.