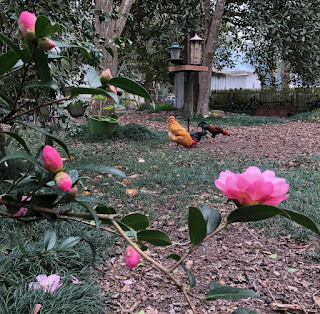 Today has been one of those days where everything feels off a step. A tiny beat behind the music messing up the rhythm. We all have those days. Nothing really horrible, just tiny speed bumps like the strips they lay before a four-way stop at a big intersection to tell you to slow down as they interrupt the smoothness of the ride.
I can't even point to any incidents to illustrate this. It's just felt this way.
Something's off.

Right now the chickens are deciding roosting arrangements. Ringo and his three hens always sleep in trees these days and more and more of Dearie's children are joining them at night. There is fussing and great flapping of wings as the chickens prove their birdness by flying up into the branches. I can't help but wonder what it is that motivates these wayward chickens to sleep outside. I see no real benefit to it. The two roosters may feel as if the hen house just isn't big enough for both of them but in all actuality, it certainly is. Up until recently they even slept in the same nest box but something has changed that. The trees are certainly not as safe to sleep in, I would think, and sometimes it's cold and sometimes it's raining. Plus, in the mornings, the tree-sleepers do not have access to the coop where the feeders are which is a huge thing, I would think. They have to wait for me to go and open up the door of the hen house so that they can rush in and eat.
Oh, who knows?
Not me.
I tell you what I do know- I have too many fucking roosters. 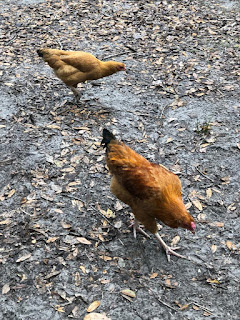 These are two of the Dearie/Liberace chicks. The one in the rear is a hen, I think, while the one in the foreground definitely seems to be growing tail-feathers and is noticeably larger. 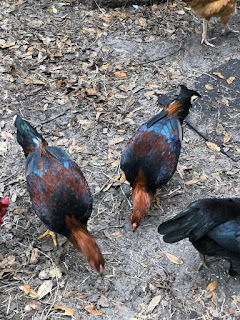 Here are two of the Dearie/Ringo chicks and aren't they beautiful? I have a feeling they are both roosters. I don't think the females are this brightly colored although the one on the left MAY be a hen as her tail feathers seem to point down like his (her's) Aunt Vera or Viv's whose butt is also in the picture.
And that's just a few of the eight. I haven't actually made a count of them all yet as to who appears to be male and who appears to be female but casual observance seems to show a preponderance of males and I do not know what I am going to do and yes, I have discussed this before but this is one of the things I've pondered today as I went about the yard work I was doing.

I trimmed and pulled and dug up roots and then I finished weeding the carrots and was attacked by ants who stung me. The only thing that made all of this bearable was the book I'm listening to which is Big Little Lies by Liane Moriarty. I think that Amazon has done a series based on this book but I haven't seen it and just by the name of it, had some preconceptions which have turned out to be completely false. Some may call the book by that horrible name Chick Lit but I am enjoying it tremendously and the narrator is great and the characters are excellent and the insights and writing itself keep surprising me. So there is that.
Why is a book whose main characters are all women called something so demeaning as Chick Lit? What do they call a book whose main characters are all men? Do they call it Dick Lit? No. They do not. They simply call it literary fiction.
Fuck that.

As you may be able to tell from my use of the word "fuck" in this post, I am not in the best of moods. I do not know why. I guess it's all part of this speed-bumpy, off-rhythm day. And I should be in a good mood! I actually did some physical labor AND yes, I did clean out the knife drawer. I can now open it without something getting stuck. 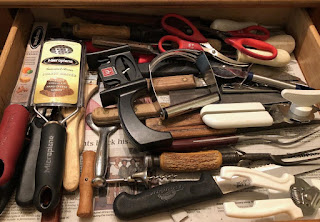 So impressive. I know.

Well, some days are just like this. You have to just get on with things until the end of it and go to sleep and hope that you'll found the rhythm again in the morning.

Dance in peace, y'all.