A Lot Of This, A Little Of That 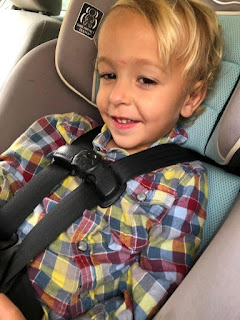 I got a visit from two boys and their mama today. Jessie decided that the quarantine period was over and out they came for some Mer time. I was very glad to see them. We were so busy that I forgot to take any pictures until they were leaving. 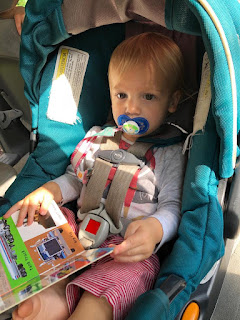 Levon loves this book. He is obsessed with it. It's a baby board book and the whole thing is about big trucks and other large vehicles and earth-moving machines. Talk about your stereotypes.
He did play with the babies a little today. Not much. But a little.
I remember when Hank and May were very young and a woman I knew also had a young child and she was incensed that she was finding it so hard to find non-gendered clothing for her little boy. I could not figure out what she was talking about. My kids mostly wore corduroy overalls and t-shirts. In primary colors. What was gendered about that? I will say that May had a little nightgown with a robe she wore as dresses. She was too young to make the distinction between day wear and night wear and now I realize she was just ahead of her time. She loved those things and for a time wore them, one after the other, to the exclusion of all other garments. She liked dancing in them.
But she chose them. Not me.
I've always thought you should just give kids the option to play with a wide variety of toys to play with and a wide variety of books to look at and read. Same with clothing. They'll let you know what they're interested in. Maggie may love to play ball with her brothers but let's face it- her dollies are her favorite. What purpose would it serve to try and distract her from doll play to play with trucks if trucks aren't really her interest? Trust me, there are plenty of trucks around for her to play with.
To go back to that story about the mother who couldn't find non-gendered clothing for her son, why couldn't she just have given him a choice of different clothes and different colors and let him pick? August and Levon sometimes wear what we would label "girl" clothes and so what if they get mistaken for the opposite sex when we go out? They're three and one. And no one has ever made them feel as if being a girl is a lesser thing than being a boy or being mistaken for a girl is shameful. It's just different. Pink and blue have no meaning at all to them except they're different colors.
Of course in my family, gender is something we've all learned is in some ways a lot more complex than we think and in other ways, a lot less important than we've been led to believe.
And I am so grateful for this.

I'm not sure why I felt the need to step up on my soapbox right there. Was I defending Levon's choice to be obsessed with a "boy" book?
Haha.
That would be funny.
Long story short- the kid loves trucks.

When I heard that August and Levon were coming this morning I waited to go to the dump and the post office until he got here.
Yeah. I know. I'm a great grandmother.
Not a great-grandmother. Or is it greatgrandmother? I don't know.
He loves that, though. Sitting in that big boy booster seat with just a seatbelt as we drive the entire block and a half to the dump.
When we pulled out of the yard I said, "I have to be very careful."
"Why?" he asked. Of course.
"Because you're in the car and you're precious. Did you know that you are precious?"
"Yes. Why?"
Oh my.
When we got to the post office and I helped him get out of the car he asked, "Why I have to stay in the car at the dump but I can get out at the post office?"
"I guess I thought that the dump isn't very fun but the post office is."
He thought about that and didn't say anything so I guess my answer was sufficient.
We talked about how the post office used to be a train station.
"Do you know what that is?" I asked him.
"Where the trains stop," he said.
We talked about that. How the trains used to carry people and they would stop and get off or else buy tickets and get on at the train station. But that now it's a post office because the trains don't stop here anymore.
"Why?"
Oh god.
Then he asked me if this was still Lloyd. I suppose he's trying to figure out what that means. This led to a discussion about how he lives in a city but I live in a village which is much smaller than a city.
"I like living in a little village," I told him.
"I like living in the city," he said.
"You don't want to live in a village?" I asked.
"No. I would miss my mudder and my fadder."
He really says that.
Calling Alan Sherman.
Three points if you get that reference.

So. Bernie.
My opinion on that is- Fuck you, Bernie! Don't you think you did enough harm in 2016? For Christ's sake. I will NEVER forgive him for taking votes away from Hillary. Never. In trying to win in an impossible situation he fucked our country so hard it may never recover.
Well, the Russians had something to do with that too.
And who knows who else?
Still.
Fuck him. And his ego.
Go ahead. Tell me how great he is. I don't care. My point is valid and you know it.
If I vote for another old white man in 2020 his name is going to be Joe.

My god I miss Obama so bad it hurts my heart.

All right. I don't have time to write about politics. Or the Catholic Church. Not unlike with Trump it would appear that the layers to the reeking rotten onion which is that institution never end.
I swear. If I were an all-powerful god, I'd probably just do another great flood. This planet sure could use another cleansing of humanity.
Oh. Wait.
We're going to do it for ourselves.
Maybe not a flood this time but you know what I mean.
Tragically, this is not a joke, simply a horrifying and terrifying truth. It's gone way past inconvenient and is now ghastly.

I'm going to go make some egg rolls now. Kathleen used to say that she was an ostrich who carried around her own bucket of sand to stick her head in.
Aren't we all?
Still, we must eat in order to strengthen ourselves, our hopes, our resolve.