You're Not The Only One

Mixed emotions today. Didn't walk. Exhausted, sore, and it was raining.
Instead I went to Lily's and picked her and Magnolia June up to meet Jessie at Costco- our default outing. Maggie was so excited to see Auggie (as she calls him) and Baby (as she calls Levon) and the two older cousins sat together companionably in the huge cart with Levon in his seat behind them. 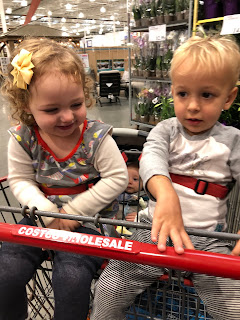 "Can you put your arms around each other?" Lily asked. 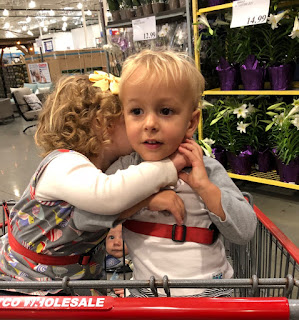 As usual, Maggie was happy to put her arms around her Auggie but her Auggie was not so enthusiastic about it.

August agreed to the coldy room today. In fact, he and Maggie both found it hysterical for some reason. 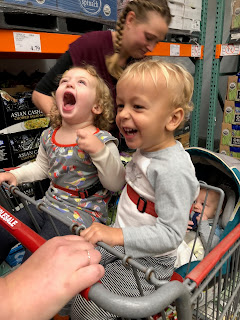 Nothing in the world could make me happier than watching those two laugh together. A few times today I saw Levon laughing with them but with a slightly puzzled expression on his face- what was the joke? He was not sure, but he was laughing with the big kids.

We had some tasty samples and because it is Happy Day They Crucified My Lord, which means that Bunny, Egg, and Basket day is coming up, I bought a small ham. I think that some of the kids are coming over Easter morning. I hope so. I bet I spent a hundred bucks a few weeks ago on Easter baskets and stuff to go in them.
Was I insane?
I must have been a slightly bit manic. I don't know.

And then we went to the Indian buffet and it was good, as always. I carried August into the restaurant and when I opened the door he said, "I smell chopsticks."
So. Now you know- chopsticks smell like Indian food.
After lunch we went to...oh, you guessed it- the Goodwill bookstore where books and a giant T Rex floor puzzle were purchased.

So that was all good fun and especially beautiful when we were walking back to our cars and I was holding Maggie's hand and August was holding her other hand and he said, "I holding Maggie's hand," and we strolled along and I don't know why but whenever that happens, I am just slayed. These little people, cousins, so very, very different in every way but still paired for all of life and seemingly content with that.

Mr. Moon is getting ready to go down to Apalachicola for his annual fish-and-lounge-about-visit with his sister and then he's going to go to Dog Island with old friends from Tennessee. Grouper season is about to begin. He did the most loving thing for me last night. He bagged up a bunch of oak leaves for me to use on the garden and some of you will understand the deep sweetness of this gift.
Anyway, for awhile it's going to be me and Maurice and Jack and the chickens and I am sure we will be fine. Maurice has been creeping into our bed every night, so quietly and stealthily that we do not know she is there until we wake up to find her in a nest of pillows near the window. I love to wake up in the middle of the night with her there. She is a comfort. And Jack usually sleeps on my feet, keeping me as grounded as one of those weighted blankets. The boy has become quite stout.
But even two cats can not replace the presence of that man beside me in the bed.
I will miss him.

And tonight I am having a bit of the anxiety. When I got home this afternoon I did something I rarely, rarely do which was to go sit on the couch and watch TV.
Unheard of!
But I did it. And the world still appears to be spinning as it should be.
I am not at all sure that I don't have some sort of sinus thing, perhaps a reaction to the oak pollen, or perhaps just a manifestation of my anxiety which is how it usually presents itself.
Whichever and whatever, it's hardly life-threatening.

What I watched on TV was an episode of the documentary Wild, Wild Country about how the followers of an Indian guru named Bhagwan Shree Rajneesh took over a part of Oregon in the 1970's and as I am watching it, I am absolutely gobsmacked at how people will do anything, anything at all, for someone whom they consider to be a representative of a god. The older I get, the more I truly do understand that there is a part of human nature which feels the need to be in touch with the spiritual part of this universe and that there have been and are and always will be, someone who will step forward to claim that he or she has the one and only true path to that and will be happy as hell to take your money, your devotion, your love and your common sense and will probably eventually be found in bed with at least one, if not many, comely devotees.
I've just never been able to jump on any of those parade floats and if I ever do, please know that I am suffering from some horrible neurological problem and ignore everything I say.

Oh well. As I said, it is Happy Day They Crucified My Lord and why the Christians claim that Jesus Christ suffered more for YOU and ME than any human ever suffered on earth while there were supposedly two other men being crucified at the very same time is beyond me.

It's all beyond me.
Which is why I've always loved rock and roll.
This video is from the eighties, y'all, so please try not to judge although I will say that Keith (who is not a god, trust me, nor ever did he claim to be) is pretty cute in it.


This was from the Steel Wheels album, released in 1989 at which time people were aghast at the idea that the Rolling Stones would still be playing that rock and roll music at their advanced age.

It's okay to have mixed emotions.
We're human beings. We should be able to handle that.