Organizing Overalls And Jewelry, Trying To Make Sense Of It All 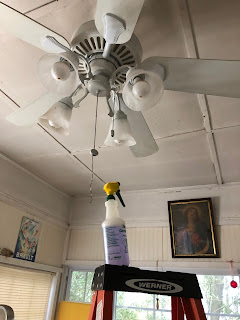 Ugh. That was when I was cleaning the ceiling fan in my bathroom today. It took me at least half an hour. AT LEAST! And I hated every second of it.
And then it took me just about the rest of the day to clean the whole bathroom, literally top to bottom, and put most of my stuff away in my drawers. I did almost fill up a trash bag with what I got rid of and I also organized my overalls.
Sort of.
And jewelry.
Sort of.
I simply hate cleaning. It's boring and it's frustrating and it requires you to stand on ladders and get down on your knees and make ten thousand trips from one room to another to put stuff in places where it belongs (mostly the laundry) and collect stuff (like KaBoom! cleaning foam) and then sometimes mop buckets spring a leak and you don't realize it until a huge rug is sodden and you can't do anything but put a towel under it because a bed is holding it in place.
Etc.
But. It is so lovely when it's done, even if you have the niggling feeling that it could have been done so much better. 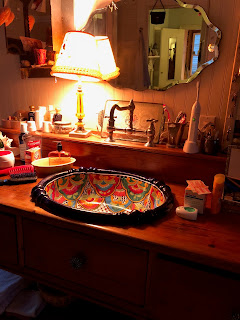 But. Still. Better. Maybe not worthy of what Mr. Moon has done but a little bit better.

I went to Joanne's Fabrics the other day to get material to make that window panel and I couldn't decide between two different prints and so I got some of both and I do believe I got overcharged and when I got them home, I decided that neither will do in there. I like the fabric prints and will probably make curtains for other windows with them but that did not solve the privacy issue in the bathroom. Right now I have a Kantha cloth throw in the biggest window and two yellow panels beside it and at least I can undress without worrying about anyone seeing my precious naked body.
Haha!
And the curtains I was going to hang in the windows with the blinds are absolutely not right in length and since they are beautiful lace curtains (they came with the house) I can't just cut them off and hem them. So. I have to deal with those, too.
Obviously, this is an ongoing project.

Meanwhile, life goes on and I've been doing laundry all day, sheets and clothes and towels and cleaning cloths and rugs. I am cooking the last of the field peas I grew and we shelled last summer and some lovely collards and mustards which are just about to bolt. The mustard greens have grown to an absolute other-worldly immensity. Some of the leaves could be used to wrap baby Levon in. And wouldn't that be darling? 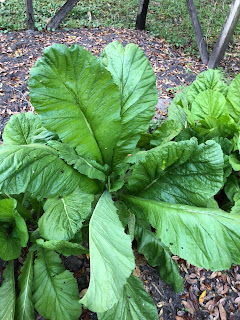 There is nothing to show scale here but let me just say that if the chickens wanted to nip those top leaves, they'd have to stand three on top of each other and still reach up. They are taller than August and Maggie, I am sure.

The Bradford pears have put their pretty white petticoats on and the wisteria's blossoms are forming so fast that there is a definite difference between what I see in the morning and later that evening. The bridal wreath spirea is just starting to put out its tiny bouquets of flower blossoms.

Before long, the entire plant will covered in hundreds of those fairy bridal wreaths.

At one point today I saw over a dozen cardinals either at or around the bird feeder and every time I look outside I see red-headed woodpeckers and when I walk, I often see the huge pileated ones, gathering the air in gulps with their wings, flying in the pines.
Spring is coming whether it is time or not and to be honest, I have seen spring here at this time of year before. It will soon be proper to plant tomatoes and beans, squash and cucumbers. The peas are coming along nicely and before I know it, will have leapt up to catch themselves on the fence with their clever tender tendrils and will start putting out their own sweet little blooms. The azaleas are about to be a glory, the Buckeye tree has bloom on it, the wild phlox are pushing up green leaves amongst last year's stalks, and so is the firespike. Before I know it, we will be kicking bamboo.
But for the next few days it is supposed to get cooler again and I am as happy about that as I am about seeing the wisteria buds.

Time to make the cornbread. And have you gone outside to look at the full moon?
Please do.