Sometimes There Is Nothing More Powerful Than Silence 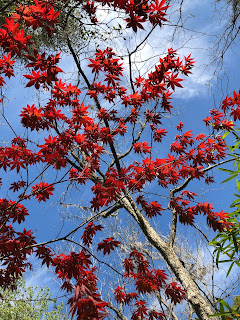 Can you believe that picture? The Japanese maple that was given to me by the former owner of this house at the signing fourteen years ago. That shot has no filter, no nothing. That's just what the camera saw and it is almost exactly what my eye saw, as well.

Another incredibly beautiful day and Mr. Moon, with his strong muscles and hand cart took the rest of the plants out to the porch today and I did indeed fertilize and water them. He also moved my Roseland mango from the laundry "room" to its spot outside which doubled the space in the area in which I wash clothes. Last year I did not bring it in and it froze back hard but I was patient and it was hardy and it came back again. I was taking no chances this year.

I kicked bamboo which is still coming up with its preternaturally swift growth and while I was out in that part of the yard, I took a picture of the tung tree blooms. 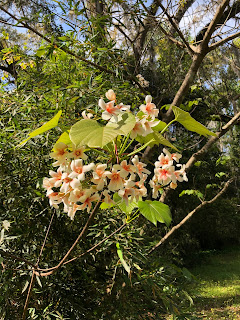 The azaleas and the camellias are spent and done except for a few flowers loathe to leave the branch. The wind we had the other day stripped the azaleas a little prematurely I think, but they really are only a fleeting glory which is all the more reason to cherish them while they are here.

I girded my loins and went out to the garden and mulched from the bags my husband had collected in town. Some of the bags were so heavy that it took all of my strength to pull them down rows and rip them open and spread the wealth. They were pretty good bags, no trash in them whatsoever, and some of them had contents which appeared to have gone through a shredder of some sort and those were already starting to compost and were giving off the heat of that process. The beans are already breaking ground and I really, really, REALLY need to harden my heart and pull the arugula and the little nubs of lettuce still standing although the collards and the kale are still fine and of course the onions and the shallots are too. And Lord, the carrots are plentiful and the beets- well, I just need to pickle some damn beets and that's all there is to it.
Next week?
Because it is so time to put the tomatoes in, to plant the cucumber seeds, the squash. Maybe some corn, since I didn't plant potatoes this year? That might happen. And oh, okra! Because even though I made pickled okra last summer as if it were a paying job, my cabinets are almost bare of it.

While I was pulling and tugging and spreading mulch today I was inwardly cursing, even though the day has been pretty cool and there was a nice breeze. It's just so much work and it makes me feel inadequate which is the last thing I need to feel, and I kept thinking, let it go, Mary. Let it go.
But then there's this. 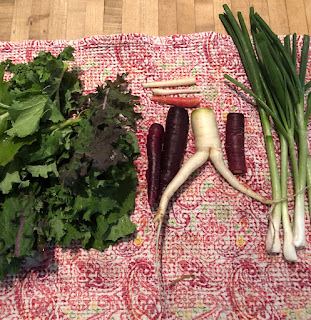 Which is what I just picked and washed for the soup tonight. Look at Mr. Carrot run! Although I guess it's more of a Ms. Carrot. Yes, the garden is so much work but the pleasure of being able to go out and pick what we're going to eat for supper is just so worth it.

After all of the bags were empty, I came in and watched the march coverage on CNN and I am so in awe of Emma Gonzalez and hell, of all of those kids, that I can hardly stand it.
I can't even talk about what Emma did without choking up so that my words are blocked in my throat. There's something about that girl. And I'm not going to sit here and say, "Oh, she is destined for greatness," because no matter what she does after this (could there possibly be an after this?), she has already displayed a sort of magnificence that we do not often see.
And if I were her mother, I would be terrified for her at the very same time I was completely blown away by her splendid being.

Well. So the day has passed. 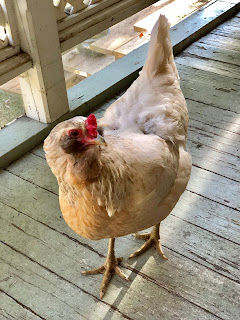 Miss Camellia, giving me the beady little eye, trying to mind-warp me into giving her more cat food. 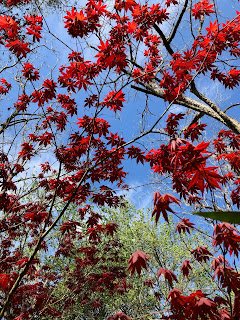 Another shot of the Japanese maple against the blue spring sky.
Now THAT is what scarlet looks like.

Peace, y'all.
And love.
And a little more hope for the future than I had yesterday.