It Wasn't A Terrible Sunday But It Was Sunday 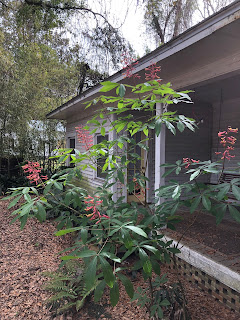 Well, I will say this about the time change- in a way, we get to go to bed an hour earlier. Now, don't get me wrong- I realize that we will be getting up an hour earlier as well but... one never knows. A comet could hit the earth tonight as we sleep, wiping out all known life forms and then we would never, ever have to get up early again for any purpose whatsoever.
Just call me the Pessimistic Optimist. Or would that be the Optimistic Pessimist?
I am not sure but we'd certainly never have to worry about getting another colonoscopy either.

It's been a workday around here. Mr. Moon finished putting the ceiling in his bathroom and also almost shot himself through the hand with a nail gun but fortunately, he only grazed his hand and I am so grateful because I'm pretty sure that if you shoot a two-inch nail into your hand a trip to the ER is going to be involved and most likely some surgery.
Some things just cannot be taken care of at home even with wound glue and golden seal.

I worked in the garden almost all damn day long and really got nothing accomplished except being swarmed and bitten by red ants.
Fuck red ants.
And these were the big fuckers that can bite through gloves and fabric.
If a comet hit the earth, the red ants would probably survive but they wouldn't have any humans to bite which would really piss them off.
And no jokes about how Keith Richards would survive because he is a human being and he would not. Poor guy. He spent the first forty or so years of his life being #1 on the Rock Star Most Likely To Die list and now they make jokes about he and roaches being the only things that would survive a nuclear war.
Was that grammatically incorrect?
I have no idea.

Obviously I really don't have anything to write about tonight. It was just a regular day and I didn't find any eggs in the garden and I didn't discover how to lose weight without diet or exercise without involving serious illness and I didn't plant anything although I did pick some carrots and shallots. I need to start thinking about pickling some beets and carrots and onions and that prospect is a bit exciting. Here's a picture of a wisteria blossom. 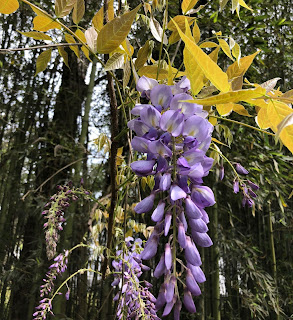 I took that when I was out kicking bamboo. I'm trying to stay on top of that but I'm pretty sure I'm missing a lot of it which I will discover when it is suddenly eight feet tall.

I'm going to go make a shepherd's pie now.
Shepherd's pie is one of Keith Richards' favorite things to eat so you know it's not only good, it's good for you.

I'll be back tomorrow unless the comet hits the earth in which case no one will know and no one will care. Don't you find that prospect just the least bit comforting?
I do.

P.S. I am glad that so many of you like the new header picture. It's the second picture I've used painted by the Mexican artist, German Rubio. His work is endearing, is it not?
Posted by Ms. Moon at 7:02 PM