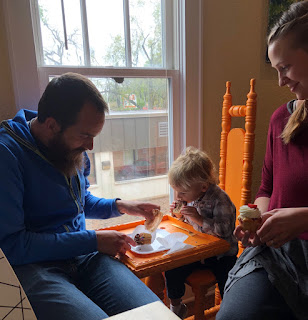 This morning was rough in the way that some mornings are very hard to negotiate as to reason to live and courage to do the same, but I took a decent walk and that helped a lot and then I drove to town where Jessie and the boys and Vergil and I all ate lunch at a very good sushi restaurant which was not Japanica. It's called Izzy's Pub and Sushi Bar and it is cozy and interesting and you know it's awesome because they've hired Hank to do trivia there on Monday nights. In the same building is a small bookstore, locally owned, and upstairs from the bookstore is a cupcakery.
So. Pretty much perfect, right? 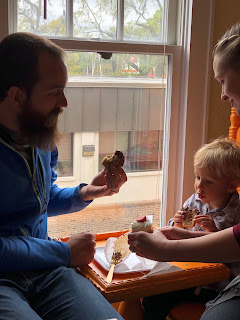 I did not have a cupcake but I did buy a book. And I will go back.
As Jessie and Vergil and August were enjoying their desserts, Jessie said, "If I didn't have children I would spend so much time here, eating delicious cupcakes and reading books."
Isn't that a nice fantasy?
Of course it's fun to take the children there but even a mostly well-behaved two year old can cause some damage. And we agreed that when it's a locally owned place, you know that everything in the store has been purchased on a narrow budget.
But it is as child friendly as it can be. There's a little nook for reading books with a beanbag chair that Vergil and August made use of. 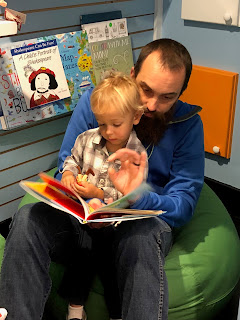 This boy got some milk. 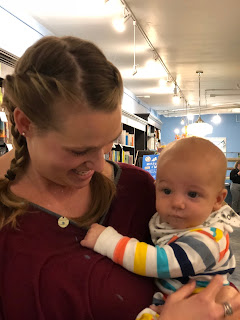 But I could tell that he really wanted a cupcake.

And then Jessie and those cute little guys and I proceeded on to the nursery which was our main destination where we bought a few things for our summer gardens. Tomatoes, peppers, eggplants. And I did buy a packet of corn seeds.
A fun experiment, perhaps.

And so I was saved once again by the sweet and powerful pull of the love of my babies. It is impossible to feel entirely hopeless when one is greeted by a small boy who raises his arms and yells, "It's MerMer!" when he sees you walk in the door and then grabs your arm and says, "Come," and shows you the bird feeder that he and his mama made and put up where the birds are now coming to eat. And when the littlest baby wakes up from a nap and sees you and smiles.

It is all a comforting balm for the heart and for the soul, a dispelling of darkness to be replaced with the light of children.
And sushi. And books. And a nursery filled with beautiful plants and pots and fountains and statues. We shall see what tomorrow holds.