In Preparation For The Great Ham Fest And Abandonment By Husband 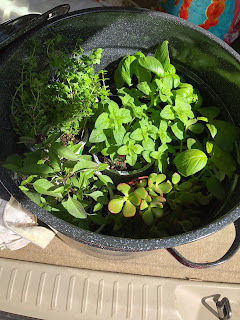 Odd day. First of all, I did not wake up until 9:46. I mean, I didn't even wake up earlier and go back to sleep. I was too busy sleeping to wake up and go back to sleep. Also, I was having dreams about having dreams (hard to get a cup of coffee at a bar late at night so that you can wake up from the dream you are aware you are having) and also, I delivered a neighbor's baby and then we went on a road trip without the baby which worried me considerably.

Anyway, due to circumstances which I will be discussing soon (and nothing bad has happened), Mr. Moon needed to retrieve two vehicles from the bank where his office has been. This meant that we had to drive to town, get the two vehicles, drive them back to Lloyd, and then drive back to town to get the truck we'd driven into town originally.
For some reason, I did not mind this at all. It has been a beautiful day and driving around listening to NPR doesn't suck although when Laurie Anderson spoke in an interview I got a stomachache and then had a small anxiety attack where I felt I could not breathe properly for awhile but then I got over it and was okay.

On my final journey home I stopped at the horrible, dreaded Walmart and bought what you see above. A new canning kettle and some herbs and a small jade plant.
I did survive Walmart.
And then I planted my herbs and unloaded the dishwasher and finished some laundry and took the trash and watered the porch plants and looked up recipes for cinnamon rolls and discarded that idea of making cinnamon rolls and have butter softening to make angel biscuit dough for tomorrow's Ham Fest and egg hunt and picked and washed kale and shallots to make the frittata for tomorrow and I made up the Easter baskets. 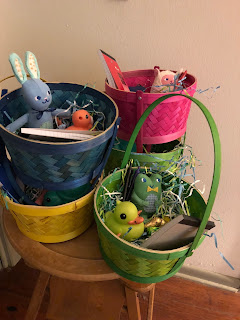 They sort of suck, especially considering that the chocolate melted and reformed but at least Maggie and August will not notice that nor will they care.
But hey! It's the thought that counts and they all got a bath tub toy, a small stuffed animal (I like the frog), a little notebook and two colored pens.
Except for Levon who got a teething toy that says "My First Easter" and a small stuffed chicken.
Or something. I can't remember.

And now I have to make supper and the angel biscuit dough and teach Mr. Moon how to give himself his own B-12 shots because he's leaving tomorrow and that is a harrowing thought on many levels.

Also, I got four eggs today which is sort of an Easter miracle.
I do not know if He is risen, but let's hope the biscuit dough rises into great puffy heights of pure biscuit goodness.

P.S. Mr. Moon jabbed himself in the thigh with great aplomb and why I was worried, I do not know. He could probably go see Laurie Anderson in the flesh and not get a stomachache although I seriously doubt that proposition will ever be tested.
Posted by Ms. Moon at 7:43 PM